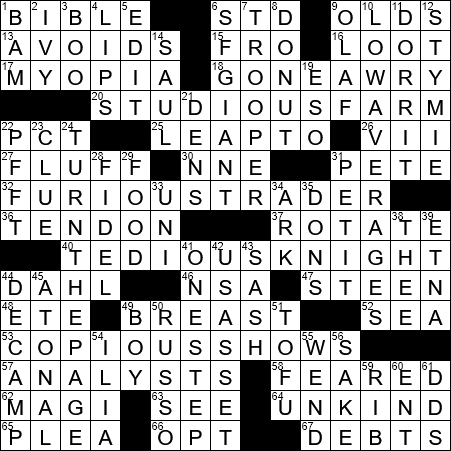 Debts may take the form of IOUs. Today’s themed answers are common two-word phrases with the suffix -IOUS added to the first word:

The Bible is the best-selling book of all time, with annual sales running at about 100 million copies.

Ransom Eli Olds was a pioneer in the automotive industry, and the founder of the Oldsmobile and REO brands. Olds introduced the first modern stationary assembly line (Henry Ford’s famous innovation was the moving assembly line).

Pete Rose was a talented baseball player who holds the record for all-time Major League hits. Rose’s nickname was “Charlie Hustle”. In recent years of course his reputation has been tarnished by admissions that he bet on games in which he played and managed.

The Achilles tendon is located at the back of the leg, above the heel. The name is a reference to Achilles, the hero of Greek myth who was invulnerable in all of his body except for his heel.

Sir Lancelot was one of the knights in the legend of King Arthur and the Round Table. Lancelot was the most trusted of Arthur’s knights when it came to battle, but off the field he had a poorer reputation. Famously, Lancelot had an affair with Guinevere, Arthur’s wife.

Ted Knight was the actor best known for playing the slow-witted news anchor Ted Baxter on “The Mary Tyler Moore Show”. Knight’s most famous role on the big screen was Judge Elihu Smails in the 1980 comedy “Caddyshack”.

“The BFG” is a 1982 children’s book by Welsh author Roald Dahl. The initialism in the title stands for “Big Friendly Giant”. Dahl dedicated “The BFG” to his daughter Olivia, who had passed away at the age of 7 in 1962.

Columbia University is an Ivy League school in New York City. Columbia’s athletic teams are called the Lions, thought to be a reference to the lion on the English coat of arms. Prior to the American Revolution, Columbia was called King’s College as it was chartered by King George II in 1754.

Revlon was founded in the depths of the Great Depression in 1932, by Charles and Joseph Revson. The “S” in the Revson name was replaced by the “L” from Charles “Lachman”, a chemist who partnered with the two brothers.

AT&T Park is a baseball stadium located on San Francisco Bay that is home to the San Francisco Giants. It opened for business in 2000, replacing Candlestick Park as the Giants’ home stadium.

In the 2013 animated film “Frozen”, Olaf is a happy-go-lucky snowman who provides a lot of comic relief in the movie. Olaf is voiced by actor and comedian Josh Gad.

“Little Dorrit” is a novel by Charles Dickens, a satirical work that takes potshots at the government and society of the day.

Fidel Castro studied law at the University of Havana and there became a follower of left-wing ideals. He launched his first rebellion against Cuban president Fulgencio Batista in 1953, which landed him in jail for a year. He later led rebels in a guerrilla war against the Cuban government, which led to the Cuban Revolution and the overthrow of Batista in 1959. Castro took control of the country, and immediately formed a strong relationship with the Soviet Union. Concern over the alliance in the US led to the botched Bay of Pigs Invasion of 1961. There followed the Cuban Missile Crisis in 1962. Fidel Castro started to transfer power to his brother Raúl in 2008, and passed away in 2016.

“Raiders of the Lost Ark” is, in my humble opinion, the best of the Indiana Jones franchise of movies. This first Indiana Jones film was released in 1981, produced by George Lucas and directed by Steven Spielberg. Harrison Ford was Spielberg’s first choice to play the lead, but Lucas resisted as he was concerned that he would be too closely associated with the actor (as Ford played Han Solo in “Star Wars”, and also appeared in Lucas’s “American Graffiti”). Tom Selleck was offered the role but he couldn’t get out of his commitments to “Magnum, P.I.” Eventually Spielberg got his way and Ford was hired, a good thing I say …

A don is tutor or fellow at a university, especially at Oxford and Cambridge in England.

Mount Etna on the island of Sicily is the largest of three active volcanoes in Italy. Etna is about 2 1/2 times the height of its equally famous sister, Mt. Vesuvius. Mt. Etna is home to a 110-km long narrow-gauge railway, and two ski resorts.

Toyota Motor Manufacturing Kentucky (TMMK) is an automobile manufacturing facility located in Georgetown, Kentucky. The factory opened in 1986, when it was Toyota’s first car manufacturing plant in the US.

Tiny Tim is the nickname of Timothy Cratchit, the little disabled boy in the Charles Dickens novella “A Christmas Carol”.

Ginza is a district in Tokyo that is noted for its western shops, and especially the leading fashion stores.

25. Arrive at hastily, as a conclusion : LEAP TO

8. Bakery item with some shortening? : DONUT

10. What most pitchers have, as batters : LOW AVERAGES

44. Pack up the tents and supplies : DECAMP