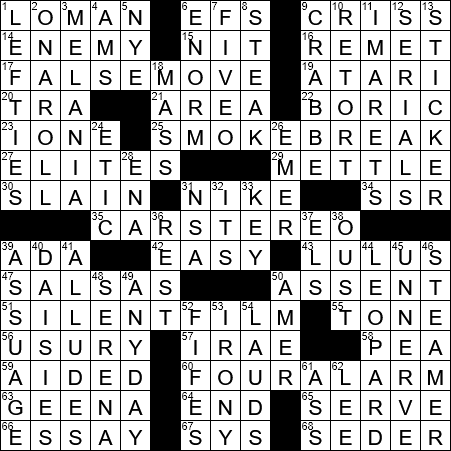 Today’s FOUR themed answers each start with a type of ALARM:

That would be the letter F (ef).

“Criss Cross” is a 1949 black-and-white film noir that is based on a 1934 novel (titled “Criss-Cross”) by Don Tracy. The movie’s cast is headed by Burt Lancaster and Yvonne De Carlo. “Criss Cross” was remade in 1995 as “The Underneath”.

Boric acid is a weak acid that usually comes as a white powder for domestic use. The powder can be dissolved in water and used as an antiseptic.

Ione Skye is an American actress born in Hertfordshire in England. She is best known for portraying the character Diane Court in the 1989 high school romance movie “Say Anything …”, starring opposite John Cusack. Skye is the daughter of the Scottish folk singer Donovan.

“Mettle” is such a lovely word. It means “courage, fortitude, spirit”. “Mettle” is simply a variant spelling of the word “metal”.

A “doozy” is something extraordinary or bizarre. The word’s exact origins aren’t clear, but it might be a derivative of the name Eleanora Duse, an Italian actress popular early in the 20th century. Some say that the term comes from the Duesenberg brand of automobile, which was indeed referred to as a “duesy”. However, the use of “doozy” in print occurs before the Duesenberg hit the market.

“Usury” was originally the name given to the practice of lending money at interest, but the term now refers to lending at excessive rates of interest.

“The Accidental Tourist” is a 1985 novel by Anne Tyler. The book was famously adapted into a 1988 movie starring William Hurt, Kathleen Turner and Geena Davis (who won a Best Supporting Actress Oscar for her performance).

A southpaw is a left-handed person. The term arose as baseball slang in the mid-1880s to describe a left-handed pitcher. Back then, baseball diamonds were often laid out with home plate to the west. So, a pitcher’s left hand would be on his “south” side as he faced the batter.

When President Donald Trump took office, his wife Melania Trump was the first naturalized US citizen to become First Lady of the US. President Trump’s wife was born Melanija Knavs in the city of Novo Mesto in Slovenia, which was then part of former Yugoslavia. But, Melania Trump isn’t the first First Lady born overseas. That honor goes to London-born Louisa Adams, the wife of President John Adams.

Michelle Obama née Robinson grew up on the South Side of Chicago and is sister to Craig Robinson, former coach of men’s basketball at Oregon State University. After graduating from Harvard Law School, Michelle Robinson worked as an associate at the Chicago office of the Sidley Austin law firm. Barack Obama joined the firm as a summer associate and Michelle Robinson was assigned to mentor him, and as they say, one thing led to another …

The cop show “Hawaii Five-O” originally ran from 1968 until 1980, with Jack Lord and James MacArthur playing detectives Steve McGarrett and “Danno” Williams. The famous theme music was composed by Morton Stevens. The show was rebooted as “Hawaii Five-0”, premiering in 2010, with Alex O’Loughlin and Scott Caan playing Steve McGarrett and “Danno” Williams. Notice the important difference in the titles of the two versions of the show: the former using a capital letter O, and the latter the numeral zero.

As an actor, Buster Crabbe was best known for playing Flash Gordon and Buck Rogers. Before taking up acting, Crabbe was a championship swimmer, the winner of the 1932 Olympic gold medal for the 400 meter freestyle.

Imarets were inns or hostels used by pilgrims throughout the Ottoman Empire. The network of imarets was set up to provide food to anyone in need, so they also served as “soup kitchens”.

The four “big cats” are the tiger, lion, jaguar and leopard. The smallest of these is the leopard.

Lee Trevino is an American golfer of Mexican descent, and so has the nicknames “The Merry Mex” and “Supermex”. He is well known for his great sense of humor and for playing pranks on the golf course. For many years, Trevino wore a Band-Aid on his arm while playing, covering the tattoo with the name of his ex-wife.