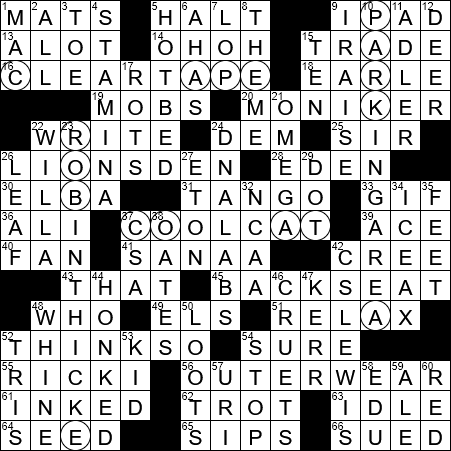 The OUTER, circled letters in each of today’s themed answers give us items of OUTERWEAR:

Steve Earle is an American songwriter and performer, and someone with a reputation of having lived a hard life. Earle’s brushes with the law and drug addiction problems have earned him the nickname “the hardcore troubadour”.

A group of lions is known as a “pride”. It’s possible that the term “pride”, in this context, derives from the Latin “”praeda” meaning “prey”.

In 1987, CompuServe introduced a new type of image file called the Graphics Interchange Format (GIF). A GIF image takes the same information as a bitmap and then compresses it, resulting in a smaller file size. However, during compression the image may lose some resolution. The GIF format also handles short video clips, usually animations.

The JPEG file format was created by the Joint Photographic Experts Group (JPEG), hence the name.

A “duffer” is a golfer, and not a very good one.

Sana (also “Sana’a”) is the capital city of Yemen. Sitting at an elevation of 7,380 feet in the Yemeni Mountains, Sana is one of the highest capital cities in the world. Within the bounds of today’s metropolis is the old fortified city of Sana, where people have lived for over 2,500 years. The Old City is now a World Heritage Site. According to legend, Sana was founded by Shem, the son of Noah.

Ricki Lake is perhaps as well known for her “Ricki Lake” talk show, as she is for playing Tracy Turnblad in the 1988 movie “Hairspray”.

In gardening terms, a hotbed is an area where decaying matter makes it warmer than its surroundings. The heat is generated by the activity of the organisms responsible for decomposition. The term “hotbed” is used figuratively in describing an environment that incubates some sort of growth or development, as in “a hotbed of activity”.

Alfred Adler was one of the group of medical professionals that founded the psychoanalytic movement. Today, Adler is less famous than his colleague Sigmund Freud.

Robin Thicke is a singer-songwriter from Los Angeles who has a pair of showbiz parents. Robin’s Dad is actor Alan Thicke who made his name on the TV show “Growing Pains”. Robin’s mother is singer and actress Gloria Loring. Loring and her husband composed the theme songs for the TV shows “Diff’rent Strokes” and “The Facts of Life”.

Daryl Hall & John Oates are a pop music duo who were most successful in the late seventies and early eighties. They had six number one hits, including the 1982 release “Maneater”.

A cruet is a small glass bottle that holds a condiment or perhaps a dressing. The word “cruet” comes from the Old French word for an earthen pot.

The lovely Deborah Kerr was a Scottish actress who made a real name for herself on the American stage and in Hollywood movies. Despite all her success, and six nominations for a Best Actress Oscar, Kerr never actually won an Academy Award. In 1967 she appeared in the James Bond film “Casino Royale” at the age of 46, making her oldest Bond Girl of all time.

Tris Prior is the protagonist in the “Divergent” series of movies, and is played by actress Shailene Woodley.

60. Color of most pomegranate seeds : RED

The name of the fruit called a “pomegranate” comes from the Latin “pomum” meaning “apple” and “granatum” meaning “seeded”.