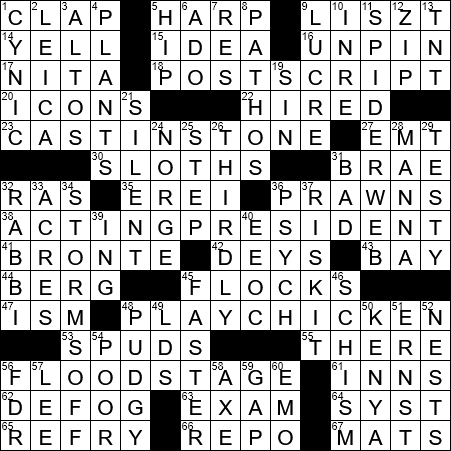 Each of today’s themed answers is a common phrase that has been clued “punnily” with reference to the theater:

“Hungarian Rhapsodies” is a suite of piano pieces by Franz Liszt that are based Hungarian folk music. Liszt himself was a virtuoso pianist, and many these 19 pieces are noted for being difficult to play on the piano.

Byzantium was a Greek colony that was centered on what was to become Constantinople, and is now Istanbul. Legend suggests that there was a king Byzas, who gave his name to the city and later the Byzantine Empire. The Eastern Roman Empire later became known as the Byzantine Empire, right up until the Middle Ages.

The Brontë family lived in the lovely village of Haworth in Yorkshire, England. The three daughters all became recognised authors. The first to achieve success was Charlotte Brontë when she published “Jane Eyre”. Then came Emily with “Wuthering Heights” and Anne with “The Tenant of Wildfell Hall”.

“Dey” was a title used in North Africa, for rulers in Algiers, Tunis and Tripoli.

An iceberg is a large piece of freshwater ice that is floating freely after having broken off from a glacier or ice shelf. Out use of “iceberg” comes from the Dutch word for the same phenomenon “ijsberg”, which translates literally as “ice mountain”.

55. Consolation beginning and ending : THERE

There, there … it’s not worth crying over a crossword.

56. Theater backdrop for a biography of Noah? : FLOOD STAGE

Photosynthesis is the process used by plants (mainly) in which light energy is harnessed to convert carbon dioxide and water into carbohydrate molecules. Fortunately for those of us who enjoy breathing, oxygen is released as a waste product of photosynthesis.

Our word “lucre” meaning “money, profits” comes from the Latin “lucrum” that means the same thing.

The last letter in the word “column” is a silent letter N.

“Norge” is Norwegian for “Norway”, and “Sverige” is Swedish for “Sweden”.

28. Food for the wandering Israelites : MANNA

According to the Book of Exodus, manna was a food eaten by the Israelites as they traveled out of Egypt. The manna “fell” to Earth during the night, six days a week, and was gathered in the morning before it had time to melt.

Somebody described as testy is touchy, irritably impatient. The term comes into English from Old French, ultimately deriving from “testu” meaning “stubborn, headstrong”, literally “heady”. So, our word “testy” comes from the same root as the French word “tête” meaning “head”.

Max Ernst was a painter and sculptor, and a pioneer in the Dada movement and Surrealism. Ernst was born near Cologne in Germany in 1891 and he was called up to fight in WWI, as were most young German men at that time. In his autobiography he writes “Max Ernst died the 1st of August, 1914” a statement about his experiences in the war. In reality, Ernst died in 1976 having lived to the ripe old age of 85.

Peggy Lee was a jazz and popular music singer from Jamestown, North Dakota. “Peggy Lee” was a stage name, as she was born Norma Egstrom. She was a successful songwriter as well as singer, and supplied several numbers for the Disney movie “Lady and the Tramp”. Lee also sang in the film and voiced four of the characters.