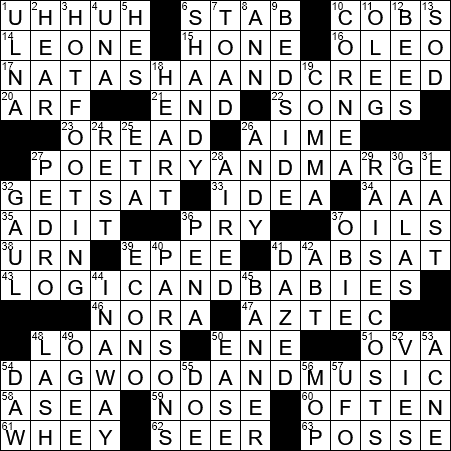 Take a whack, take a stab, take a guess.

Spaghetti Westerns are cowboy movies that were produced and directed by Italians in the 1960s. Pioneer in the field was filmmaker Sergio Leone. Leone directed the best-known and most successful movies in the genre: “A Fistful of Dollars” (1964), “For a Few Dollars More” (1965) and “The Good, the Bad and the Ugly” (1966), all of which star Clint Eastwood.

In the “Rocky” series of films, Rocky Balboa was given the ring name “The Italian Stallion”. Rocky’s first real opponent was Apollo Creed, known in the ring as “The Master of Disaster” and “The Count of Monte Fisto”.

The Oreads were the mountain nymphs that accompanied the goddess Artemis on her hunting expeditions. Each Oread dwelled on a different mountain, for example:

An adit is specific type of mine access, a horizontal shaft that extends into the mine. This can be compared with the more traditional vertical shaft that is used for access into most mines. Adits make sense when the ore is located inside a mountain or hill, as opposed to “underground”, as they allow the mine entrances to be on the valley floor.

Leonard Nimoy played the logical Mr. Spock in the original “Star Trek” television series. Spock has to be the most popular character on the show, and he keeps popping up in “Star Trek” spin offs to this day. Nimoy first worked alongside William Shatner (Captain Kirk) in an episode of “The Man from U.N.C.L.E.” (I loved that show!), with Nimoy playing a bad guy and Shatner playing an U.N.C.L.E. recruit.

“Heartburn” is a 1983 novel by Nora Ephron that is a fictionalized account of her own marriage to and divorce from investigative journalist Carl Bernstein of Watergate fame. “Heartburn” was adapted into a movie of the same name in 1986, with Meryl Streep and Jack Nicholson playing the lead roles.

The Aztecs are the athletic teams of San Diego State university. The team mascot is the Aztec Warrior.

“Blondie” was created as a comic strip by Chic Young. It was first published in 1930, and is still being created today (although the strip is now controlled by Chic’s son, Dean). The strip spawned a series of radio programs (1939-1950) and a series of Blondie films (1938-1950). Blondie is married to Dagwood Bumstead. Dagwood slaves away at a construction company run by Julius Dithers, whose wife is called Cora. Another famous character in the strip is Elmo Tuttle, a pesky neighborhood kid who is always bugging Dagwood.

Singer Debbie Harry and guitarist Chris Stein founded the rock band Blondie in 1974. Blondie’s biggest hits were “Heart of Glass”, “Call Me”, “Rapture” and “The Tide is High”.

1. It parallels the radius : ULNA

Laurence Sterne is best known for his novel “The Life and Opinions of Tristram Shandy, Gentleman”. It is an epic work, that was published in nine volumes over ten years.

Ann Radcliffe was an English author famous for her Gothic novels. Radcliffe is credited with pioneering the genre of Gothic fiction, and influenced later writers such as the Marquis de Sade, Edgar Allen Poe and Sir Walter Scott.

We tend to appreciate a good bedside manner in medical professionals.

The cornea is the transparent part of the eye in the front, covering the iris and the pupil. Even though the cornea is not part of the lens it acts as a lens, and in fact does most of the work focusing light coming in through the eye. The cornea is in effect a fixed-focus lens passing on light to the variable-focus lens that is inside the eye.

That would be bridge, the card game.

“See Saw Margery Daw” is a nursery rhyme that goes:

See Saw Margery Daw,
Jacky shall have a new master;
Jacky shall earn but a penny a day,
Because he can’t work any faster.