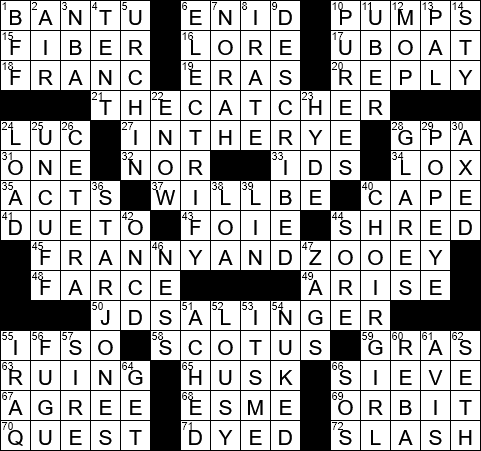 The French franc was made up of 100 centimes, before being replaced by the Euro.

“The Catcher in the Rye” is the most famous novel from the pen of J. D. Salinger. The main character and narrator in the book is Holden Caulfield, a teenager who gets expelled from a university prep school. Caulfield also makes appearances in several short stories written by Salinger, as do other members of the Caulfield family. The title “The Catcher in the Rye” is a reference to the 1782 poem “Comin’ Thro” the Rye” by Scottish poet Robert Burns.

There is no official creed or motto for the US Postal Service. However, there is the oft-quoted inscription that is posted (pun!) over the entrance to the James Farley Post Office in New York City:

Lox is brine-cured salmon fillet that is finely sliced. The term “lox” comes into English via Yiddish, and derives from the German word for salmon, namely “Lachs”.

37. Words repeated after “Whatever” in a Doris Day song : WILL BE

As Doris Day told us, “que será, será” is Spanish for “whatever will be, will be”. Actually, the phrase is “pseudo-Spanish”, and isn’t grammatically correct.

Pâté is a rich spreadable paste made up of a mixture of ground meat and fat, to which various vegetables, herbs and spices may be added. The most famous version of the paste is pâté de foie gras, which is made from the fattened livers of geese (“foie gras” means “fat liver” in French).

A “farce” is a comedy play that features an exaggerated and improbable storyline, with lots of physical humor. I love a good farce …

The musical “La Cage aux Folles” opened on Broadway in 1985. It is an adaptation of the French play of the same name by Jean Poiret that was first staged in 1973. I’ve never had the pleasure of seeing the stage play nor the musical, but I love the wonderful movie adaptation called “The Birdcage”, which was released in 1996. The film has a very strong cast that includes Robin Williams, Nathan Lane, Gene Hackman and Hank Azaria.

American author J. D. Salinger is best known for his 1951 novel “Catcher in the Rye”. Salinger garnered a lot of public attention with the success of his masterpiece, and his response was to become somewhat of a recluse. His obsession with privacy led to several court cases, and in one case he successfully stopped the publication of an unauthorized biography by Random House.

“Nine Stories” is a collection of short stories by J. D. Salinger that was first published in 1953. The two most famous stories in the collection are probably “A Perfect Day for Bananafish” and “For Esmé—with Love and Squalor”.

The punctuation mark “/” has been around for a long time, and has been known by several names including “oblique”, “stroke” and “virgule”. The name “slash” is relatively new, arising in the very early 1960s and gaining popularity with the proliferation of computers.

The Cavaliers are the professional basketball team based in Cleveland, Ohio. The Cavs joined the NBA as an expansion team in 1970.

Sea urchins are globular, spiny creatures found just about everywhere in the ocean. The “roe” of a sea urchin is eaten as a delicacy in several cuisines around the world. In a sushi restaurant, the sea urchin roe is called “uni”. The term “roe” normally means “fish eggs”, but in the case of the sea urchin it refers to the gonads of both the male and female.

Norah O’Donnell is a native of Washington, D.C. and served as Chief White House correspondent for MSNBC from 2005 until 2011, and for CBS News from 2011 until 2012. She became co-anchor for “CBS This Morning” in 2017. Along with her husband, restaurateur Geoff Tracy, O’Donnell published what sounds like an interesting cookbook in 2010, namely “Baby Love: Healthy, Easy, Delicious Meals for Your Baby and Toddler”.

A hatchet is short-handled axe. The name of the axe comes from the Old French “hachete” meaning “small combat-axe”, with “hachete” being the diminutive of “hache” meaning “axe”.

Star Jones is a lawyer and television journalist who spent almost a decade as co-host of the talk show “The View”.

Lin-Manuel Miranda is composer and playwright from New York City, and the creator and star of the hit Broadway musicals “Hamilton” and “In the Heights”. Miranda also co-wrote the songs for the 2016 Disney animated feature “Moana”. He started composing early, and wrote jingles as a child. One of those jingles was later used by Eliot Spitzer in his 2006 gubernatorial campaign.