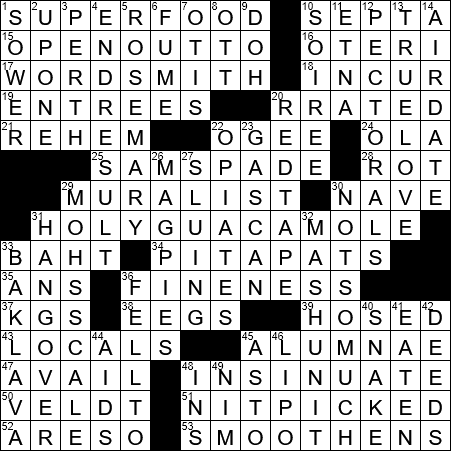 We hear the word “superfood” a lot these days. I think it’s important that we realize that our friends in marketing coined the term to promote foods that have supposed health benefits, even though there’s no obligation to prove those health benefits exist. Since 2007, the European Union (EU) has banned the use of the term “superfood” in marketing of foodstuffs unless there is credible scientific research to back up any health claim. Good for the EU …

20 Not for youngsters : R-RATED

Payola is the illegal practice of paying radio stations or disk jockeys to repeatedly play a particular piece of music. The impetus behind the crime is that the more often a song is played, the more likely it is to sell. The term “payola” comes from the words “pay” and “Victrola”, an RCA brand name for an early phonograph.

Dry rot is a fungal infection that causes wood to decay as the fungus digest those parts of the wood giving it strength and structure. Despite the name, dry rot does indeed require the presence of some moisture to thrive. Wet rot is a similar condition, but one requiring a higher moisture content.

29 LeRoy Foster, for one : MURALIST

A mural is a painting that is applied directly to a wall or a ceiling. The term “mural” comes from the Latin “murus” meaning “wall”.

LeRoy Foster was an artist from Detroit who was most famous perhaps from painting large murals on institutions around the city. Foster earned himself the nickname “Detroit’s Own Michelangelo”.

Radcliffe College was a liberal arts college for women that is located in Cambridge, Massachusetts. Radcliffe was founded in 1879 as the Harvard Annex, a facility for the instruction of female students by faculty members of the all-male Harvard College. Radcliffe fully merged with Harvard in 1999. The list of Radcliffe alumnae is very illustrious, and includes Margaret Atwood, Stockard Channing, Rona Jaffe, Helen Keller, Caroline Kennedy, Empress Masako of Japan, Soledad O’Brien, Bonnie Raitt and Gertrude Stein.

The eland (plural “eland, elands”) is a large African antelope, in fact the largest antelope on the continent. Both male and female eland have horns, and those horns have a steady spiral ridge along their length.

Western Australia is the largest of the nation’s six states. It is also the second-largest of any of the world’s subnational governing bodies, second only to Russia’s Sakha Republic. Western Alaska is over 50% larger than the state of Alaska, and almost 4 times the size of Texas.

The herb known as rosemary is reputed to improve the memory. As such, rosemary has been used as a symbol of remembrance, especially in Europe and Australia. For example, mourners might throw sprigs of rosemary into graves, symbolically remembering the dead. The character Ophelia in William Shakespeare’s “Hamlet” utters the line “There’s rosemary, that’s for remembrance”. The name of the herb comes from the Latin “ros marinus” which means “dew of the sea”. The idea is that rosemary can in fact grow in some arid locations with only the moisture that is carried by a sea breeze.

The Metropolitan City of Catania (“Province of Catania” prior to 2015) is not only home ot the city of Catania, but also to Mount Etna, Europe’s largest volcano.

Gene Pitney had some success as a singer, mainly in the 1960s, with songs such as “Town without Pity”, “(The Man Who Shot) Liberty Valance” and “Twenty-Four Hours from Tulsa”. Songs written by Pitney and recorded by other artists had perhaps even more success. Pitney wrote “Rubber Ball” for Bobby Vee, “He’s a Rebel” for the Crystals and “Hello Mary Lou” for Ricky Nelson.

14 Specification for a pilot : AIR DATE

That would the pilot episode of a TV series.

Opiates are the narcotic alkaloids found in the opium poppy plant, although some synthetic versions and derivatives of the same alkaloids are also called opiates. To produce opiates, the latex sap of the opium poppy is collected and processed. The naturally-occurring drugs morphine and codeine can both be extracted from the sap. Some synthesis is required to make derivative drugs like heroin and oxycodone.

Heckle and Jeckle are two animated magpies that star in a series of Terrytoons cartoon shorts that were made from 1946 right up to 1981.

The Mohs scale of mineral hardness was developed in 1812 by Friedrich Mohs. Basically Mohs took minerals and scratched them with other minerals. In this way he was able to determine which minerals were hardest (most scratch resistant) and which softest. On the scale, diamond is hardest (and rated 10), while talc is softest (and rated 1).

The main cause of hangover symptoms seems to be dehydration. Ethanol causes increased urine production, leaving the body short of water and resulting in headaches, dry mouth and a lack of energy. The symptoms can be alleviated by drinking a lot of water.

Nim is a simple mathematical game of strategy, and an ancient entertainment. Nim involves removing items from distinct piles (say matchsticks). Each player must remove at least one item per turn, and the last person to remove an item is the loser.