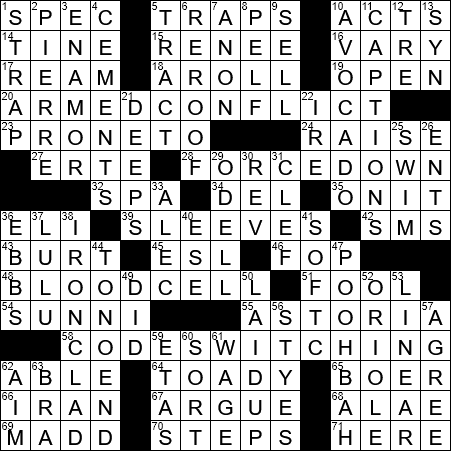 Themed answers each include the letters “CODE”, but the order of those letters has been SWITCHED:

10 Bible book that chronicles the conversion of Paul : ACTS

According to the New Testament of the Christian Bible, Paul the Apostle was not one of the original Twelve Apostles, but an important teacher of the gospel after the death of Jesus. Paul was a Roman citizen who persecuted early followers of Jesus until he had a vision while traveling “The Road to Damascus” that led to his conversion to Christianity.

Renée Fleming is a marvelous soprano from Indiana, Pennsylvania. Famous for her appearances in opera houses and concert halls all over the world, Fleming is also noted for her willingness to bring her craft to the masses. She was a guest on “Sesame Street” singing “counting lyrics” to an aria from “Rigoletto”, and she has appeared a few times on Garrison Keillor’s “A Prairie Home Companion”.

Art Deco is a style of design and architecture of the 1920s that actually had its roots in Belgium and then spread throughout Europe before arriving in North America. Celebrated examples of Art Deco architecture are the magnificent Chrysler Building in New York City completed in 1930, and the GE Building that sits in the middle of New York City’s Rockefeller Center with the address of “30 Rock”.

Actor Burt Reynolds is famous for playing Bandit in “Smokey and the Bandit” and Lewis Medlock in “Deliverance”, but his critically acclaimed performance was as Jack Horner in the 1997 movie “Boogie Nights”. Off the screen, Reynolds was quite the man around town, and was romantically linked to the likes of Tammy Wynette, Lucie Arnaz (daughter of Lucille Ball), Sally Field, Dinah Shore and Chris Evert. He was married to Judy Carne, as well as Loni Anderson.

“Boogie Nights” was released in 1997, and deals with the pornographic movie business. Burt Reynolds plays a director in the industry. It’s not exactly exalted subject matter, but the movie does have an impressive cast (including Mark Wahlberg, Julianne Moore, William H. Macy and Philip Seymour Hoffman).

A fashion plate is a fashionable person, someone who dresses in the latest fashions. The term “fashion plate” originally applied to illustrations (plates) that were used to disseminate fashionable styles in the 1800s and early 1900s.

Red blood cells are the most numerous of all blood cells, and are responsible for delivering oxygen to the body’s tissues from the lungs. They are also known as erythrocytes, with “erythros” being the Greek for “red”.

White blood cells protect the body against infection and are part of the immune system. They are formed in the bone marrow and are found mainly in the blood and lymphatic systems. White blood cells are also known as leukocytes, from the Greek “leuko-” meaning “white”.

55 Oregon city near the mouth of the Columbia : ASTORIA

The linguistic term “code-switching” refers to the practice of a speaker switching between languages while in the same conversation.

“Pelf” is money that has been gained by illegal means. The exact origin of the term is unclear, but it is probably related to the verb “to pilfer”.

The palatine tonsils are located at the back of the human throat. The exact role that tonsils play isn’t completely understood, but it is known that they are in the first line of defense in the body’s immune system. They provide some level of protection against pathogens that are ingested and inhaled.

We call a remarkable thing or a person a lulu. The term “lulu” was coined in honor of Lulu Hurst, the Georgia Wonder, who was a stage magician active in the 1880s.

A humdinger or a pip is someone or something outstanding. “Humdinger” is American slang dating back to the early 1900s, and was originally used to describe a particularly attractive woman.

The starting letter in the word “civilization” is a soft letter C (cee).

The term “pooh-bah” (also “poobah”), meaning an ostentatious official, comes from the world of opera. Pooh-Bah is a character in the wonderful Gilbert & Sullivan comic opera “The Mikado”. Famously, Pooh-Bah holds many, many offices, including that of “Lord High Everything Else”.

Maidenform is a manufacturer of underwear for women that was founded in 1922. The three co-founders were driven to defy the norms of the day that dictated a flat-chested look for women. They produced items that fit the female body, hence the name “Maidenform”.