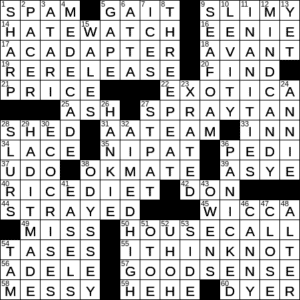 “To hate-watch” a particular TV show is to watch it even though you actually nate its content.

18 Opposite of après : AVANT

In the movie business, final cut privilege usually goes to the producers of a film. Producers are very cognizant of the need for a movie to do well at the box office, and so may disagree with the cut desired by the film’s director. When we view the director’s cut of a particular film, we are often seeing extra scenes and maybe even extra characters. As a result, a director’s cut is usually longer than the final cut.

The most effective fake tans available today are not dyes or stains. Instead, they are sprays with the active ingredient dihydroxyacetone (DHA). DHA reacts chemically with amino acids in the dead layer of skin on the surface of the body. Sounds a little risky to me …

31 Trenton Thunder, for one : AA TEAM

The Trenton Thunder baseball team was founded as the Glens Falls White Sox in Upstate New York in 1980 as a Chicago White Sox affiliate. After a stint in London, Ontario as the London Tigers, the team moved to Trenton in 1994.

First settled in 1679 by Quakers, the city of Trenton is the state capital of New Jersey.. The original settlement was named Trent-towne in 1719 in honor of William Trent, who was one of the biggest landowners in the area. The name “Trent-towne” was later shortened to Trenton. The city was the site of George Washington’s first military victory in the Revolutionary War, in 1776. Because of the Battle of Trenton, New Jersey’s capital is sometimes referred to as the “Turning Point of the Revolution”.

Udo is a perennial plant native to Japan known taxonomically as Aralia cordata. The stems of udo are sometimes boiled up and served in miso soup.

The commonly quoted line “As ye sow, so shall ye reap” is not actually a direct quote from the Bible, although the sentiment is expressed there at least twice. In the Book of Job is the line “They that plow iniquity, and sow wickedness, reap the same”. In the Epistle of Paul to the Galatians is the line “Be not deceived; God is not mocked: for whatsoever a man soweth, that shall he also reap”.

The Spanish and Italian term “don”, and Portuguese “dom”, are honorifics derived from the Latin “dominus” meaning “master of the household”. The contemporary female equivalents are “doña” (Spanish), “donna” (Italian) and “dona” (Portuguese).

Wicca is a relatively new phenomenon. It is a Neopagan religion that developed in the twentieth century. Typically, followers of Wicca worship one goddess and one god, namely the Moon Goddess and the Horned God. A follower of Wicca is called a Wiccan or a Witch.

“Adele” is the stage name of English singer Adele Adkins. Adele’s debut album is “19”, named after the age she was during the album’s production. Her second album was even more successful than the first. Called “21”, the second album was released three years after the first, when Adele was three years older. Her third studio album “25”, released in 2015, broke the first-week sales records in both the UK and the US.

Tottenham is an area in north London in England. It is home to a famous football (soccer) club called Tottenham Hotspur, the team that I used to follow as a kid many moons ago …

The Indiana Pacers are the professional basketball team based in Indianapolis, who play in the NBA. The name was chosen when the team was formed in 1967. “Pacers” is a homage to harness racing pacers (famed in Indiana) and the pace car used in the Indianapolis 500.

The exact origin of the word “hoosier” is unknown, but has been around since at least 1830. The term had no direct linkage with Indiana until John Finley of Richmond, Indiana wrote a poem called “The Hoosier’s Nest” in 1833. A few years later, by 1840, “hoosier” was generally accepted as a term for Indiana residents.

The term “‘Me’ Decade” was applied to the 1970s by novelist Tom Wolfe. His point was that the seventies was an era for the individual which compared starkly with the communal focus of the sixties, the hippie age.

8 Term trademarked by Lakers’ coach Pat Riley, even though the team never achieved one under his leadership : THREE-PEAT

A three-peat is the winning of a sports championship three seasons in a row. The term “three-peat” was coined in 1988 by LA Lakers’ player Byron Scott, and then trademarked by Lakers’ head coach Pat Riley. The Lakers were attempting in 1988 to clinch their third championship title in a row at that time, and eventually lost to the Detroit Pistons. The Lakers had to wait until the 2002 season to claim that three-peat.

Pat Riley is a former professional basketball player and NBA head coach. Off the court, Riley is quite the celebrity and is noted as a snappy dresser. He is a friend of Giorgio Armani and wears Armani suits at all his games. Riley even modeled suits at an Armani fashion show.

9 Spume at the shore : SEA FOAM

Our word “spume” that we use for “froth” comes from the Latin “spuma” meaning “foam”.

Dylan Thomas is perhaps the most famous Welsh poet and writer. His most famous poems are “Do not go gentle into that good night” and “And death shall have no dominion”. He also wrote a famous radio drama called “Under Milk Wood” that was first broadcast in 1954, and that was eventually adapted for the stage and the big screen. My favorite Dylan Thomas work is “A Child’s Christmas in Wales” that was also written originally for the radio, before being published as a work of prose.

“Fritz the Cat” is a comic strip created by Robert Crumb. Fritz is a risqué character, and when he made it to the big screen in 1972 his movie actually earned an X-rating, the first animated feature to be so honored.

Miss Hannigan is a character in the Broadway musical “Annie”. The musical was based on the Harold Gray comic strip “Little Orphan Annie”. There were two subsequent film adaptations, both really quite successful, including one released in 1982 directed by John Huston of all people. It was his only ever musical.

“Odyssey” is one of two epic poems from ancient Greece that is attributed to Homer. “Odyssey” is largely a sequel to Homer’s other epic “Iliad”. “Odyssey” centers on the heroic figure Odysseus, and his adventures on his journey home to Greece following the fall of Troy. We now use the term “odyssey” to describe any long series of adventures.

The adjective “canny” is of Scottish origin, and was formed from the verb “to can” meaning “to know how to”. The idea is that someone who is “knowing” is careful, canny.