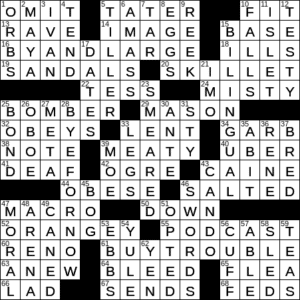 Themed answers each begin with “BYE”, or a BYE-sound:

The B-52 Stratofortress has been a mainstay of the USAF since its introduction in 1955. The stated intention is to keep the B-52 in service until 2045, which would give a remarkable length of service of over 90 years.

In the Christian tradition, it is believed that three days after Jesus was put to death, he rose from the dead. Christians commemorate the crucifixion of Jesus on Good Friday, and celebrate the resurrection of Jesus on Easter Sunday, two days later.

There have been only two actors who have been nominated for an Academy Award in every decade from the 1960s to the 2000s. One is Jack Nicholson, and the other is Michael Caine. Caine is now known as Sir Michael Caine, as he was knighted by Queen Elizabeth II in the year 2000.

A macroinstruction (usually shortened to “macro”) is a set of instructions in a computer program that are abbreviated to one simple command.

The Grand Prince of Moscow, and first Tsar of Russia, Ivan IV became known as “Ivan the Terrible”. The name “terrible” is a translation from Russian, and perhaps creates the wrong impression about the man. The Russian word is “Grozny”, which is more akin to “strict” and “powerful” rather than “cruel” or “abominable”.

For well over a century now, the twin cities of Niagara Falls, New York and Niagara Falls, Ontario have been popular spots for honeymooners. Niagara Falls got a boost as a honeymoon destination in 1953 with the release of “Niagara”, a film noir starring Marilyn Monroe and Joseph Cotton.

Ian Fleming’s spy first introduced himself with the words “Bond, James Bond” in the 1953 novel “Casino Royale”. Sean Connery first uttered the words on the silver screen in the first Bond movie, “Dr. No”.