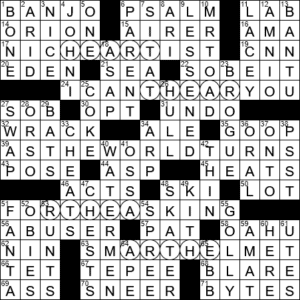 Themed answers each include the letter sequence “EARTH”, but with the order TURNED about:

14 Hunter in the night sky : ORION

According to Greek mythology, Orion was a giant hunter who was placed in the night sky by Zeus, the king of the gods. Orion is very recognizable as a constellation, especially with the three bright stars known as “Orion’s Belt”. The brightest star in the sky, Sirius, is said to be Orion’s hunting dog, and this star sits at Orion’s “foot”.

Jake Tapper is a journalist working for CNN as Chief Washington Correspondent. Tapper is also a cartoonist. He wrote a comic strip called “Capitol Hell” that appeared in the Washington, DC paper “Roll Call” from 1994 to 2003.

Neptune was a Roman god, of both the sea and of freshwater. He was sometimes known as “Neptunus Equester” as he was also the god of horses and patron of horse-racing.

So-called smart motorcycle helmets might feature a heads-up display on the visor. Some might even call emergency services if a crash is detected.

The humerus (plural “humeri”) is the long bone in the upper arm.

3 Naughty’s opposite, to Santa : NICE

Santa checks his list of those who are naughty or nice.

The last pope named John was Pope John XXIII, who held office until his death in 1963. Even though he used the regnal number XXIII, he cannot really be considered the 23rd pope. John XVI was an antipope who made an illegitimate claim to the position from 997 to 998. In addition, there never was a Pope John XX. During the nineteenth century, historians discovered an error in records in which the papacy of John XIV was mistakenly interpreted as the reign of two different popes named John. So, the last Pope John was named the “23rd”, but was actually the “21st”.

10 “The Wind in the Willows” amphibian : MR TOAD

“Cagney & Lacey” is a police drama that originally aired in the 1980s. The title characters are two NYPD detectives with very different lives off the force. Christine Cagney, portrayed for six seasons by Sharon Gless, is a career-focused single woman. Mary Beth Lacy, portrayed by Tyne Daly, is a working mother. As an aside, Sharon Gless ended up marrying one of the show’s producers in 1991.

Amniocentesis (“amnio” for short) is the prenatal test which involves the removal of a small amount of the amniotic fluid surrounding the fetus using a hypodermic needle. The fluid naturally contains some fetal cells, the DNA of which can then be tested to determine the sex of the child and to check for the presence of genetic abnormalities.

It’s possible that the use of the term “brogue”, meaning “Celtic or Irish accent”, is related to the use of “brogue” to mean “stout, heavy shoe”. According to one source, the footwear was “characteristic of the wilder Irish”. I suppose that the accent of the “wilder Irish” came to be known as a “brogue” as a result.

26 Main body of the Constitution? : HULL

“Old Ironsides” is a nickname given to the USS Constitution even though she is actually a wooden-hulled ship. The Constitution was launched in 1797 and can still be seen at sea today. She is the oldest commissioned naval vessel in the world. You can visit Old Ironsides at the Boston Navy Yard, where I had the privilege of touring her in 2011. As an old sailor, I’d say she is the best-maintained ship I’ve ever been on, and paradoxically, she is also the oldest. Really, really beautiful …

The soft drink called “Fanta” has quite an interesting history. As WWII approached, the Coca-Cola plant in Germany had trouble obtaining the ingredients it needed to continue production of the cola beverage, so the plant manager decided to create a new drink from what was available. The new beverage was built around whey (leftover from cheese production) and pomace (left over after juice has been extracted from fruit). The inventor asked his colleagues to use their “imagination” (“Fantasie” in German) and come up with a name for the drink, so they piped up “Fanta!”

“The Village Voice” is a free newspaper distributed in New York City. It had a great advertising slogan in the eighties: “Some people swear by us … other people swear AT us”.

61 Tribe with a state named for it : UTES