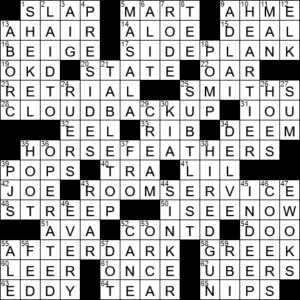 Themed answers each start with a word that is often seen AFTER “DARK”:

A mart is a market, a place to shop. “Mart” is a shortening of “market”.

17 *Core exercise starting from a lateral lying position : SIDE PLANK

The plank is an isometric exercise that strengthens the abdominals, as well as the back and shoulder muscles. There are variations of the plank, such as the side plank and the reverse plank.

A hung jury is a jury that cannot reach a verdict.

The Smiths were an alternative rock band from Manchester in the north of England. Active from 1982 to 1987, the band’s lead singer was the vocalist Morrissey. Morrissey chose the band’s name, and later revealed that “it was the most ordinary name and I thought it was time that the ordinary folk of the world showed their faces”.

“Yabba dabba doo!” is one of Fred Flintstone’s catchphrases.

The stock phrase “Once upon a time …” has been used in various forms as the start of a narrative at least since 1380. The stock phrase at the end of stories such as folktales is often “and they all lived happily ever after”. The earlier version of this ending was “happily until their deaths”.

2 Stopped the ship by facing the wind : LAID TO

A sailing vessel that is “hove to” is pointed into the wind, with the foresail “backed” so that it tries to push the bow away from the wind. At the same time, the mainsail works to push the bow into the wind. The end result is that the vessel remains relatively stationary. Another technique used to stop a sailboat is to “lie to”. A vessel “lying to” is usually pointed about 45-degrees off the wind, with the sails let loose, just flapping.

Adlai Stevenson (AES) ran for president unsuccessfully against Dwight D. Eisenhower (DDE), once in 1952 and again in 1956. Some years after his second defeat, Stevenson served under President Kennedy (JFK) as Ambassador to the United Nations. Stevenson was always noted for his eloquence and he had a famous exchange in a UN Security Council meeting during the Cuban missile crisis. Stevenson bluntly demanded that the Soviet representative on the council tell the world if the USSR was installing nuclear weapons in Cuba. His words were “Don’t wait for the translation, answer ‘yes’ or ‘no’!” followed by “I am prepared to wait for my answer until Hell freezes over!”

Sir Edward Elgar’s “Pomp and Circumstance Marches” is a work that takes its name from a line in William Shakespeare’s “Othello”.

Farewell the neighing steed and the shrill trump,
The spirit-stirring drum, th’ear-piercing fife,
The royal banner, and all quality,
Pride, pomp, and circumstance of glorious war!

The most famous part of the whole work is the trio section of March No. 1, also known as “Land of Hope and Glory”. Here in the US, that trio section is often referred to simply as “Pomp and Circumstance”, or sometimes as “The Graduation March” as it is a staple at school graduations across the country.

Kia’s Sportage is a compact SUV that has been manufactured since 1993.

A pitch called a sinker ball, drops as it leaves the pitcher’s hand and heads for home plate.

The Federal Reserve System is more usually known simply as “the Fed”, and is the central banking system of the US. It was introduced in 1913 in response to a number of financial panics at the beginning of the 20th century. The original role for the Fed was to act as a lender of last resort, in case there was a run on a bank. This can happen as most of the money that is deposited by customers in a bank is reinvested by that bank, so it has very little liquid cash available. If too many customers look for their money at one time, then the bank can be short of cash and this can start a “run”. The Fed’s responsibilities have broadened since those early days …