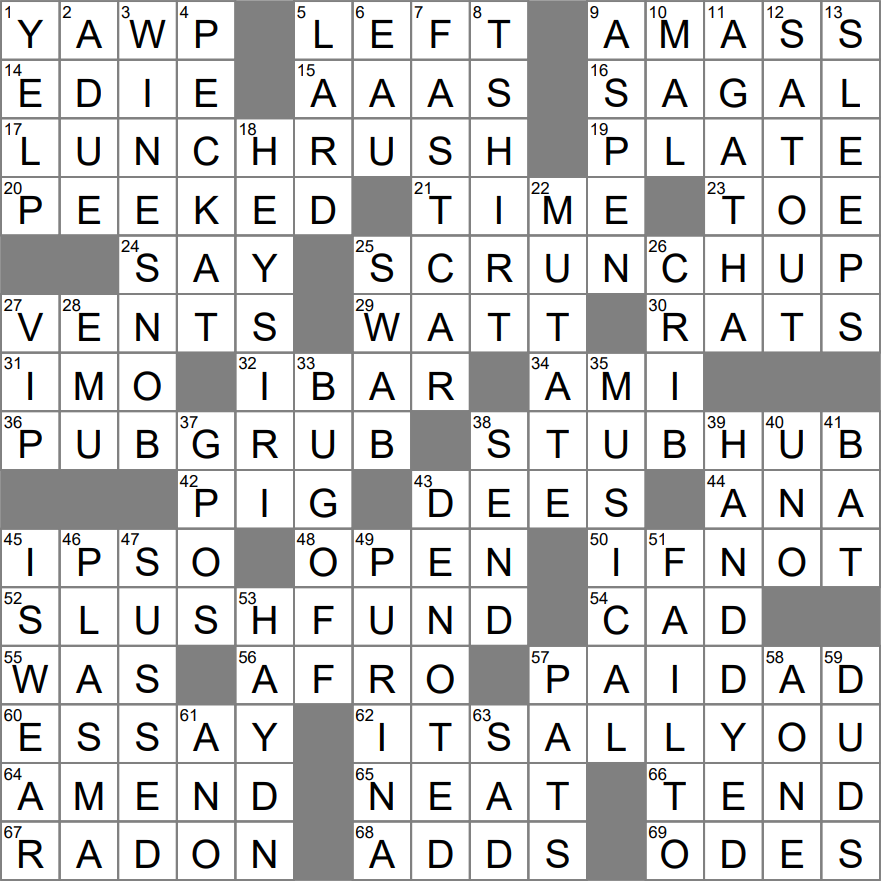 Today’s Reveal Answer: It’s All You

Themed answers each include only letters U as vowels:

“Song of Myself” is a celebrated 1855 poem by Walt Whitman that he continued to work on until 1881. The current title was only adopted in that last 1881 publication. In prior versions it was titled “Poem of Walt Whitman, an American” and simply “Walt Whitman”.

I celebrate myself, and sing myself,
And what I assume you shall assume,
For every atom belonging to me as good belongs to you.

Humorist and writer Peter Sagal is perhaps best known for hosting the excellent NPR radio panel show “Wait Wait… Don’t Tell Me!” He also wrote and starred in a wonderful PBS miniseries “Constitution USA with Peter Sagal”. In the documentary, Sagal travels across the country on a motorcycle, exploring how the US Constitution works, and perhaps how it doesn’t.

Chicago Public Radio produces one of my favorite radio shows, “Wait Wait… Don’t Tell Me!” It is indeed a fun game show, hosted by Peter Sagal. The “Morning Edition” newsreader Carl Kasell used to act as judge and scorekeeper, until he retired in 2014. There should be more game shows of that ilk on the radio, in my humble opinion …

We’ve been using “fiddlesticks” to mean “nonsense” since the early 17th century. Prior to that time, “fiddlestick” just referred to the bow of a fiddle.

In the folk tale “Ali Baba and the Forty Thieves”, the title character is a poor woodcutter who discovers the magic phrase “Open sesame!” that opens the thieves’ den.

A slush fund is a sum of money that is held in reserve or, in the case of illicit dealings, a sum that is used for paying bribes.

7 Tracy Chapman hit with the line “Won’t have to drive too far” : FAST CAR

Singer-songwriter Tracy Chapman began playing the guitar and writing songs at a pretty early age, when she was about eight years old. Her best-known songs are probably “Fast Car” (1988) and “Give Me One Reason” (1995).

Genetic variation is a fundamental behind the process of natural selection. Genetic variation is the result of mutations occurring in genes. If a mutation results in an individual that is more fit for survival, then the principle of “survival of the fittest” makes it more likely that the individual will mate. The mutation can then be passed onto offspring.

A textile is a cloth that has been woven or knitted. The term “textile” comes from the Latin “texere” meaning “to weave”.

American Girl is a line of dolls introduced in 1986. The dolls were originally young girls dressed in clothes that evoked various periods of American history.

The expression “bats in the belfry” meaning “mad, crazy” conjures up images of bats flying around Gothic bell towers, but actually it’s a relatively recent addition to our vernacular. The term is American in origin, and dates back only to the early 1900s. The concept is that someone who is “crazy”, with wild ideas flying around his or her head, can be described as having bats (wild ideas) flying around the belfry (head). The terms “bats” and “batty” originated at the same time, and are clearly derivative.

Plasma (sometimes “plasm”) is the clear, yellow-colored liquid component of blood and lymph in which cells are suspended.

Fancy Feast is a brand of cat food that was introduced by the Carnation Company in 1982.

Purina began business in 1894 as an operation for producing feed for farm animals. A few years later, in 1902, the Ralston name was introduced when Webster Edgerly joined the business. Edgerly was the founder of a controversial social movement called Ralstonism. Central to the movement was personal health, with RALSTON standing for Regime, Activity, Light, Strength, Temperation, Oxygen and Nature. Ralston Purina was acquired by Nestlé in 2001.

53 Composer known as the “Father of the Symphony” : HAYDN

A “pat” of butter is so called because of the tradition of forming it by “patting”.