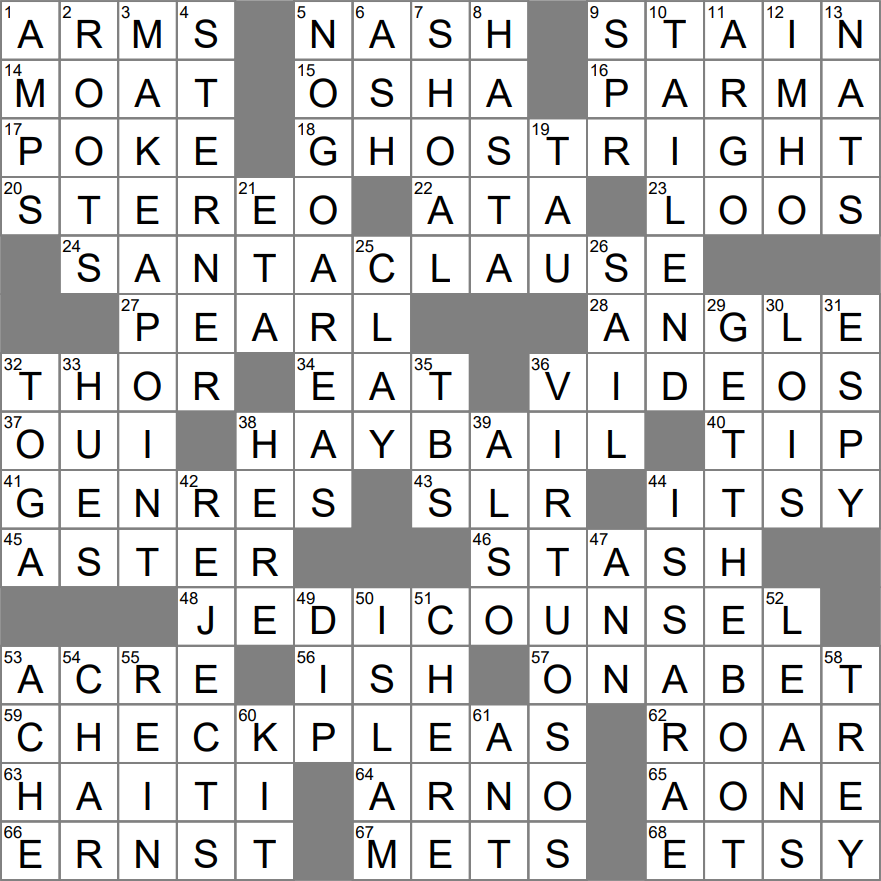 Today’s Theme (according to Bill): Sounds Like Lore to Me

Themed answers sound like common phrases, but are presented in the puzzle with reference to the law:

14 Water under the drawbridge : MOAT

Anita Loos was an American screenwriter and author who was most famous for her novel “Gentlemen Prefer Blondes” that was first published in 1925. “Gentlemen Prefer Blondes” was originally published as a series of short stories in “Harper’s Bazaar”. The heroine of the story was Lorelei Lee, a “flapper” who was less interested in marriage than she was in collecting expensive gifts from her many gentleman admirers. Loos also adapted Colette’s novel “Gigl” for the Broadway stage in 1951.

24 Constitutional section on entering through the chimney? : SANTA CLAUSE (sounds like “Santa Claus”)

32 Avenger with a hammer : THOR

In most states in the US, it is legal for a bail bond agent to post bail for someone facing trial. Bail bond agencies are commercially driven enterprises, and are peculiar to the United States. In the rest of the developed world, posting a defendant’s bond for profit is considered illegal.

The island of Hispaniola in the Caribbean, shared between Haiti and the Dominican Republic, is known in Spanish as “La Española”.

The Ponte Vecchio is the oldest bridge that spans the Arno river in Florence, Italy. The bridge dates back to medieval times, and indeed the name “Ponte Vecchio” translates as “Old Bridge”. Famously, there are two rows of shops built on either side of the roadway crossing the bridge.

The New York Mets (NYM) baseball team was founded in 1962 as a replacement for two teams that the city had lost, namely the Brooklyn Dodgers and the New York Giants. For several years the Mets played very poorly, finishing no better than second-to-last in their division. Then along came the “Miracle Mets” (aka “Amazin’ Mets”) who beat the Baltimore Orioles in 1969 to claim the World Series in a huge upset.

2 Miniseries based on a Haley novel : ROOTS

“Hasta luego” translates literally from Spanish as “until later”, and is used to say “see you later”.

A catamaran is a boat that has two hulls. Catamarans have been around a long time, with the design having been used by the Ancient Greeks. Notably, the design was used by the locals in the Bay of Bengal and it was this design that was adopted by European boat builders. The name “catamaran” comes from the Tamil language of southeastern India, with “kattu maram” meaning “logs tied together”.

“The Misery Index” is an American comedy game show hosted by English presenter Jameela Jamil. The game involves rating and ranking miserable stories that are true.

The dramatic tango dance originated in the late 1800s in the area along the border between Argentina and Uruguay. Dancers and orchestras from Buenos Aires in particular traveled to Europe and beyond in the early twentieth century and brought the tango with them. The tango craze first struck Europe in Paris in the 1910s, and from there spread to London and Berlin, crossing the Atlantic to New York in 1913.

Indonesia is the fourth most populous country in the world, and is the country with the largest population of Muslims. And, Indonesia has an amazing 17,508 islands.

“Cher” is French for “dear”. The spelling is “chère” when used with a feminine noun.

The word “pantry” dates back to 1300, when it came into English from the Old French “panetrie” meaning a “bread room”. Bread is “pain” in French, and “panis” in Latin.