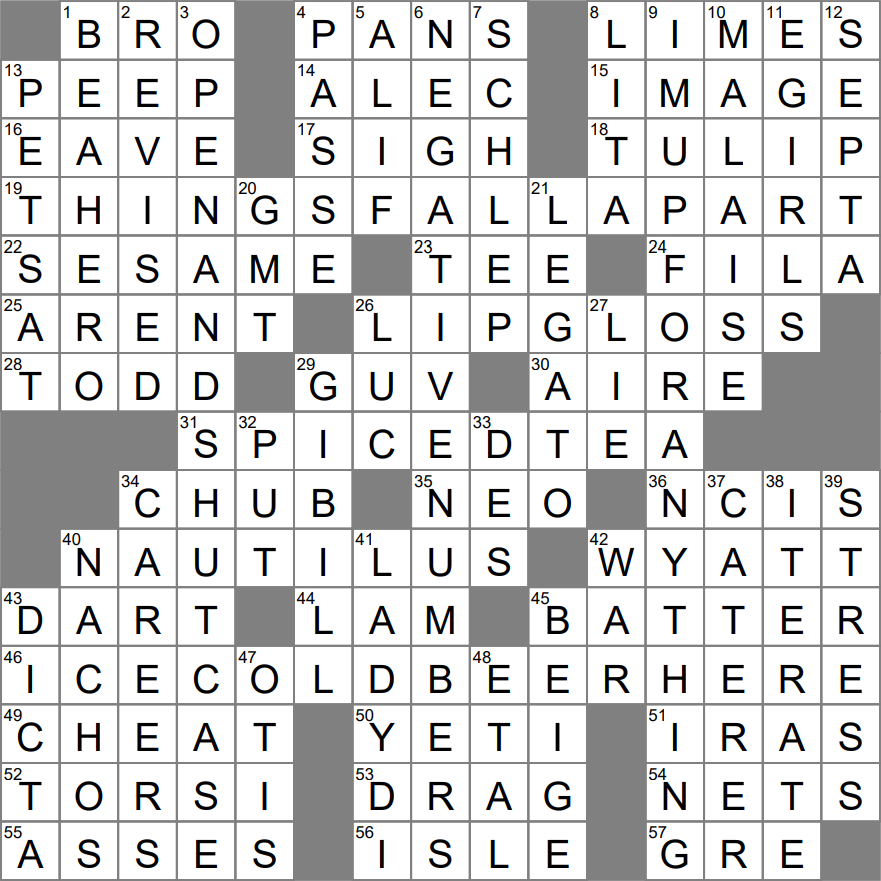 To pan something is to criticize it harshly.

Peeps are marshmallow candies, usually in the shapes of chicks and bunnies, primarily sold around the Easter holiday. Peeps were introduced in 1952 by a Russian immigrant called Sam Born whose company “Just Born” makes the candies to this day. The original candies were yellow and hand-shaped to look like little chicks, hence the name “Peeps”.

Alec Benjamin is a singer-songwriter from Phoenix. Although he writes and performs songs primarily in English, he also records some of those English-language songs in Mandarin Chinese.

The NAACP Image Awards are presented annually to recognise people of color in the worlds of film, television, music and literature. The first awards were presented in 1967, and the ceremony usually takes place in Los Angeles.

Tulip festivals are held in a few cities around the world. The largest of these is the Canadian Tulip Festival that is held every year in the capital city of Ottawa. The tradition of growing tulips in Ottawa really started at the end of WWII. The Dutch royal family presented the city with 100,000 tulip bulbs as an act of thanks for having sheltered Princess Juliana and her children while the Nazis occupied the Netherlands. The first Canadian Tulip Festival took place in 1953.

“Things Fall Apart” is a 1958 novel by Nigerian author Chinua Achebe. It is set in Nigeria and deals with the changes that came with the invasion of Nigeria by Europeans, primarily from Britain. “Things Fall Apart” is regarded today as a seminal work, and is read and studied all over Africa and around the world. It is the most widely read book in the whole of African literature. The title is a quotation from the poem “The Second Coming” by W. B. Yeats.

In the folk tale “Ali Baba and the Forty Thieves”, the title character is a poor woodcutter who discovers the magic phrase “Open sesame!” that opens the thieves’ den.

The letter at the tail end of the word “rat” is a letter T (tee).

Fila was originally an Italian company, founded in 1911 and now based in South Korea. Fila was started in Piedmont by the Fila brothers, primarily to make underwear that they sold to people living in the Italian Alps. The company started to focus on sportswear in the seventies, using tennis-great Bjorn Borg as their major endorser.

26 Cosmetic invented for the movie industry in 1930 : LIP GLOSS

Lip glass is a cosmetic used to give shine to the lips. It was developed in 1930 by beautician Max Factor Sr., who intended it for use by actresses in black-and-white movies. That glossy look was embraced by the general public.

“Sweeney Todd” was originally a 1936 film, later a 1973 play, then a 1979 musical, and then a movie adaptation of the musical in 2007. After Sweeney Todd has killed his victims, his partner in crime Mrs. Lovett helped him dispose of the bodies by taking the flesh and baking it into meat pies that she sold in her pie shop. Ugh!

Masala chai is an Indian drink made with black tea (the “chai) and mixed spices (the “masala”).

36 Procedural that spun off from “JAG” : NCIS

The legal drama “JAG” is named for the highest ranking uniformed lawyer in the US Navy, the Judge Advocate General. Apparently the show was created as a cross between “Top Gun” and “A Few Good Men”.

Wyatt Cenac is a comedian and writer from New York City who was raised in Dallas. Cenac worked for three years as a writer for the TV show “KIng of the Hill” before joining “The Daily Show with Jon Stewart” as writer and correspondent.

43 Feature of a fitted blouse : DART

To be on the lam is to be in flight, to have escaped from prison. “On the lam” is American slang that originated at the end of the 19th century. The word “lam” also means “beat” or “thrash”, as in “lambaste”. So “on the lam” might derive from the phrase “to beat it, scram”.

The study of animals whose existence have not yet been substantiated is called cryptozoology, and a cryptid is a creature or plant that isn’t recognized by the scientific community, but the existence of which has been suggested.

51 Vehicles that may roll over : IRAS

“Torso” (plural “torsi”) is an Italian word meaning “trunk of a statue”, and is a term that we imported into English.

The etymology of the term “drag”, as used in the transvestite world, seems to be unclear. It perhaps relates to the tendency of a transvestite’s skirts to drag along the ground in days of old (although why they just didn’t hitch up their skirts is beyond me!).

8 Ford whose debut album was “Out for Blood” : LITA

Lita Ford was the lead singer for the Runaways. She later became famous for her solo work, although I’ve never heard of her outside of crosswords, I must admit …

A malaise is a general but undefined feeling of discomfort or illness. The term “malaise” ultimately comes from Old French with the prefix “mal-” meaning “bad” and “aise” meaning “ease”.

11 Some zoomers with an emo aesthetic : E-GIRLS

E-girls and e-boys (maybe “e-kids”) may spend a lot of time on social media, especially TikTok, hence the use of the prefix “e-”.

Public transportation in and around Philadelphia is managed by the Southeastern Pennsylvania Transportation Authority (SEPTA).

The Delaware River rises in the Catskill Mountains in New York and empties into Delaware Bay on the Atlantic Ocean. Along the way, it passes through the cities of Trenton and Camden in New York, Philadelphia in Pennsylvania, and Wimington and Dover in Delaware. The river was named for Englishman Thomas West, 3rd Baron De La Warr. He was appointed the first governor of the Virginia colony. In turn, the river gave its name to the Lenape people, and eventually the US state.

What we commonly refer to as the GI Bill is more correctly called the Servicemen’s Readjustment Act of 1944.

Just after Diana, Princess of Wales died in a car accident, then Prime Minister Tony Blair addressed the nation. In so doing, he described her as “the People’s Princess”. That description resonated with many, and is still used today when referring to “Lady Di”.

42 “All the Light We Cannot See” backdrop : WAR