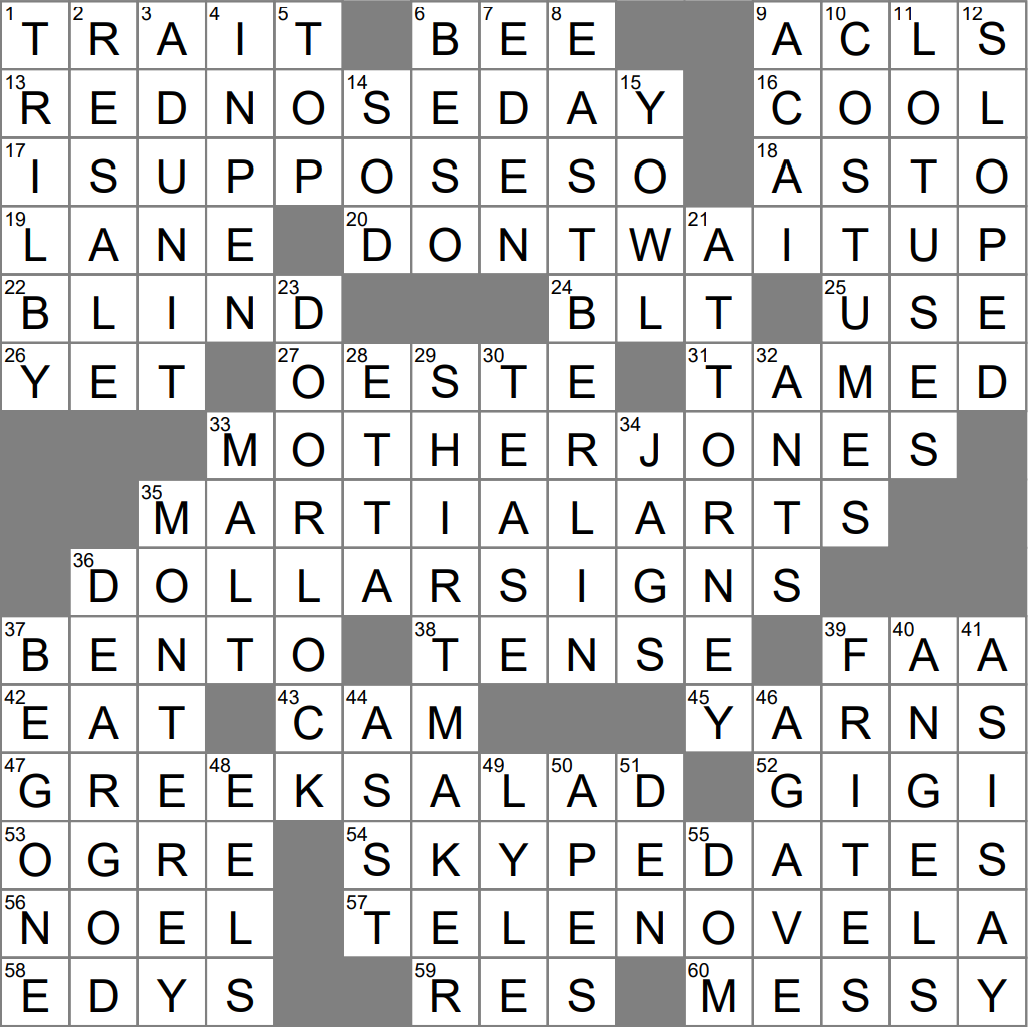 Comic Relief is a British charity launched in 1985 by comedian Lenny Henry and comedy screenwriter Richard Curtis. Central to the organization’s annual program is a telethon known as Red Nose Day. The live event is hosted by celebrity comedians and pop stars and features A-listers making fools of themselves to raise money.

Beep baseball is so called because the ball used beeps, allowing visually impaired people participate in the sport. All players wear a blindfold so that everyone plays with the same level of impairment. In addition to the ball beeping, the bases give off a buzzing sound. Understandably, spectators must remain quiet during each play on the field.

33 Woman who co-founded the Industrial Workers of the World, familiarly : MOTHER JONES

Mary Harris Jones was a labor and community organizer who was so successful at orchestrating strikes of mine workers in the early 1900s that she became known in some circles as “the most dangerous woman in America”. Jones spent her formative years in her native Ireland before emigrating to the US via Canada. She settled in Memphis, Tennessee where her life was struck with tragedy. She lost her husband and all four of their children in an outbreak of yellow fever. Much later in her life she was given the moniker “Mother Jones”.

The Japanese word “dojo” translates literally as “place of the way”. Originally the term applied to training halls that were found in or beside temples. The teaching in a dojo was not limited to the martial arts, but in the Western world we use the dojo as the name for a training facility for judo, karate and the like.

A bento is a single-person meal that is eaten quite commonly in Japan. A bento can be purchased as a take-out meal, or it may be packed at home. A bento is usually sold as a “bento box”.

In English, an imperfect tense is one describing an unfinished or continually repeated action. All continuous tenses are classified as imperfect. Some examples are:

What we know as a Greek salad here in North America evolved from the horiatiki salad from Greek cuisine. The name “horiatiki” translates as “peasant, village salad”. A typical horiatiki salad consists of tomatoes, cucumbers, onion, olives with a slice of feta cheese on top. It also includes a dressing made from Greek oregano and salt in olive oil. Notably, the original dish does not include lettuce.

Gigi Hadid is a model from Los Angeles who started her career as a child model for the brand Baby Guess. Hadid has had an on-again, off-again relationship with British singer Zayn Malik since 2015, and they had a child together in 2020.

The main feature of the Skype application, when introduced, was that it allows voice communication to take place over the Internet (aka VoIP). Skype has other features such as video conferencing and instant messaging, but the application made its name from voice communication. Skype was founded by two Scandinavian entrepreneurs and the software necessary was developed by a team of engineers in Estonia. The development project was originally called “Sky peer-to-peer” so the first commercial name for the application was “Skyper”. This had to be shortened to “Skype” because the skyper.com domain name was already in use.

56 Coward with a knighthood : NOEL

Noël Coward was the most flamboyant of personalities. A playwright, composer and actor, Coward worked in a remarkable range of genres. He wrote the wonderfully airy play “Blithe Spirit”, as well as the Oscar-winning WWII naval drama “In Which We Serve”. A couple of his more famous songs, many of which he performed himself in cabaret, are “Mad Dogs and Englishmen” and “London Pride”.

A telenovela is a “television novel”, a form of programming that is very popular in Latin America. A telenovela is somewhat like a soap opera that has an end in sight, and that runs for less than a year. I like this quote from an executive at Telemundo:

A telenovela is all about a couple who wants to kiss and a scriptwriter who stands in their way for 150 episodes.

1 Hat with a teardrop-shaped crown : TRILBY

A trilby is a soft felt hat with a narrow brim and an indented crown. This style of hat was worn in a London production of a stage adaptation of George du Maurier’s 1894 novel “Trilby”. Soon after, the style became known as “a Trilby hat”, and the name has stuck.

Medtronic is a medical device manufacturer that was founded in Minneapolis in 1949 as a repair shop for medical equipment.

In Spanish, a “beso” (kiss) is an “indicación de afecto” (display of affection).

7 Place with a snake in the grass : EDEN

After World War II, the allies agreed to divide the city of Berlin into four sectors. The sector administered by the Soviets became known as “East Berlin”, and the sectors administered by the Americans, French and British became known as “West Berlin”. The German Democratic Republic (GDR) was established in 1949, and declared its capital as East Berlin. Starting in 1961, the GDR built a wall (the Berlin Wall) around West Berlin, separating that portion of the city from East German territory.

Flavonoids are pigments widely distributed in the plant kingdom. They are the most common chemical that produces yellow and red/blue colors in flowers.

“Etta Is Betta Than Evvah!” is a 1976 studio album released by American singer Etta James.

The Jacksonville Jaguars have been in the NFL since 1995, and play in the American Football Conference (AFC).

The Monterey Jazz Festival takes place annually in Monterey, California. The first festival took place in 1958, with the city giving approval largely due to lobbying by jazz pianist and composer Dave Brubeck.

36 XTC song with the lyrics “Hope you get the letter and / I pray you can make it better down here” : DEAR GOD

XTC were a band from Swindon in the UK whose most famous hits were “Making Plans for Nigel” from 1979, and “Senses Working Overtime” from 1982.

Pulque (also “octli”) is an alcoholic drink made by fermenting the sap of the maguey (Agave americana).

Dom Pérignon is a prestige label of champagne from Moët et Chandon, the French winery. The label’s name honors the Benedictine monk, Dom Pérignon, who helped to improve the quality and production of champagne in the early 18th century. Although Dom Pérignon made major contributions to champagne production, many of the stories in which he figures are just myths. He did not “invent” champagne, nor sparkling wine in general. Nor did he say the famous words, “Come quickly, I am drinking the stars!”. That lovely line first appeared in a print advertisement in the late 1800s!