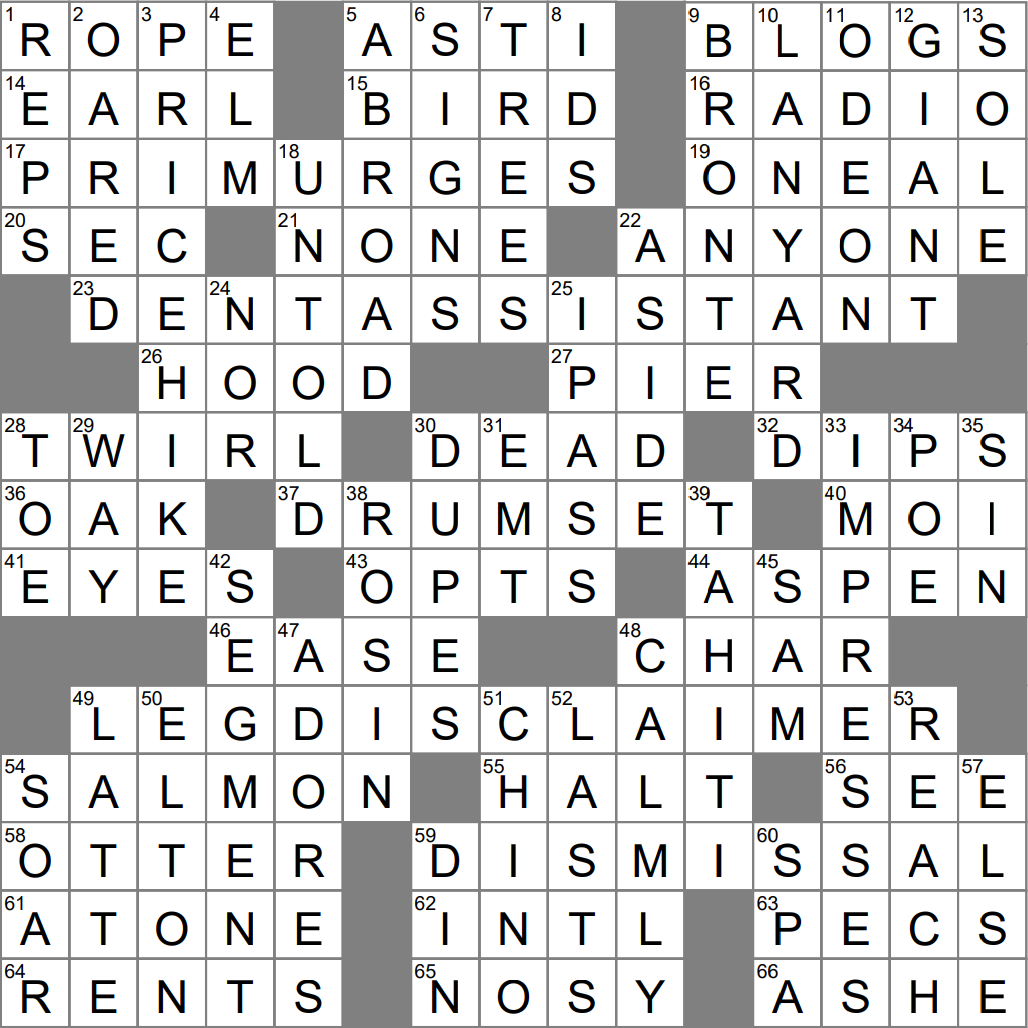 Themed answers are common phrases with the suffix “-AL” DISMISSED from the first word:

Never heard of such a thing …

“Inside the NBA” is a postgame show that airs on TNT. The list of regulars on the show includes ex-players Charles Barkley and Shaquille O’Neal.

Baba ganoush (also “baba ghanouj”) is an Arab dish with the main ingredient of mashed eggplant. It is sometimes served as a (delicious) dip.

We use the spelling “whiskey” for American and Irish versions of the drink, and “whisky” for scotch, the Scottish version.

The International Monetary Fund (IMF) was established at the end of 1945 with 29 major economies supporting and funding an effort to stabilize economies across the globe after WWII. Headquartered in Washington, D.C., today the IMF has 187 member countries.

Arthur Ashe Stadium in Queens, New York opened in 1997, and is the largest outdoor, tennis-only venue in the world. The stadium was often criticized for not having a retractable dome to protect the playing surface from inclement weather. Well, that changed in 2016 when the stadium debuted its new retractable roof, a $150 million investment in the facility.

2 Worked in a galley : OARED

Galleys were large medieval ships found mainly in the Mediterranean. They were propelled by a combination of sails and oars.

Elms are a genus of tree comprising 30-40 different species. Sadly, most elm trees in the world have died in recent decades due to the spread of Dutch elm disease.

In terms of age, Emily Brontë was the middle of the three Brontë sisters, younger than Charlotte and older than Anne. Emily was a poet and a novelist, and is best remembered for her only novel, “Wuthering Heights”. Emily died very young, at 30 years old. She never recovered from a severe cold that she caught at the funeral service of Branwell Brontë, her only brother. The cold developed into tuberculosis, for which she eschewed medical attention. She passed away after three months of illness.

“Wuthering Heights” by Emily Brontë is essentially the story of a love triangle between the main characters: Catherine Earnshaw, Heathcliff and Edgar Linton.

The term “lanyard” describes a rope or line used for securing items aboard a ship. More generally, a lanyard can hold an item like a whistle or knife, and often takes the form of a loop worn around the neck.

“Ode on Melancholy” is one of the so-called “1819 Odes” written by the poet John Keats. The collection includes famous poems such as “Ode on a Grecian Urn”, “Ode to a Nightingale” and “Ode to Psyche”.

Oracle Park has been home to the San Francisco Giants baseball team since 2000, although the “Oracle” moniker has only been in place since 2019. The park sits right on San Francisco Bay, on a cove named China Basin. Since the stadium has been in use, that cove is known unofficially as McCovery Cove, after Giants first baseman Willie McCovey. When a Giants player hits a home run that lands directly in the water of McCovey Cove, it is known as a “splash hit”.

Edgar Allan Poe enlisted in the US Army when he was 18 years old, although he claimed to be 22 at the time and used the false name “Edgar A. Perry”. While serving at Fort Independence in Boston Harbor, Poe released his first book “Tamerlane and Other Poems”, of which there are purported to be only 12 copies left in existence. Poe negotiated his way out of a 5-year obligation to the army by arranging entry to West Point. He managed to cut short his time at West Point by purposely getting court-martialed for gross neglect of duty and disobeying orders. Soon after returning to civilian life, Poe published his third volume of poems, with financing provided by several of his West Point classmates. Simply titled “Poems”, the work includes the line “To the U.S. Corps of Cadets this volume is respectfully dedicated”.

In the Christian and Jewish traditions, the Ten Commandments are a set of principles relating to worship and ethics that the faithful should observe. Also known as the Decalogue, the Book of Exodus describes the revelation of the principles by God to Moses on Mount Sanai. Also according to Exodus, the Ten Commandments were inscribed by the finger of God onto a pair of stone tablets that were kept in a chest known as the Ark of the Covenant.

Rosin is a solid form of resin derived from plant sources. Rosin is formed into cakes that players of stringed instruments use to rub along the hairs of their bows to help improve sound quality. The rosin increases the degree of friction between the strings and the bow. That same friction-increasing property comes into play when baseball pitchers use rosin to get a better grip on the ball, or when dancers apply rosin to the soles of their shoes.

The term “South Sea” was coined in Spanish (“Mar del Sur”) by Spanish conquistador Vasco Núñez de Balboa when describing what we know today as the Pacific Ocean. We tend to use the term “South Seas” in modern times to refer to that part of the Pacific that lies below the equator.

Scottish actor Sam Heughan is best known for playing Jamie Fraser, one of the two lead characters on the fantasy drama “Outlander”. If you like a drop of whisky now and then, you might want to try “The Sassenach”, a brand that Heughan launched in 2020.

In Greek mythology, Pan was a lecherous god who was part-man and part-goat, and one who fell in love with Echo the mountain nymph. Echo refused Pan’s advances so that he became very angry. Pan’s anger created a “panic” (a word derived from the name “Pan”) and a group of shepherds were driven to kill Echo.

“Rocketman” is a very entertaining musical biopic about the life of Elton John. The title role is taken by English actor Taron Egerton, who actually did a great job singing the songs in the film himself. The movie’s title comes from Elton John’s 1972 hit record “Rocket Man”.

Chino is a twill cloth that is most often used to make hard-wearing pants. The pants themselves have come to be referred to as chinos. Chino cloth was originally developed for use by the military, but quickly became popular with civilians.

In the world of boxing, the phrase “tale of the tape” describes the objective comparison of the pre-fight measurements of the contestants. The use of the term “tape” suggests that the focus is on such measurements as length of reach and height. More comprehensively, the tale of the tape includes the boxers’ weights.

“Encanto” is a 2021 animated Disney film. It is about a Colombian family, named the Madrigals, who have magical powers that provide assistance to the people in their community (Encanto).