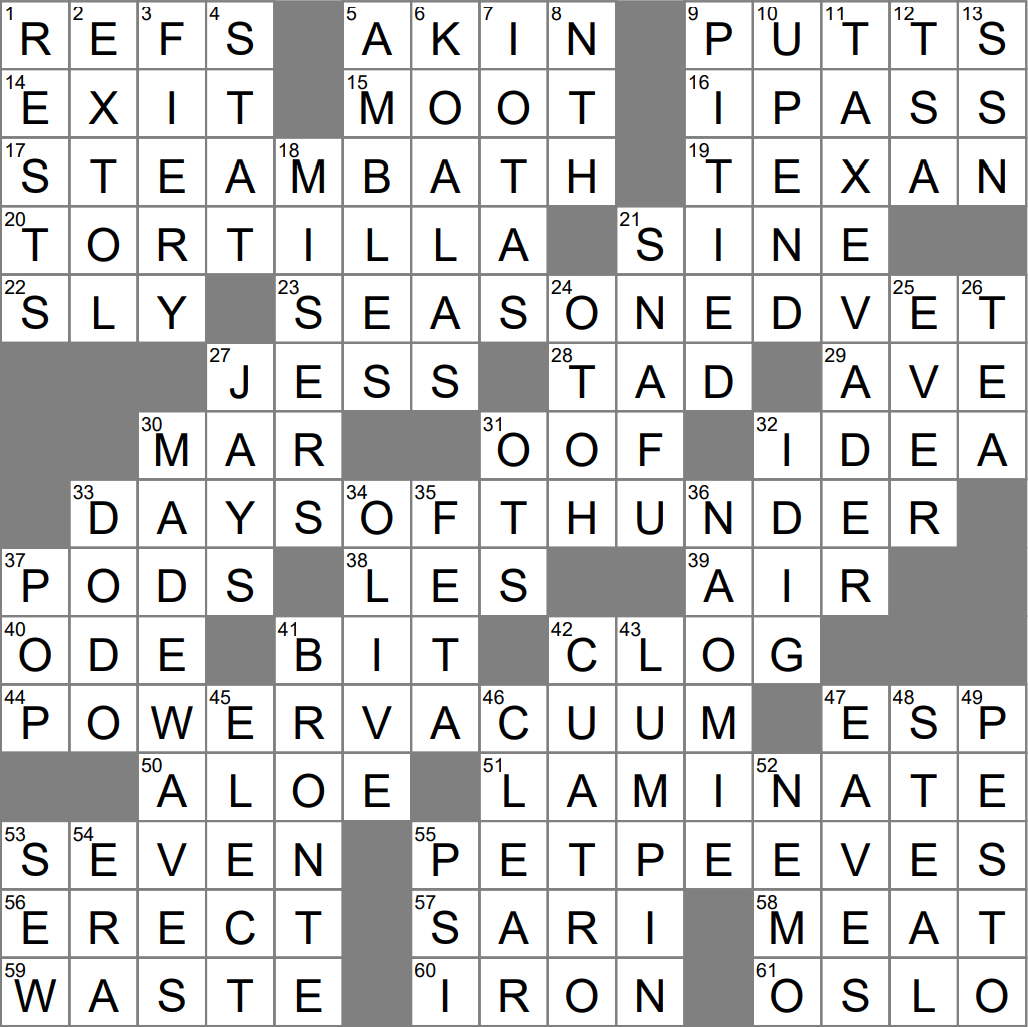 Themed answers each end with something that is often a particular PEEVE of house PETS:

15 Not worth discussing : MOOT

“Enchilada” is the past participle of the Spanish word “enchilar” meaning “to add chili pepper to”. An enchilada is basically a corn tortilla rolled around some filling and then covered in chili pepper sauce. The term “big enchilada” is used in the same way as we would use “big cheese” i.e. the top dog. The phrase was popularized in the sixties when John Ehrlichman refers to Attorney General John Mitchell as “the big enchilada” on one of the Watergate Tapes.

Zooey Deschanel is an actress and singer-songwriter from Los Angeles. She is the younger sister of Emily Deschanel who plays the title role on the TV show “Bones”. Zooey plays Jess Day, the lead character on the sitcom “New Girl”. In the world of music, Zooey teams up with “M” Ward in the duo that goes by the name “She & Him”.

The famous grid layout of Manhattan’s streets and avenues was the result of the Commissioner’s Plan of 1811. The plan only applied to streets above Houston Street as almost all of the development in lower Manhattan had taken place organically, as the original colony of New Amsterdam grew. One notable exception from the 1811 plan was New York’s magnificent Central Park, which was not envisioned until the 1850s.

“Plumbum” is Latin for “lead”, explaining why the symbol of the element in the Periodic Table is “Pb”. It also explains why the original lead weight on the end of a line used to check vertical was called a “plumb line”. And, as pipes were originally made of lead, it also explains why we would call in a “plumber” if one of those pipes were leaking.

55 Irritating behaviors, and what the ends of the answers to the starred clues may be? : PET PEEVES

Oslo is the capital of Norway. The city burns trash to fuel half of its buildings, including all of its schools. The problem faced by the city is that it doesn’t generate enough trash. So, Oslo imports trash from Sweden, England and Ireland, and is now looking to import some American trash too.

Marsupials are mammals that carry their young in a pouch called a marsupium. Better-known marsupials are kangaroos, koalas, wombats and Tasmanian devils. As you can probably tell from this list, most marsupials are native to the Southern Hemisphere.

Tax evasion is illegal, and tax avoidance is legal. Evading taxes involves dishonest tax reporting, whereas avoiding taxes uses the tax laws as written to reduce the amount of tax owed. Both evasion and avoidance might be regarded as noncompliance, because tax avoidance often involves legal manipulation of the system (using “loopholes”) in a manner that subverts the intent of the tax code.

“SNAFU” is an acronym standing for “situation normal: all fouled up” (well, that’s the polite version!). As one might perhaps imagine, the term developed in the US Army, during WWII.

Back in the mid-1800s, “fiasco” was theater slang meaning “failure in performance”. The meaning morphed soon after into any kind of failure or flop. The term evolved from the Italian “far fiasco”, a phrase that had the same meaning in Italian theater, but translated literally as “make a bottle”. It turns out that “fiasco” and “flask” both derive from the Latin “flasco” meaning “bottle”.

The blue jay is a perching bird that is native to eastern North America. They can be extremely aggressive to other birds, often raiding their nests. If a fight breaks out, the blue jay has been known to decapitate its opponent.

What we know as a Greek salad here in North America evolved from the horiatiki salad from Greek cuisine. The name “horiatiki” translates as “peasant, village salad”. A typical horiatiki salad consists of tomatoes, cucumbers, onion, olives with a slice of feta cheese on top. It also includes a dressing made from Greek oregano and salt in olive oil. Notably, the original dish does not include lettuce.

“Moonlight” is a 2016 semi-autobiographical film based on an unpublished play by Tarell Alvin McCraney titled “In Moonlight Black Boys Look Blue”. “Moonlight” won the season’s Best Picture Oscar, thus becoming the first film to do so with an all-black cast, and the first with an LGBT storyline.

The fizzy candy marketed as Pop Rocks was introduced in 1975. The candy is made by exposing a melted sugar syrup to carbon dioxide at high pressure. As the syrup cools, it traps high-pressure bubbles of the gas inside the candy. When the candy dissolves in the mouth, the carbon dioxide is released with a popping sound.

Charlotte Brontë was the eldest of the three Brontë sister authors. Her most famous work is the novel “Jane Eyre”, which she published under the pen name Currer Bell. The pen name veiled her gender, but preserved the initials of her real name. After “Jane Eyre” was published, Brontë started to move in the same circles as other successful novelists of the day, including William Makepeace Thackeray and Elizabeth Gaskell. Just two years after Bronte died in her late thirties, it was Gaskell who published the first biography of Charlotte Brontë.

52 Fish sought by Marlin and Dory in a Pixar film : NEMO