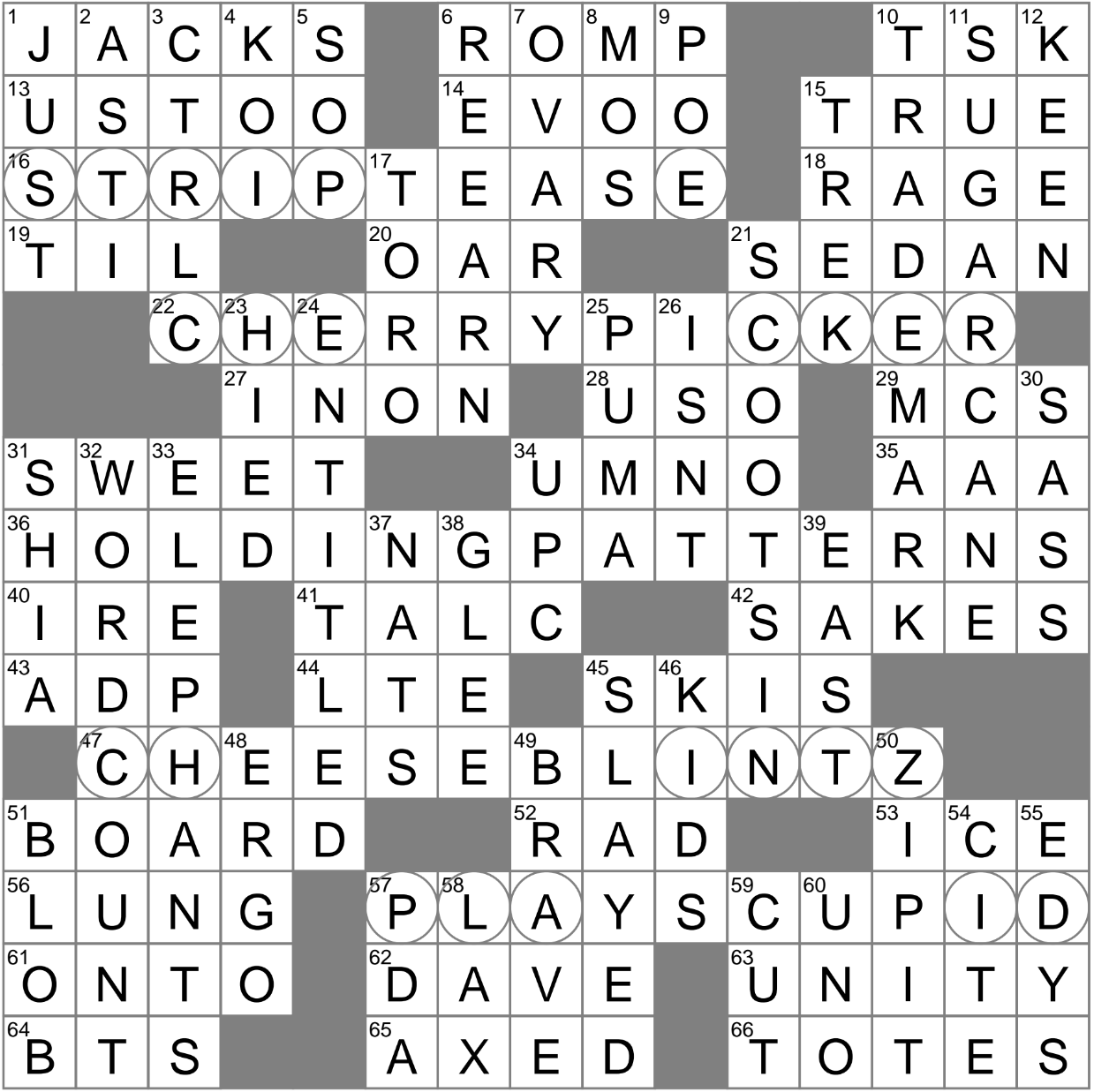 Themed answers are each HOLDING a PATTERN spelled out by the circled letters:

Knucklebones (also “jacks, jackstones”) is a game in which small objects are tossed in the air, while others are picked up, and the tossed objects caught. There are many variations of the game.

Rachael Ray is a celebrity chef and host of several shows on the Food Network television channel. Ray comes from a family that owned and managed a number of restaurants in the northeast of the country. One of Ray’s TV shows is “$40 a Day”, in which she demonstrates how to visit various cities in North America and Europe and eat three meals and a snack on a daily budget of just $40.

The word “burlesque” came into English from French, although the word is rooted in the Italian “burla”, the word for a joke, or mockery. A burlesque is a work of literature, drama or music that is intended to amuse and cause laughter. Burlesques in the US took on a variety show format and were popular in the US from the 1860s. Over time, the variety acts started to include female striptease, and the term “burlesque” has come to be mainly associated with such entertainment. The derivative verb “to burlesque” means “to imitate mockingly”.

The American sedan car is the equivalent of the British and Irish saloon car. By definition, a sedan car has two rows of seating and a separate trunk (boot in Britain and Ireland), although in some models the engine can be at the rear of the car.

A cherry picker is a mobile crane in which the operator stands at the end of the boom. It is also known as a bucket truck, or more formally, an aerial work platform. Believe it or not, cherry pickers were actually invented to make the process of picking cherries more efficient.

36 Flight paths above busy airports, and what the sets of circled letters literally are? : HOLDING PATTERNS

A holding pattern is usually a racetrack, oval pattern that is flown by aircraft while waiting for clearance to land at an airport. Holding patterns are used if an airport gets congested and cannot handle the required number of landings.

Shavuot is a holiday in the Jewish tradition that is also known as the “Feast of Weeks”. The name “Shavuot” translates from Hebrew as “Weeks”).

In the myth of Cupid and Psyche, the two title characters must overcome many obstacles to fulfill their love for each other. Overcome them they do, and the pair marry and enjoy immortal love.

The Dave Matthews Band (sometimes just “DMB”) is a rock band from Charlottesville, Virginia that formed in 1991. DMB hit the headlines for all the wrong reasons in 2004 when their driver decided to dump about 800 pounds of liquid waste from the tour bus into the Chicago River. He pumped the waste through a grate on a bridge, and onto the passengers on a sightseeing boat that was passing below.

“Dynamite” is a 2020 song released by the boy band BTS from South Korea. It was a huge success internationally and hit number-one in the US charts. “Dynamite” was the first song that BTS fully recorded in English.

A hatchet is short-handled axe. The name of the axe comes from the Old French “hachete” meaning “small combat-axe”, with “hachete” being the diminutive of “hache” meaning “axe”.

The Fallopian tubes leading from the ovaries of female mammals in the uterus. The tubes are named for the 16th-century Italian anatomist Gabriello Fallopio, who was the first to describe them.

9 Writer for whom the Edgar Award is named : POE

33 Mammals with tusks and trunks : ELEPHANTS

54 Include in a bibliography : CITE

Back in the 17th century, the term “bibliography” meant “the writing of books”, from the Greek “biblion” meaning “book” and “graphos” meaning “written”. The contemporary usage, describing a list of books related to a particular subject, emerged in the early 19th century.

Sherbet, the frozen dessert, is very similar to sorbet, the difference being that sherbet contains a small amount of milkfat.

UNO is a card game that was developed in the early seventies and that has been sold by Mattel since 1992. It falls into the shedding family of card games, meaning that the goal is to get rid of all your cards while preventing opponents from doing the same.