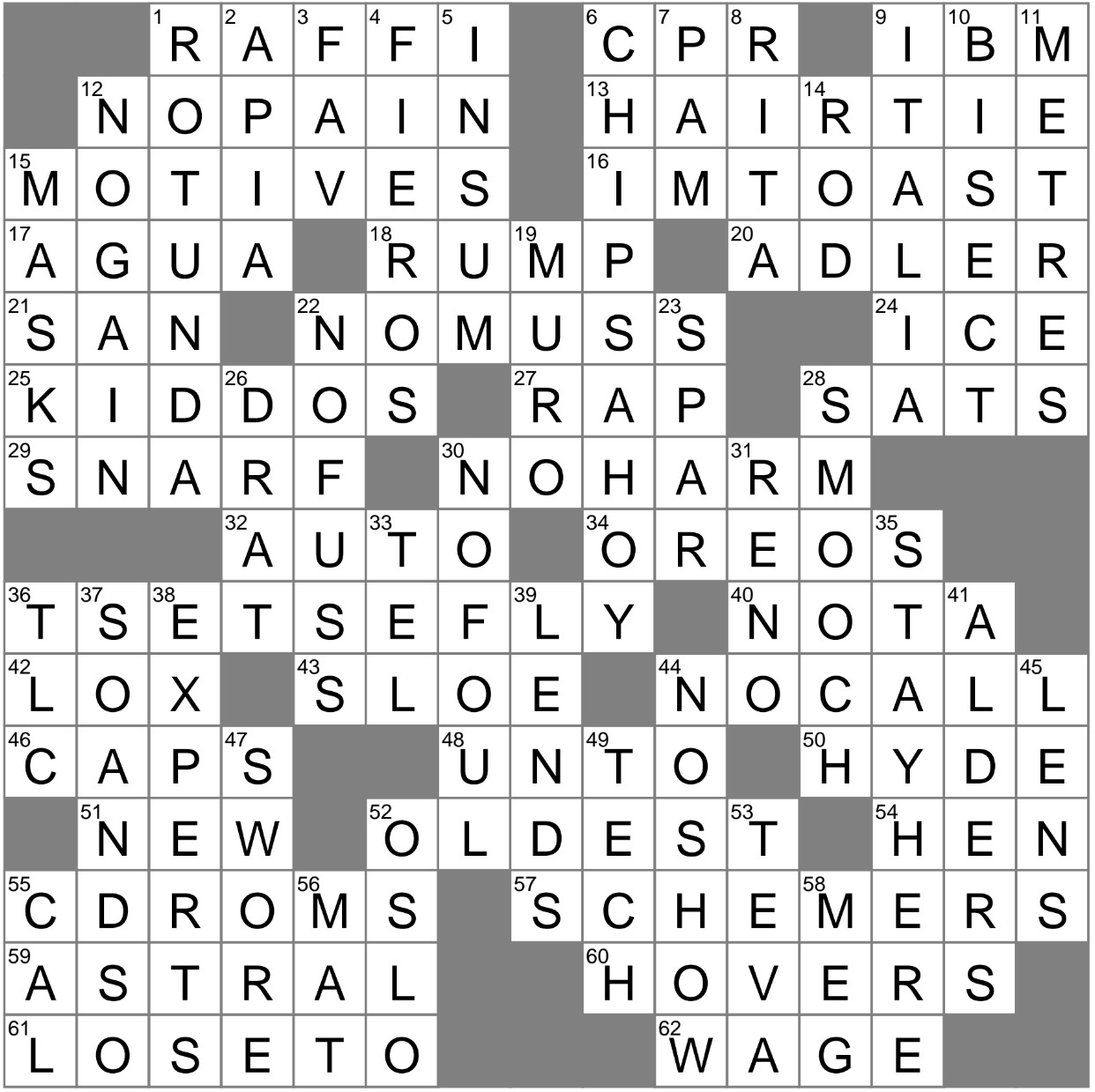 Today’s Theme (according to Bill): That’s a No-No

Themed answers are repetitious idioms, featuring the word “NO” twice:

“Raffi” is the stage name used by Canadian singer and author Raffi Cavoukian. He is best known for his music written for children.

IBM introduced the ThinkPad notebook in 1992 and the brand is still sold today, although no longer manufactured by IBM. IBM sold off its personal computer division in 2005 to Lenovo. A ThinkPad was used aboard the Space Shuttle Endeavor in 1993 on a mission focused on repairing the Hubble Telescope. The ThinkPad was being tested to see how it performed in space, given the high levels of radiation found in that environment. Now, there are about 100 (!) ThinkPads on board the International Space Station.

Debra Messing is most famous for playing Grace Adler on the television series “Will & Grace”.

The famous San Andreas Fault in California lies along the boundary between the Pacific and North American tectonic plates. The faultline was named in 1885 after a small lake just south of San Francisco called Laguna de San Andreas.

“Lizzo” is the stage name of rap singer Melissa Jefferson. She is quite the flutist, having studied classical music and the flute at the University of Houston.

An aphorism is a short and pithy statement that embodies a general truth or insightful observation. Some great examples are:

A McFlurry is an ice cream dessert served in McDonald’s restaurants. A McFlurry is made from soft-serve ice cream, to which are added crushed candy bars or cookies. Cleverly, a McFlurry is mixed on a machine with the mixing blade then doubling as a spoon with which one eats it.

“Nota bene” is Latin for “note well”, and is abbreviated to “NB”.

Lox is a brine-cured salmon filet that is finely sliced. The term “lox” comes into English via Yiddish, and derives from the German word for salmon, namely “Lachs”.

The word “schmear” comes from the Yiddish word “shmir” meaning “spread”. The phrase “the whole schmear” is a relatively recent one, dating back to around 1969 and coming from the world of business.

I don’t think my kids really know what a floppy disk is. A floppy is made of a thin and flexible magnetic material that can store data, enclosed in a protective case. I’ve used 8-inch floppies in my time, and many 5.25-inch floppy disks. Until fairly recently, I had a desktop that would take 3.5-inch disks, although I think the last 3.5-inch floppy disappeared from the house several years ago …

57 Members of a cabal, maybe : SCHEMERS

A cabal is a small group of plotters acting in secret, perhaps scheming against a government or an individual. The use of “cabal” in this way dates back to the mid-1600s. It is suggested that the term gained some popularity, particularly in a sinister sense, during the reign of Charles II in the 1670s. At that time, it was applied as an acronym standing for “Clifford, Arlington, Buckingham, Ashley, and Lauderdale”, a group of ministers known for their plots and schemes.

An astral projection is an out-of-body experience. It is often associated with incidents of near-death and describes the phenomenon of the astral body leaving the physical body and traveling around the astral plane.

Pam Shriver is a former professional tennis player who was especially respected for her abilities as a doubles player. Most of her success came with playing partner Martina Navratilova. Shriver was married for several years to James Bond actor George Lazenby, with whom she has three children.

“No Scrubs” is a 1999 song by girl group TLC. The title uses the slang term “scrub”, which refers to a person who cannot get his or her life together.

A Fresnel lens is a relatively compact, composite lens developed specifically for use in lighthouses. They are gradually being replaced by more modern lighting systems, but the lenses often stay in place as an exhibit in lighthouses open for visitors. That’s not only because the lenses are interesting, as they are also objects of great beauty (in my humble opinion). They are named for their inventor, French civil engineer and physicist Augustin-Jean Fresnel.

52 Home of the Munch Museum : OSLO

Teva is a brand of sandal marketed as a sport sandal. The first design was the creation of a river guide working the Colorado River in the Grand Canyon. The design was patented in 1987.

“The Princess Diaries” is a series of novels for young adults by Meg Cabot. There have been two Disney adaptations of the books, both starring Anne Hathaway as Mia Thermopolis and Julie Andrews as Queen Clarisse Renaldi.