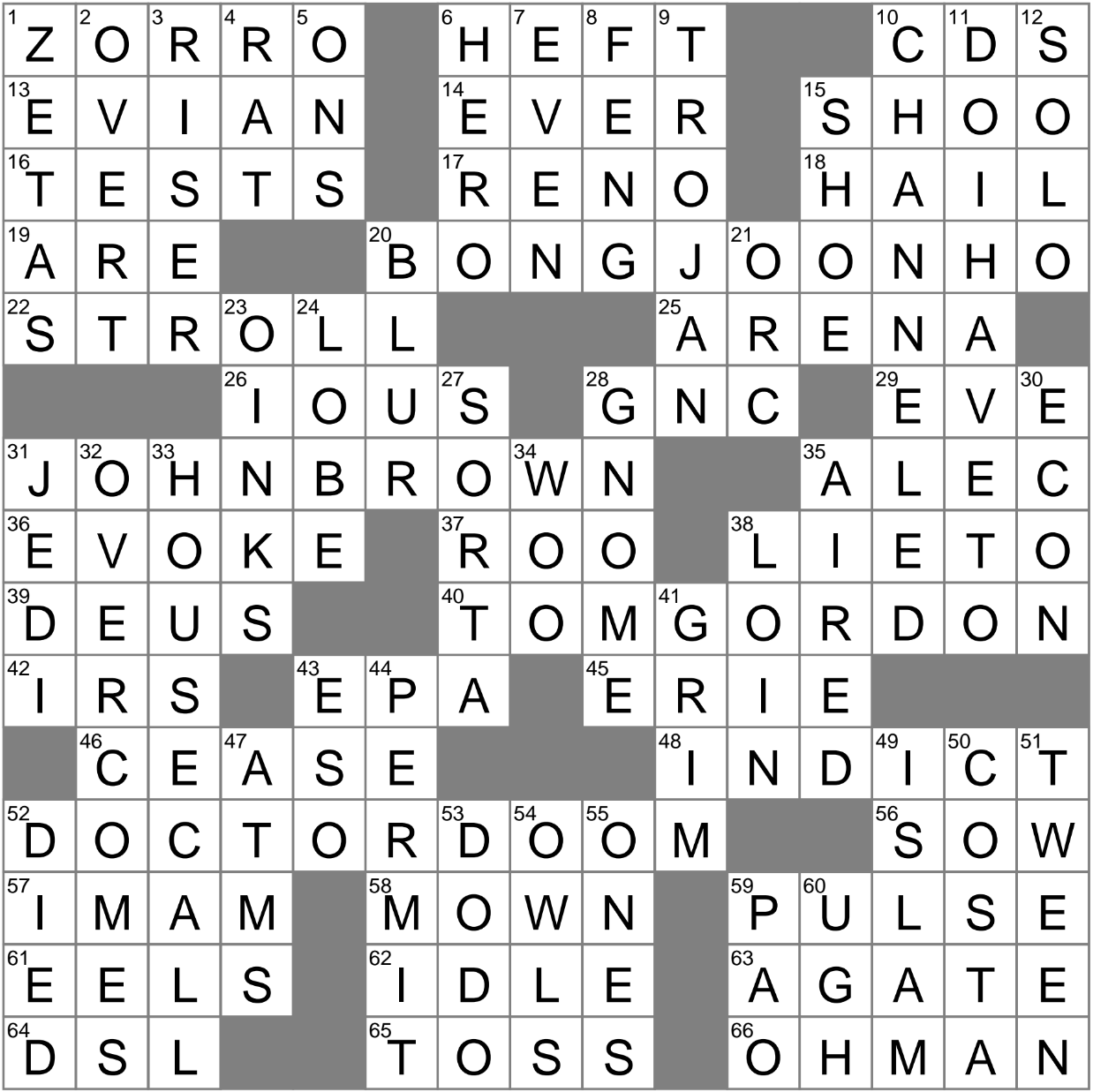 Themed answers are names of MEN, and the only vowels in those names are letters O:

The heft of something is its weight, its heaviness. The term “heft” is derivative of the verb “to heave” meaning “to lift, raise”.

Bong Joon-ho is an Oscar-winning director and screenwriter from South Korea. Bong co-wrote and directed the 2019 film “Parasite”, which became the highest-grossing South Korean film in history. He also directed the very successful English-language film “Snowpiercer” (2013).

Arena football is played indoors, on a smaller field than American (and Canadian) football. The sport was invented in 1981, and the Arena Football League (AFL) was around from 1987 till 2008. The AFL was revived in 2010, but went bankrupt in 2019.

31 *Abolitionist who was the first person executed for treason in the United States : JOHN BROWN

John Brown was a leader of the abolitionist movement who advocated the use of violence to end slavery in America. Famously, Brown led a raid on the federal arsenal at Harpers Ferry, Virginia in 1859 in an attempt to spark a slave revolt. Brown was captured, tried and found guilty of treason against the Commonwealth of Virginia. He was hanged for his crimes, and became the first person in the US to be executed for treason.

“Deus ex machina” is a Latin phrase that translates as “god out of the machine”. It describes a plot device used in some works whereby some apparently inextricable problem is suddenly resolved by an unexpected intervention. The term was first used in Horace’s “Ars Poetica”.

Tom Gordon is a retired professional baseball pitcher who set an MLB record of 54 consecutive saves. He retired after the 2009 season as the only pitcher with more than 100 wins, more than 100 saves, and more than 100 holds. Gordon gets a lot of mentions in Stephen King’s 1999 novel “The Girl Who Loved Tom Gordon”.

Doctor Doom is a supervillain in the Marvel Comics universe. He is an archenemy of the Fantastic Four.

“Masjid” is an Arabic word meaning “temple, place of worship”. It is from “masjid” that we get the English word “mosque”.

Quartz is a form of silicon oxide and is the second most abundant mineral found in the Earth’s crust, after feldspar. The name “quartz” comes into English via German, and probably ultimately derives from a Slavic word meaning “hard”.

3 Platform on a stage : RISER

“Sneaker” is a common name for an athletic shoe, one that is now used as everyday casual wear. The term “sneaker” is used widely across the US. Back in my homeland of Ireland, the terms “trainers” and “tennis shoes” are more common.

The twenty-dollar bill is called a “Jackson” as it bears the portrait of President Andrew Jackson on the front side of the bill. Jackson’s image replaced that of President Grover Cleveland in 1928, and there doesn’t seem to be any record documenting just why that change was made. Over one-fifth of all notes printed today are 20-dollar bills. The average life of a Jackson is a little over 2 years, after which it is replaced due to wear.

The term “tween” is used to describe preadolescence, the years “between” 8 and 12 years of age.

Much of an owl’s diet consists of small mammals. As a result, humans have used owls for centuries to control rodent populations, usually by placing a nest box for owls on a property. Despite the fact that owls and humans live together in relative harmony, owls have been known to attack humans from time to time. Celebrated English bird photographer Eric Hosking lost an eye when attacked by a tawny owl that he was trying to photograph. Hosking wrote a 1970 autobiography with the wry title “An Eye for a Bird”.