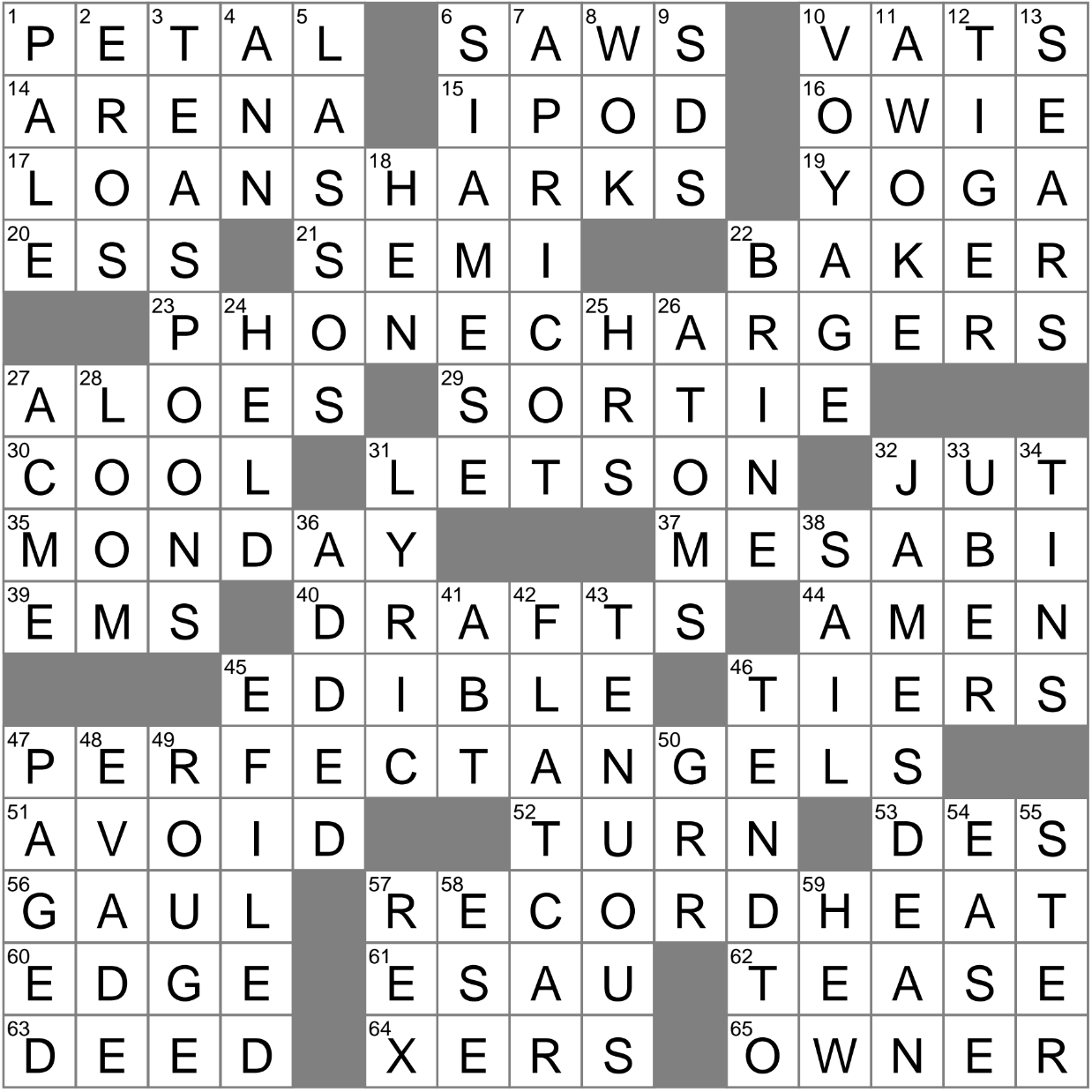 Today’s Theme (according to Bill): Do It, Team!

The flowering plant called a peony is named for Paean, the mythical physician to the Greek gods.

6 Tools that can be musical instruments : SAWS

The iPod is Apple’s discontinued signature line of portable media players. The iPod first hit the market in 2001 with a hard drive-based device, now known as the iPod Classic. Later models all used flash memory, allowing a smaller form factor. The smallest of the flash-based models is the iPod Shuffle, which was introduced in 2005.

“Tourney” is another word for “tournament”. “Tourney” comes from the Old French word “tornei” meaning “contest of armed men”, from “tornoier” meaning “to joust, jilt”.

The first documented use of gingerbread shaped in the form of human figures was in the court of Queen Elizabeth I. She used to have figures made to represent her important guests.

The Chargers were an AFL charter team, and so the franchise was founded in 1959. The Chargers played one season in Los Angeles, before moving to San Diego in 1961, and then returning to Los Angeles in 2017.

Succulent plants are those with thickened stems and/or leaves that have evolved to retain water. As such, succulents are often found where the climate is particularly dry. The term “succulent” comes from the Latin “sucus” meaning “juice, sap”.

A sortie is an attack by an armed unit, and usually a breakout by forces that are besieged, The term “sortie” comes directly from French and means “a going out”. “Sortie” is also used for a mission by a combat aircraft.

Here in the US, we tend to refer to the season following summer as “fall”. This name is short for “fall of the leaf”, referring to the loss of leaves by deciduous trees. The term “autumn” is a more common name used in Britain and Ireland instead of “fall”. However, back before the mid-1600s the term “fall” was in common use on the other side of the pond.

35 Workweek starter, for some : MONDAY

The day of the week called Monday is named for the Moon. “Monday” comes from the Old English “monenday” meaning “day of the moon”.

The Mesabi Range has the largest deposit of iron ore in the country, and is located in Minnesota. Robert Allen Zimmerman was raised in the area (whom we know him better as “Bob Dylan”) and he wrote a song called “North Country Blues” that tells of the decline of the mining industry in the Mesabi Range.

The Miami Heat basketball team debuted in the NBA in the 1988-89 season. The franchise name was chosen in a competitive survey, with “Miami Heat” beating out “Miami Vice”.

61 Jacob’s twin in the Book of Genesis : ESAU

Ann Patchett is an author who lives in Nashville, Tennessee. Patchett’s most famous work is probably her novel “Bel Canto”, published in 2001. In 2012, “Time” included her in the magazine’s list of 100 most influential people in the world.

The exact origins of the Siamese cat aren’t very clear, but it is believed to be from Southeast Asia. The Siamese takes its name from the sacred temple cats of Thailand (a nation once called “Siam”).

Although the apricot originated in Central Asia and China, the fruit is commonly associated with Armenia, where it has been cultivated for centuries. For that reason, the most common cultivar has the Latin name “Prunus armeniaca”.

Richard Sears was a station agent on the railroad. In the late 1800s, he bought up a shipment of unwanted watches that was left at his depot and sold the watches to other agents up and down the line. He was so successful that he ordered more watches and then came up with the idea of using a catalog to promote more sales. Sears hired his first employee in 1887, a watch repairman named Alvah Curtis Roebuck who was brought on to repair watches that were returned. Sear and Roebuck co-founded Sears Roebuck & co. in 1895. By the mid 1900s, Sears was the biggest retailer in the whole country.

Corned beef is beef that has been cured with salt. “Corn” is a term describing a grain of salt, giving the dish its name. Corned beef is also known as “salt beef”, and “bully beef” if stored in cans (from the French “bouilli” meaning “boiled”).

There are many types of loom used to weave cloth, but they all hold parallel threads in tension in one direction, while allowing the interweaving of threads in the perpendicular direction. The threads held under tension are the warp threads, and the “woven” threads are the “weft” threads.

32 “Rebel Without a Cause” star : JAMES DEAN

In his short life, James Dean starred in three great movies: “East of Eden”, “Rebel Without a Cause” and “Giant”, for which he received two posthumous Best Actor Oscar nominations (the only person to do so). On a fateful day in September 1955, Dean set off in Porsche for a race in Salinas, California. While driving to the race he was given a speeding ticket. Two hours later Dean was involved in a near head-on collision and was pronounced dead on arrival at a hospital in Paso Robles, California.

“Rebel Without a Cause” is a 1955 drama movie starring actor James Dean, who died just before the film’s release. The title comes from a 1944 book by psychiatrist Robert M. Lindner “Rebel Without a Cause: The Hypnoanalysis of a Criminal Psychopath”, although the content of the book has no bearing on the movie’s storyline. The three lead actors in the movie all died tragically, and while relatively young:

Altoids breath mints have been around since 1780, when they were introduced in Britain. The famous tin in which Altoids are sold is often reused for other purposes. The most famous use is as a container for a mini-survival kit.

Back in the early 40s, hipsters were just folks who were “hip”.

In the excellent Pixar film “Toy Story”, Rex is a tyrannosaurus, and a pretty clumsy one at that. He is voiced by actor Wallace Shawn, whose name is perhaps less familiar than his face. Shawn played the neighbor on “The Cosby Show” as well as many, many other supporting characters on TV and the big screen.