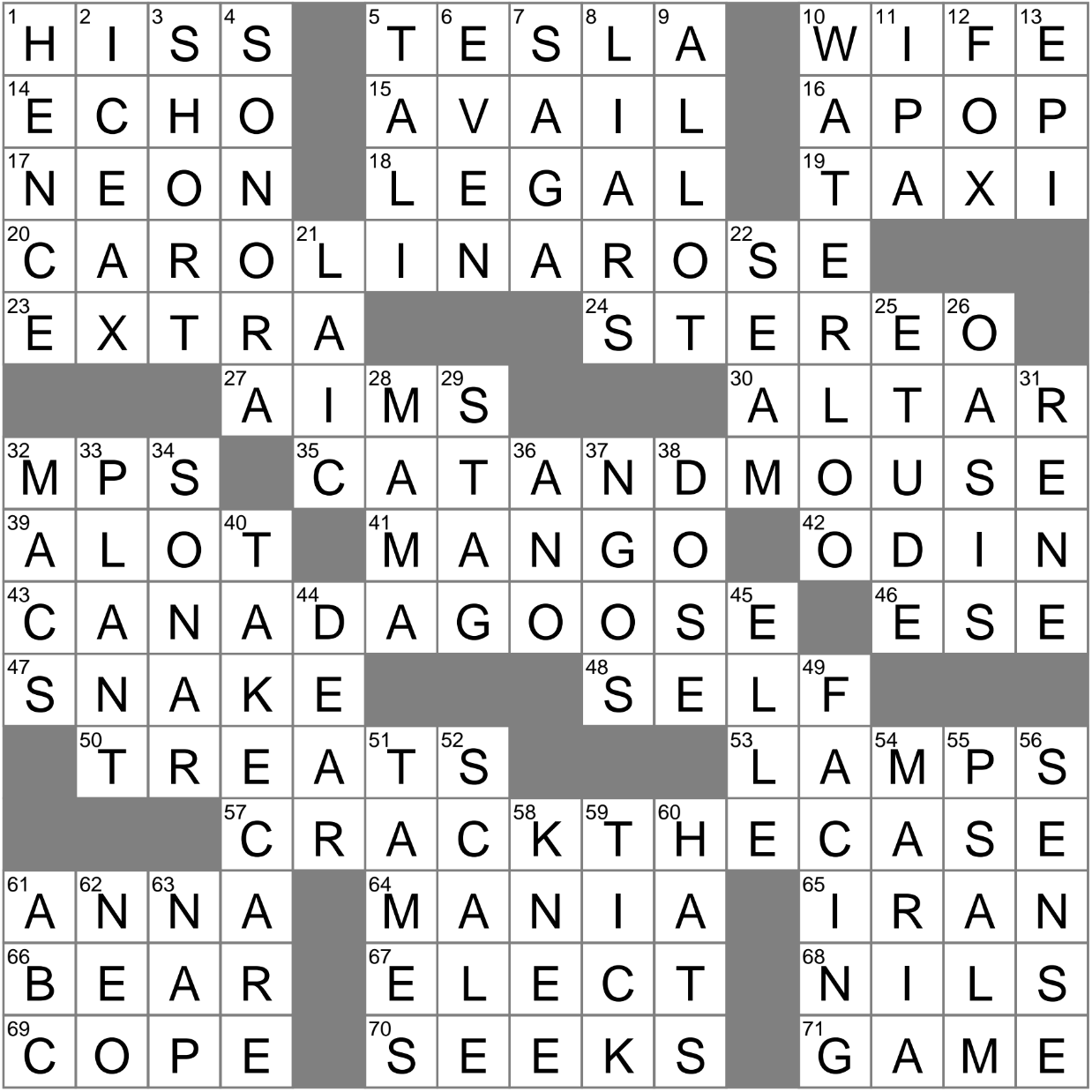 1 Warning sound from a rattlesnake : HISS!

The scales covering the tip of a rattlesnake’s tail are made of keratin, the same structural protein that makes up the outer layer of human skin, as well as our hair and nails. The rattlesnake shakes its tail vigorously to warn off potential predators, causing the hollow scales to vibrate against one another and resulting in that scary “rattle” sound. The rattler’s tail muscles “fire” an incredible fifty times a second to achieve that effect, demonstrating one of the fastest muscular movements in the whole animal kingdom.

The Carolina rose is a perennial shrub that also goes by the name “prairie rose”. Native to eastern North America, it can now be found over most of the North American continent.

Chutney is a typically southern Asian condiment made from spices with vegetables or fruit. The term “chutney” comes from the Sanskrit “caṭnī” meaning “to lick”.

In Norse mythology, Valhalla (“hall of the slain”) is a gigantic hall in the world of Asgard. Asgard and Valhalla are ruled by the god Odin, the chief Norse god.

The Canada goose has quite a distinctive coloring, with a black head and neck broken up by a white “chinstrap”. They thrive in parks that are frequented by humans, and are so successful that they are considered pests by some.

47 Reptile in the Chinese zodiac : SNAKE

Sonora is the state in Mexico that lies just south of Arizona and New Mexico. It is the second-largest state in the country, after Chihuahua.

An act of perjury is the willful giving of false testimony under oath. The term “perjury” ultimately comes from the Latin “per” meaning “away” and “iurare” meaning “to swear”.

10 ABBA hit with the line “I was defeated, you won the war” : WATERLOO

Our expression “sour grapes” is used to describe a negative attitude adopted by somebody towards something just because that person can’t have the thing himself or herself. The phrase alludes to one of Aesop’s fables, the story of “The Fox and the Grapes”. In the fable, a squirrel could climb up to grapes high in a tree that a fox was unsuccessful in getting to. On seeing this, the fox said, “It’s okay, the grapes were sour anyway”.

Our word “epilog” (also “epilogue”) applies to an addition at the end of a play or other literary work. The term ultimately comes from the Greek “epi-” signifying “in addition”, and “logos” meaning “speech”.

26 Welcome sight in the desert : OASIS

The talented actress Rene Russo is a native of Burbank, California. Russo went to high school (with actor/director Ron Howard), but dropped out in tenth grade. At seventeen, she was given the opportunity to train as a model and within a very short time appeared on the cover of “Vogue”. As her modeling jobs slowed down in her early thirties, Russo made a career change and studied theater and acting.

Maria Sharapova is a professional tennis player from the town of Nyagan in the Russian Federation. She is a former World No. 1.

“The Alphabet Song” was copyrighted in 1835 in the US. The tune that goes with the words is the French folk song “Ah! vous dirai-je, Maman”, used by Mozart for a set of piano variations. The same tune is used for the nursery rhyme “Twinkle Twinkle Little Star”.