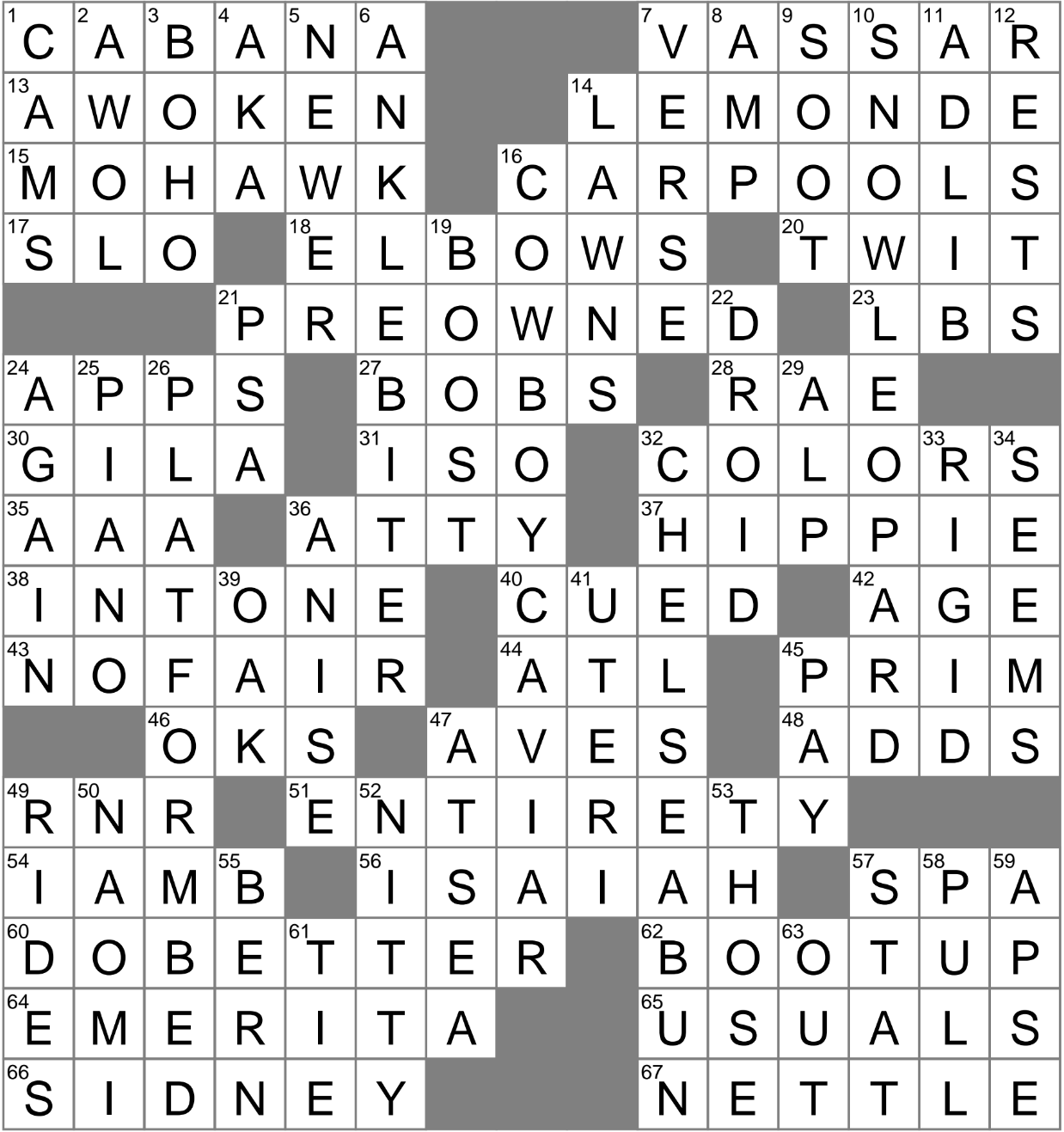 Themed answers each comprise two words and are in the down-direction. The UPPER word is a type of BOOT:

1 Enclosure for changing into a swimsuit : CABANA

7 One of the original Seven Sisters schools : VASSAR

“Le Monde” is a newspaper published each evening in France. It is one of the two most famous French papers, along with “Le Figaro”.

Here is another example of a difference in terminology on either side of the Atlantic. What we call the Mohawk hairstyle in the US is known as a Mohican in Britain and Ireland. The Mohawk hairstyle is named after the Mohawk nation, who wore their hair in the same fashion. The Mohawk style has been around for a long time elsewhere in the world. There was a well-preserved male body found in a bog near Dublin in Ireland in 2003. The body is about 2,000 years old, and has a Mohawk haircut.

“Twit” is a word not used very often here in America. It’s a slang term that used to be quite common in England where it was used for “someone foolish and idiotic”.

GameStop is the largest retailer of video games in the world. The company was founded as Babbage’s in 1984, and changed its name to GameStop in 1999. Famously, in January 2021, GameStop stock was subjected to a short squeeze that caused its share price to skyrocket to about 30 times its value at the beginning of the month. The short squeeze was triggered by users on a Reddit Internet forum piling onto the stock in the belief that it was significantly undervalued.

In search of (ISO)

37 Many a Woodstock attendee : HIPPIE

44 The Hawks, on scoreboards : ATL

The NBA’s Atlanta Hawks started out as the Buffalo Bisons in 1946, although after only a few months the team was moved to Moline, Illinois as the Tri-Cities Blackhawks. The Blackhawks were one of the 17 original teams playing at the founding of the National Basketball Association. There was another move in 1951 and a renaming to the Milwaukee Hawks, and yet again in 1955 when the team became the St. Louis Hawks. The latest move was to Atlanta, in 1968.

62 Start, as a computer, and what each answer to a starred clue has? : BOOT UP

The verb “to boot”, as used in the world of computers, comes from the phrase “pull oneself up by one’s bootstraps”. The idea is that the software that has to be loaded before a computer can do anything useful is called a “bootstrap load”.

64 Retired, as a professor : EMERITA

Hollywood actor Sidney Poitier was born in Miami, but grew up in the Bahamas. Poitiers breakthrough role in movies came with 1955’s “Blackboard Jungle”, in which he played an incorrigible high school student. I find it interesting that one of Poitier’s most respected performances found him playing a teacher of a rough set of students in 1967’s “To Sir, with Love”. Off the screen, Poitier entered the diplomatic service for the Bahamas, serving as the nation’s non-resident ambassador to Japan from 1997 until 2007.

Most nettle species have stinging hairs that secrete formic acid. This formic acid is the same chemical that is found in the venom injected with a bee or ant sting. The Latin word for ant is “formica”, which gives its name to the acid.

Snow leopards are creatures that tend to keep to themselves, living in high ground in the mountain ranges of Central and South Asia. Given that they are so “secretive”, estimates of the size of the snow leopard population are pretty rough, with perhaps 3,500 to 7,000 in the wild.

“Ad libitum” is a Latin phrase meaning “at one’s pleasure”. In common usage, the phrase is usually shortened to “ad-lib”. On the stage, the concept of an ad lib is very familiar.

Texas caviar (also “cowboy caviar”) is a salad comprising black-eyed peas in a vinaigrette dressing. The recipe was created in 1940, and first served at New Year’s Eve in the Houston Country Club.

Switzerland is a landlocked country in Central Europe that comprises four distinct linguistic and cultural regions: German, French, Italian and Romansh. It is a very developed nation, and has the highest nominal wealth per adult in the world. Having visited, I can attest to the steep prices encountered by tourists …

Chelsea buns look like cinnamon rolls with currants incorporated. They were first produced in the 1700s in a bakery called the Bun House in the Chelsea district in London, hence the name.

These days, we don’t usually consider acorns (the fruit of the oak tree) as a foodstuff. But in days past, many cultures around the world have used acorns as food. Usually, bitter tannins that occur in acorns need to be leached out in water. Acorn meal can be a substitute for grain flour, which can then be used to make bread. Acorns have also been used as a substitute for coffee, especially when coffee was rationed. Notably, acorn coffee was brewed up by Confederates during the American Civil War, and by Germans during World War II.