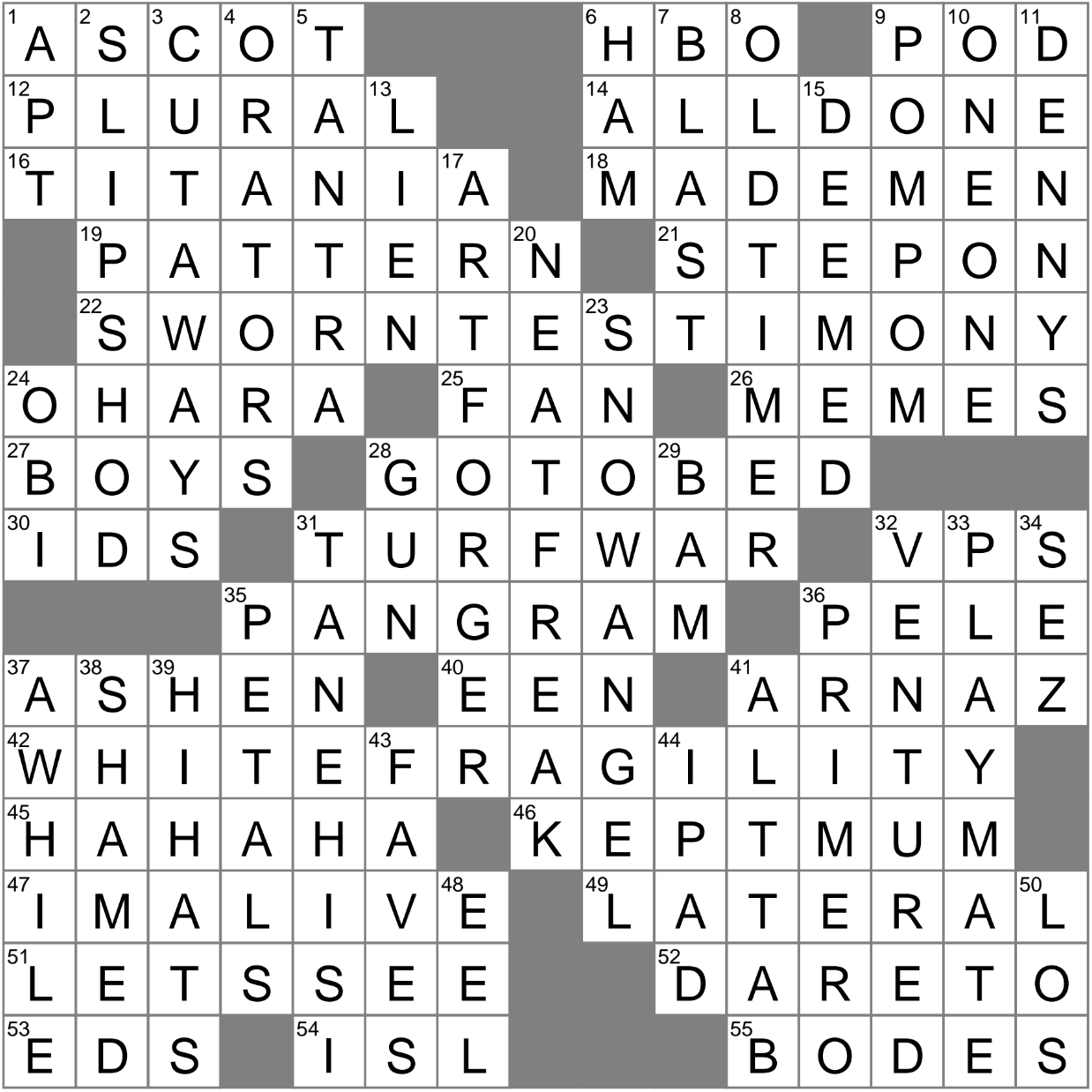 1 Accessory that may be paired with a smoking jacket : ASCOT

The plant known as okra is mainly grown for its edible green pods. The pods are said to resemble “ladies’ fingers”, which is an alternative name for the plant. Okra is known as “ngombo” in Bantu, a name that might give us the word “gumbo”, the name for the name of the southern Louisiana stew that includes okra as a key ingredient.

All of the twenty-seven moons of the planet Uranus are named for characters from literature, with each being characters created by William Shakespeare and Alexander Pope. The five major moons are so large that they would be considered planets in their own right if they were orbiting the sun directly. The names of these five moons are:

18 Many of the “GoodFellas” main characters : MADE MEN

In the Mafia, a made man is a fully initiated member. A made man might also be called a goodfella or a wiseguy.

24 Maureen presented with an Honorary Academy Award in 2014 : O’HARA

The beautiful and talented Maureen O’Hara was an Irish actress, someone famous for films made with fellow actor John Wayne and director John Ford. Soon after color films hit the theaters, O’Hara earned the nickname “Queen of Technicolor”. This was because the combination of her vivid red hair and bright green eyes showed off the new technology to full advantage. O’Hara was born in a suburb of Dublin called Ranelagh, where many of my own ancestors were born …

35 Puzzle that uses every letter : PANGRAM

A pangram is a phrase that includes all the letters of the alphabet. The most famous example in English is “the quick brown fox jumps over the lazy dog”.

36 Athlete who wrote the memoir “My Life and the Beautiful Game” : PELE

“Being the Ricardos” is a 2021 biopic about the lives of married couple Lucille Ball and Desi Arnaz. Lucy and Desi are played by Nicole Kidman and Javier Bardem. The title comes from the show “I Love Lucy”, in which Ball and Arnaz played Lucy and Ricky Ricardo. I haven’t seen this one, but it’s on my list as the film was written and directed by the great Aaron Sorkin …

“White Fragility: Why It’s So Hard for White People to Talk About Racism” is a 2018 book about race relations in America penned by Robin DiAngelo.

Forward and lateral passes are thrown in several sports, including American and Canadian football.

Someone of something described as slipshod is slovenly in appearance or sloppy. The term “slipshod” probably comes from the idea of someone appearing in one’s slippers, someone who hasn’t made an effort in their dress.

In filmmaking, a cutaway scene is one inserted into another scene, thereby interrupting the continuously filmed action. After the cutaway, the film usually returns to the original scene.

Sanskrit is an Indo-Aryan language and one of the 22 scheduled languages of India. It has a rich tradition and is the language in which many historical and religious texts are written. There aren’t many speakers of the language today although efforts are underway to revive spoken Sanskrit.

The French call a ball made of tufted wool a “pompon”, a word that we imported into English directly as “pompon”. We use “pompon” to describe perhaps bobbles on some hats, or the tufted balls that are shaken by cheerleaders at sports events. Over time, the spelling “pompom” has become common in English, probably due to mishearing. To confuse matters a little, we also use the word “pom-pom”, which is a nickname for a British autocannon used mainly as an anti-aircraft weapon, particularly during WWII.

Denny’s was the first restaurant I ate at on my initial visit to the US many moons ago. I thought I was in heaven. I’ve changed my opinion a little since then! Denny’s is famous for being “always open” (almost), something that blew my mind as a visitor from Ireland back in 1980. Denny’s was founded in 1953 in Lakewood, California, and originally went by the name “Denny’s Donuts”. The enduring Grand Slam breakfast has been on the menu since 1977.

31 “Between the World and Me” writer Coates : TA-NEHISI

Ta-Nehisi Coates is a journalist and author from Baltimore, Maryland. His 2015 book “Between the World and Me” won that year’s National Book Award for Nonfiction. Coates also made a name for himself in the world of comic books, and is the writer of a “Black Panther” series for Marvel Comics.

On a Windows computer, the Alt-Tab keyboard shortcut allows a user to switch between open windows.

“Unadon” is the Japanese word for “eel bowl”. “Unadon” is actually a contraction of “unagi no kabayaki” (grilled eel) and “donburi” (rice bowl dish).

“Los Espookys” is a comedy TV show about a group of friends who try to make a business out of fabricating horror scenes. Sounds a bit weird to me …