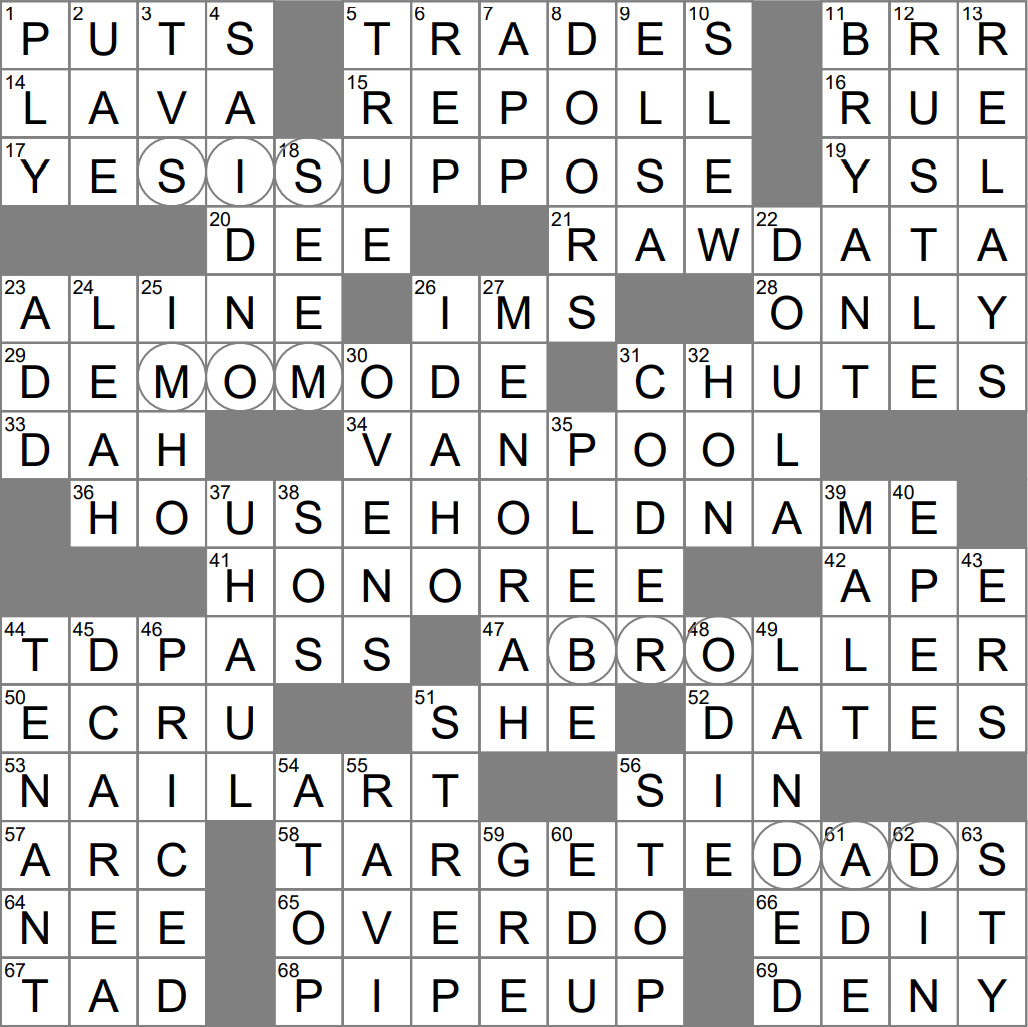 Themed answers each include the NAME of a member of a HOUSEHOLD as a hidden word:

23 Dress with a flared skirt : A-LINE

An A-line skirt is one that fits snugly at the hips and flares towards the hem. The term “A-line” was first used in fashion by French designer Christian Dior in his 1955 spring collection.

A chute is an inclined plane or channel through which things pass under the influence of gravity.

Canadian actress Tatiana Maslany had her work cut out in the show “Orphan Black”. That’s because she had to play several different characters, all clones born by in vitro fertilization. She also plays the title character Jennifer Walter in the Superhero TV show “She-Hulk: Attorney at Law”.

Even though “Kleenex” is sometimes used today as a generic term for a tissue, “Kleenex” is a brand name owned by Kimberly-Clark. Kleenex facial tissues came about after WW1. The material used in the tissue had been developed as a replacement for cotton that was in high demand as surgical tissue during the war. The material developed was called “Cellucotton” and was used in gas mask filters. It was first sold as a facial tissue under the name “Kleenex” in 1924.

Lane Bryant is a women’s clothing store that specializes in plus-size items. It was founded way back in 1904 by Lena Himmelstein Bryant Malson, when It focused on the sales of maternity clothes.

To rustle up or scare up something is to find it by searching, by using some effort.

A doula is a person who provides non-medical support for women and their families during childbirth as well as in the period immediately following the arrival. The term “doula” comes from the Ancient Greek word “doule” which means “female slave”. Given such a negative association, “doula” is often dropped in favor of “labor companion” or “birthworker”.

Leah Remini is an actress and comedian who is best known for playing Carrie Heffernan on the sitcom “The King of Queens”. More recently, in 2013, Remini competed on “Dancing with the Stars”. After that, Remini appeared as a guest co-host on the show several times. Famously, Remini was a member of the Church of Scientology, and left the organization in 2013. Since leaving, Remini has been very vocal in her criticism of the practices and policies of the church.

“Kevin Can Wait” is a sitcom starring comedian Kevin James that premiered in 2016. James plays retired police officer. In season one, he co-starred with Erinn Hayes, who played the police officer’s wife. Things didn’t work out between the show’s producers and actress Hayes, so her character was killed between seasons one and two, and a new female lead character was introduced, played by Leah Remini. James and Remini had played husband and wife on the very successful sitcom “The King of Queens”.

Idaho has the nickname “Gem State”, mainly because almost every known type of gemstone has been found there. Idaho is also sometimes called the Potato State, as potatoes are such a popular crop in the state. I’d go for the potatoes over the gems, but that’s probably just me. Oh, and Idaho license plates have borne the slogan “Famous Potatoes” for decades …

The term “Hanukkah” (also “Chanukah”) comes from the Hebrew for “to dedicate”. Hanukkah is a holiday lasting eight days that commemorates the rededication of the Holy Temple of Jerusalem after a successful Jewish revolt against the Seleucids in the 2nd-century BCE. The story of Hanukkah includes the miracle of the one-day supply of oil that kept the menorah alight for eight days.

A plebe is a freshman in the US military and naval academies. The term “plebe” is probably short for “plebeian”, the name given to someone of the common class in ancient Rome (as opposed to a Patrician). “Pleb” is a shortened version of “plebeian”, and is a term used outside of the military schools.

44 One paying rent to a landlord : TENANT

A tenant is a person or entity “holding” property by virtue of title or lease. The term “tenant” comes from the Latin “tenere” meaning “to hold”.

The phrase “inside the Beltway” is used to refer to the infrastructure and politics of Washington, D.C. The Beltway in this case is Interstate 495, also known as the Capital Beltway.