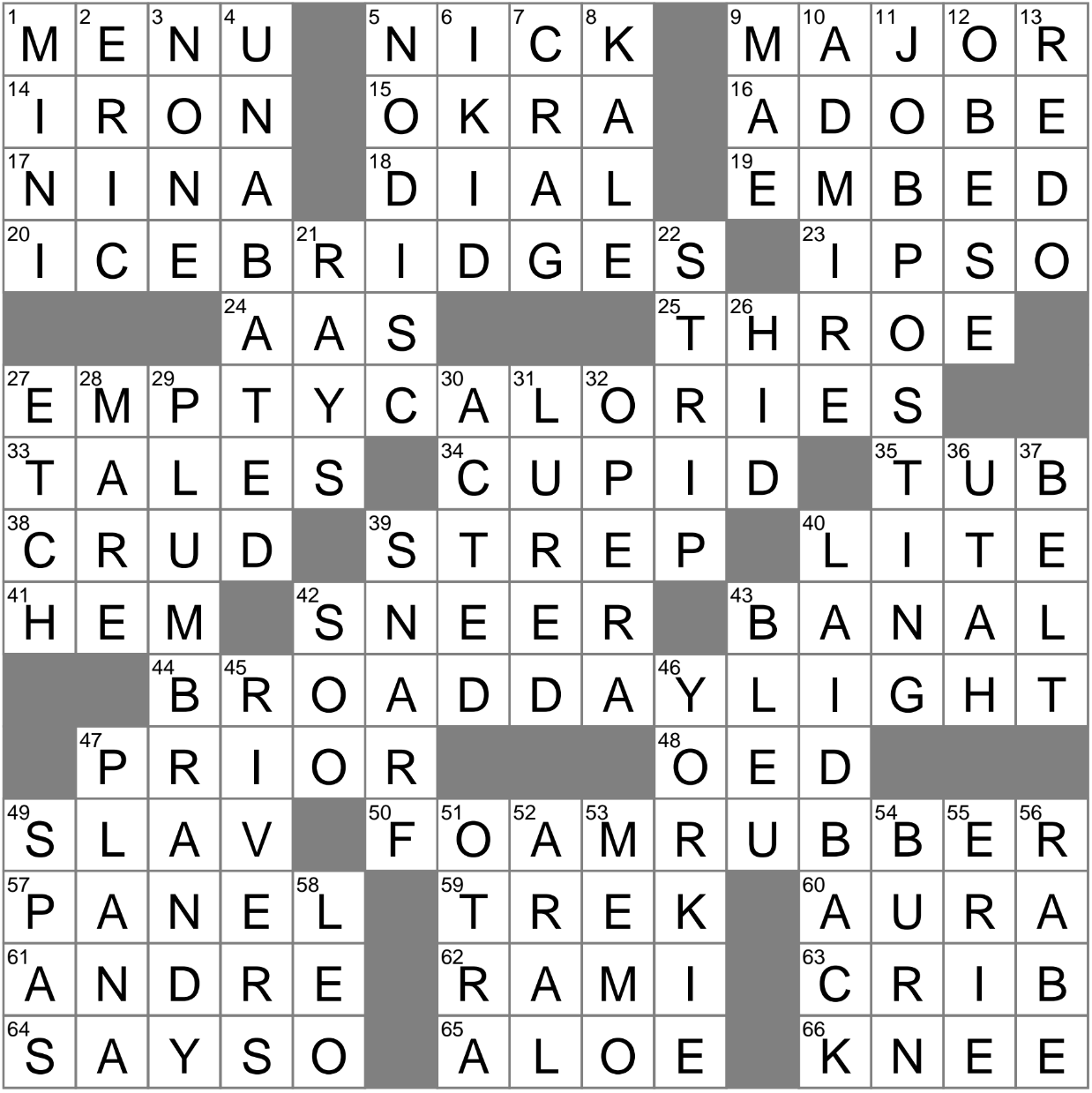 Themed answers each end with something one might BURN:

The first patent for a rotary dial mechanism for a phone was granted in 1898, and the familiar rotary dial phones (with holes for the finger) were introduced by the Bell System in 1919. This form of dialing was called “pulse dialing”. When you dialed the number 5, say, the dial would rotate back to the start position, opening and closing electrical contacts five times and sending five pulses over the telephone line. I used to love rotary dial phones when I was a kid. My grandfather was a telephone engineer and he showed me how to “tap out” the pulses on the “hook” at the top of a pay phone. I was able to make free calls that way. He definitely contributed to the delinquency of a minor …

The word “crud”, meaning “something disgusting”, is American slang dating back to the 1920s. Originating in the US Army, the term was used in place of “venereal disease”.

A lexicon was originally just a dictionary, but we tend nowadays to use the term more to mean a vocabulary that relates to some specific area of activity.

49 Many an Eastern European : SLAV

A pundit is a learned person to whom one might turn for an opinion. “Pundit” is derived from the Hindi word “payndit” meaning “learned man”.

“Parenthood” is a TV series that originally aired from 2010 until 2015, and is loosely based on the 1989 film of the same name starring Steve Martin. Ron Howard directed the film, and served as executive producer for the TV show.

Indeed (Indeed.com) is a search engine used as a tool to sort through online job listings. Indeed was co-founded in Austin, Texas and Stamford, Connecticut and became a subsidiary in 20121 of Recruit, a company based in Tokyo, Japan.

Etch A Sketch was introduced in 1960. The toy was developed in France by inventor André Cassagnes, who initially named it “L’Écran Magique” (The Magic Screen).

I’m a bit jaded with big stage musicals I must admit, but I will always have time for Andrew Lloyd Webber’s masterpiece “The Phantom of the Opera”. “Phantom …” is the longest running musical in the history of Broadway, and deservedly so. There is a sequel, titled “Love Never Dies”, that opened in London’s West End in March 2010. But, it hasn’t been well received.

The Great Salt Lake in Utah is extremely shallow, and so the area of the lake fluctuates greatly with the changing volume of water. Back in 1963, the lake shrunk to 950 square miles, whereas in 1988 the area was measured at a whopping 3,300 square miles.

Phillipa Soo is an actress and singer who is perhaps best known for portraying Elizabeth Schuyler Hamilton, the title character’s wife in the original Broadway production of “Hamilton”.

At 2,341 miles, the Missouri is the longest river in North America. Rising in Montana in the Rocky Mountains, it flows into the Mississippi at St. Louis. The Mississippi-Missouri river system is the fourth largest on the planet.

The Yorkshire terrier is a breed of dog from the county of Yorkshire in the north of England. That part of the country became very industrialized in the 19th-century, and was home to hundreds of clothing mills. The “Yorkie” was developed to catch rats in those mills.

The Aral Sea is a great example of how humankind can have a devastating effect on the environment. In the early sixties the Aral Sea covered 68,000 square miles of Central Asia. Soviet irrigation projects drained the lake to such an extent that today the total area is less than 7,000 square miles, with 90% of the lake now completely dry. Sad …

54 “Hamilton” song about destroying love letters, or what one can do to the ends of the answers to the starred clues : BURN

“Hamilton” is a 2015 musical based on the life of US Founding Father Alexander Hamilton, as described in the 2004 biography by Ron Chernow. The show opened off-Broadway in February 2015, and transferred to Broadway in August of the same year. Advance ticket sales for the Broadway production were unprecedented, and reportedly amounted to $30 million. The representations of the main characters are decidedly ground-breaking. The show is rooted in hip-hop and the main roles such as Hamilton, Thomas Jefferson and George Washington are all played by African-American and Hispanic actors.

Broccoli rabe is perhaps better known as “rapini”, and is a vegetable often used in Mediterranean cuisines. It is quite delicious sauteed with garlic …

Russian author Leo Tolstoy is best known for his novels “War and Peace” and “Anna Karenina”. He also wrote the much-respected novellas “Hadji Murad” and “The Death of Ivan Ilyich”.