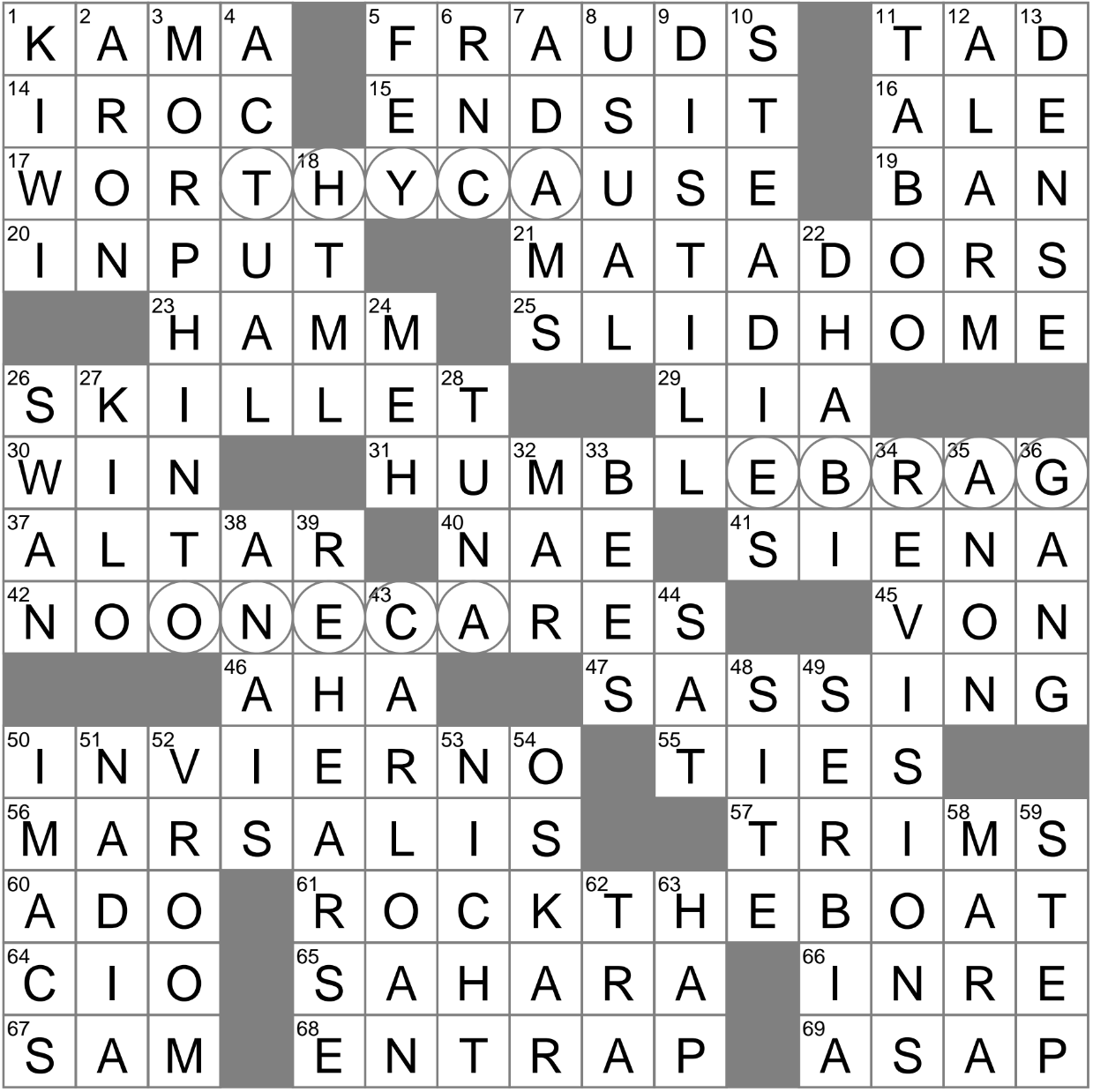 Themed answers each contain a BOAT as a hidden word, a BOAT that’s ROCKY/anagrammed:

Ban was the first roll-on deodorant, introduced in 1952. The formulation for Ban is the same as the brand called Mum, the first commercial deodorant, which dates back to the late 1800s.

Right Guard was the first aerosol antiperspirant, and was introduced in the early sixties.

Francesca Lia Block is an author of fiction for young adults. Her most famous work is the “Dangerous Angels” series of novels, the first of which is “Weetzie Bat” published in 1989. The novels are set in a somewhat surreal version of Los Angeles that goes by the name “Shangri-L.A.”

The term “humblebrag”, meaning “self-deprecating boast”, was coined by Harris Wittels, a writer for the sitcom “Parks and Recreation”.

41 Tuscan city whose university was founded in 1240 : SIENA

American footballer Von Miller started his professional career with the Denver Broncos in 2011. A year later, Miller founded the Von’s Vision foundation that provides free eye exams and glasses for children living in the Denver area.

Wynton Marsalis is a trumpeter and composer. He holds the position of Artistic Director of Jazz at Lincoln Center in New York City. In 1997, Marsalis became the first jazz musician to win the Pulitzer Prize for Music.

65 Much of North Africa : SAHARA

Actor Sam Waterston is perhaps best known for his roles on television. He played District Attorney Jack McCoy on “Law & Order” for several years, and more recently was cast alongside Martin Sheen, Jane Fonda and Lily Tomlin in the Netflix original “Grace and Frankie”.

2 “East of Eden” brother based on Abel : ARON

John Steinbeck considered his 1952 novel “East of Eden” to be his magnum opus. Most of the storyline takes place near Salinas, just south of the San Francisco Bay Area. Two of the characters in the story are brothers Cal and Aron Trask, representative of the biblical Cain and Abel.

5 Tina with a recurring role on “Only Murders in the Building” : FEY

Bryan Adams is a Canadian singer-songwriter. He is also a very accomplished photographer, and his images have been published quite widely.

The initialism “HTML” stands for HyperText Markup Language. HTML is the language used to write most Internet web pages (including this one).

Hans Christian Andersen’s tale “The Ugly Duckling” has to be one of the most endearing ever written. Unlike so many fairy tales, “The Ugly Duckling” isn’t based on any folklore and is simply a product of Andersen’s imagination. It is speculated that Andersen was the illegitimate son of the Crown Prince of Denmark, and that he wrote the story of the ugly duckling that turned into a beautiful swan as a metaphor for the secret royal lineage that was within Andersen himself.

Today, the gram is defined as one thousandth of a kilogram, with the kilogram being equal to the mass of a physical sample preserved by the International Bureau of Weights and Measures (well, up until 2019, when it became more hi-tech than I can explain!). Prior to 1960, the gram was defined as the weight of a cubic centimeter of pure water (at the temperature of melting ice).

In Japanese cuisine, “negitoro” is the fatty parts of tuna that are not usually used for other dishes. Negitoro is often served with green onion.

Romanian Nadia Comaneci won three golds in the 1976 Summer Olympics and was the first gymnast to be awarded a perfect score of ten in the gymnastics competition. Comaneci published a book called “Letters to a Young Gymnast” in 2003, and now lives in the United States.

Irish actor Liam Neeson got his big break when he played Oskar Schindler in the Spielberg epic, “Schindler’s List”. Neeson was in the news some years later when he lost his wife, actress Natasha Richardson, in a tragic skiing accident in 2009. Earlier in his life, in the 1980s, Neeson lived for several years with Oscar-winning actress Helen Mirren.

Mara Wilson started her acting career as a child actress, appearing in “Mrs. Doubtfire”, the 1994 version of “Miracle on 34th Street”, and the title character in “Matilda”.