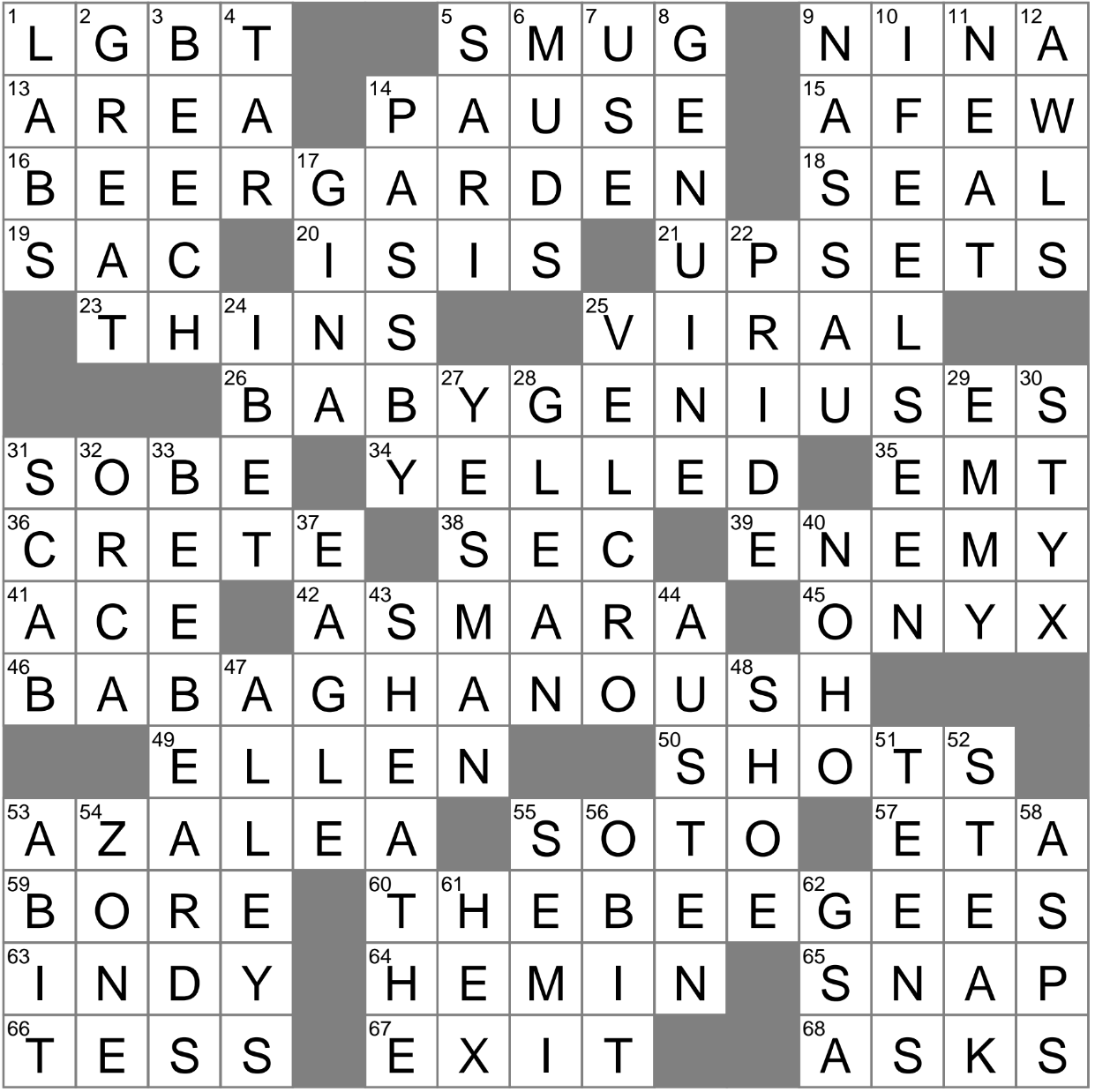 Nina Dobrev is a Canadian actress who was born in Sofia, Bulgaria. She is perhaps best known for playing a lead role in the TV version of L. J. Smith’s series of books “The Vampire Diaries”.

20 Goddess who wears a headdress with cow horns : ISIS

The most dominant person in a situation is the “top dog”. The person likely to be beaten is the “underdog”.

TikTok is a video-sharing service that is based in China, and is very popular with the younger set I am told). The TikTok mobile app provides tools facilitating production of sophisticated selfie videos that use special effects.

“Baby Geniuses” is a 1999 comedy movie starring Kathleen Turner, Christopher Lloyd and Kim Cattrall. There is a lot of “baby talk” in the film, and CGI (computer-generated imagery) was used to match the movement of the lips of babies with the dubbed speech. In fact, “Baby Geniuses” was the first movie to use CGI to synthesize human visual speech.

Actress Kathleen Turner was favorably compared to Lana Turner because of her deep voice, especially after her sultry performance in the 1981 movie “Body Heat”. Turner commanded leading roles through the eighties but her career hit a roadblock in the early nineties when she found herself in constant pain caused by rheumatoid arthritis. Thankfully, the disease is now in remission, and Turner has been seen more and more on the stage and screen in the last two decades.

The brand name “SoBe” can be found on teas, juices and bottled waters. “SoBe” is an abbreviation for “South Beach”, the neighborhood in Miami Beach, Florida.

Asmara is the capital and largest city in Eritrea. The same city is known locally as “Asmera”.

Eritrea is a country located in the Horn of Africa, and surrounded by Sudan, Ethiopia, Djibouti and the Red Sea. Some scientists believe that the area now known as Eritrea was the departure point for anatomically modern humans who first left Africa to populate the rest of the world.

Baba ganoush (also “baba ghanouj”) is an Arab dish with the main ingredient of mashed eggplant. It is sometimes served as a (delicious) dip.

Ellen Barkin is an actress from the Bronx in New York City. I mostly know Barkin from her roles in the 1989 movie “Sea of Love” and 2007’s “Ocean’s Thirteen”.

Azaleas are very toxic to most animals. If you go to Korea, you might come across “Tug Yonju”, which is azalea wine made from the plant’s blossoms. Azaleas are usually grown as shrubs, but are also seen as small trees, and often indoors.

Juan Soto is a professional baseball player from Santo Domingo in the Dominican Republic. He made his MLB debut with the Washington Nationals in 2018, and in so doing became the youngest player in the majors (at 19).

60 Rock and Roll Hall of Fame trio, and an apt name for a trio of answers in this puzzle : THE BEE GEES

The Brothers Gibb (hence, the name “Bee Gees”) were born in England but grew up and started their musical careers in Australia. They moved back to Manchester in the north of England as youths, and there hit the big time.

Tess Holliday is a plus-size model and “body-positive activist”. She was born Ryann Hoven and changed her name to Tess Munster when she started modeling. That choice was purely because she was a fan of “The Munsters” TV show. In 2015, she adopted the family name of Nick Holliday, the father of her two children.

9 Largest city in the Bahamas : NASSAU

Nassau is the capital of the Bahamas, and used to be called Charles Town. Located on the island of New Providence, the original settlement was burnt to the ground by the Spanish in 1684. It was rebuilt and named Nassau in honor of King William III of England (“William of Orange”), a Dutchman from the House of Orange-Nassau. Nassau is a favored location for the James Bond series of movies. The city and surroundings feature in “Thunderball”, “Never Say Never Again”, “Casino Royale” and “For Your Eyes Only”. Bond portrayer Sean Connery lived for many years at Lyford Cay, which is just a 30-min drive from the center of Nassau.

Gina Lollobrigida is an Italian actress, and also a photojournalist and sculptor. After her career in movies started to slow down in the seventies, she turned to photojournalism. She has photographed many of the greats, including Paul Newman, Salvador Dali, Audrey Hepburn and even the German national soccer team. In fact, she was also able to arrange an exclusive interview with Fidel Castro, much to the chagrin of the world’s professional journalists.

Perhaps Jane Austen’s most famous ironic statement comes at the start of her 1813 masterpiece “Pride and Prejudice”:

It is a truth universally acknowledged, that a single man in possession of a good fortune, must be in want of a wife.

The hook-and-loop fastener that we now call “Velcro” was invented in 1941 by Georges de Mestral, a Swiss engineer. Mestral noticed that the seeds of the burdock plant (burrs or burs) stuck to his clothes. Under the microscope he found hooks on the burrs that grabbed hold of loops in his clothing. After years of development, he came up with a way of simulating the natural hook using man-made materials, and Velcro was born.

30 Mythical river of the underworld : STYX

Some apiarists (beekeepers) can be seen wearing thousands of bees on the face, forming a bee beard as a form of entertainment for an audience.

The eyesight of an eagle is extremely powerful, and is estimated to be 4-8 times stronger than that of an average human. A large eagle, weighing about 22 lb, has the same size eyes as a human weighing about 200 lb.