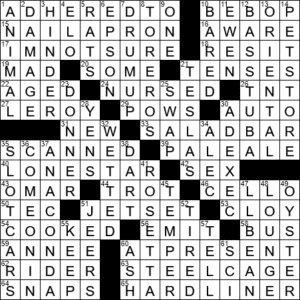 LeRoy Neiman is an artist from Braham, Minnesota who is known for his vibrant paintings of athletes and sporting events. Niemen lives in a home in New York City overlooking Central Park that has a great pedigree in terms of residents. Former occupants include artist Norman Rockwell as well as entertainers Rudolph Valentino and Noël Coward.

Omar Vizquel is a former MLB shortstop who has the nickname “Little O”. Among his many achievements on the field, Vizquel became the oldest person to play shortstop in an MLB game. He retired from the game in 2007 at 40 years old.

46 Instrument with an end pin : CELLO

In French, there are “douze mois” (twelve months) in an “année” (year).

“Don’t Bring Me Down” is the biggest hit that the Electric Light Orchestra (ELO) had in the US. The song was dedicated to NASA’s Skylab, which reentered the earth’s orbit in 1979, the same year the song was released.

“Black Hawk Down” is a 2001 film adaptation of a 1999 book of the same name by Mark Bowden. Both book and movie tell the true story of two US Black Hawk helicopters that were downed in the 1993 Battle of Mogadishu, and the resulting casualties.

Tesla’s Model 3 was introduced in 2017. Within three years, Tesla sold more than half a million Model 3 units, making it the best-selling electric car of all time.

Director and producer Richard Donner has directed some blockbuster films in his time, including “The Omen”, “Superman” and the “Lethal Weapon” series. The Donners’ Company, which he co-owns with his wife, produced the “X-Men” films.

“It’s Complicated” is a fun 2009 Nancy Meyers romcom starring Meryl Streep, Alec Baldwin and Steve Martin. I thoroughly enjoyed this movie, despite being disappointed with the casting of the two male leads. If you see the film in the future, take note of the house and garden that Meryl Streep’s character lives in. My kind of pad …

Rosetta is a coastal city and port on the Mediterranean coast of Egypt. The Rosetta Stone is an ancient Egyptian artifact of tremendous importance in deciphering Egyptian hieroglyphics. Carvings on the stone are actually three translations of the same passage of prose, one in Egyptian hieroglyphics, one in Egyptian Demotic language, and one in classical Greek. The stone was discovered by the French military during Napoleon’s 1798 campaign in Egypt. Before the French could get it back to France, the stone somehow ended up in enemy hands (the British), so it is now on display in the British Museum. Ownership of the stone is very much in dispute. The French want it and, understandably, the Egyptians would like it back.