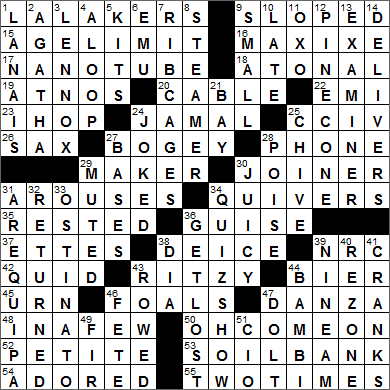 17. Tiny cylindrical structure NANOTUBE
Nanotubes, particularly those made from carbon, are the subject of a lot of research and development right now. Nanotubes are extremely thin, and in some cases the tube walls are only one-atom thick. On the other hand, nanotubes can be quite long, with some tubes having been grown to about half a meter.

19. B’s 5 and C’s 6 AT NOS
The atomic number of an element is also called the proton number, and is the number of protons found in the nucleus of each atom of the element.

The chemical element carbon has the symbol “C” and the atomic number of 6. Pure carbon exists in several physical forms, including graphite and diamond.

22. Label for the Poison album “Poison’d!” EMI
EMI was a British music company, with the acronym originally standing for Electric and Musical Industries.

Poison is a glam metal band from Mechanicsburg, Pennsylvania that was most successful in from the mid-eighties to the mid-nineties.

Link sausages are so called as they can come in chains, with each sausage being a link in that chain.

27. Radar screen blip BOGEY
“Bogey” is WWII slang for an unidentified aircraft that is presumed to be hostile.

34. Places to see arrows QUIVERS
A “quiver” is a container used for carrying arrows.

39. Energy Reorg. Act of 1974 creation NRC
The Atomic Energy Commission (AEC) was set up right after WWII in 1946, with the aim of promoting the peaceful use of atomic energy. Establishing the AEC was a significant move made by President Truman, as it passed control of atomic energy from the military to the civilian sector. The AEC continued to operate until 1974 when its functions were divided up into two new agencies: the Energy Research and Development Administration and the Nuclear Regulatory Commission (NRC).

42. Pounds QUID
“Quid” is a slang term for a pound sterling (i.e. a UK pound). Used in this context, the plural of “quid” is “quid”, as in ten pounds, ten quid. It’s not certain where the term comes from, but it is possibly derived somehow from the Latin phrase “quid pro quo” meaning “this for that”.

44. Krombacher output BIER
Krombacher is a very successful brewery in Germany, the second largest in the country.

45. Keats’ “Sylvan historian” URN
Here’s the first verse of the poem “Ode on a Grecian Urn” by John Keats:

Keats describes the urn as a “sylvan historian”, with the design on the urn depicting a tale (history) of people who live in forests (sylvan).

47. “Taxi” actor DANZA
The actor Tony Danza is noted for his roles in the TV shows “Taxi” and “Who’s the Boss?” Danza is from Brooklyn, New York and his real name is Antonio Iadanza. He was a professional boxer before his acting career took off.

52. Debussy’s “__ Suite” PETITE
Claude Debussy wrote his “Petite Suite” in the late 1880s. It is suite of four movements for the piano that is written for four hands.

53. Title I of the Agricultural Act of 1956 SOIL BANK
The Agricultural Act of 1956 defined the Soil Bank Program that authorized payments to farmers who retired land from production for a ten-year period. The purpose of the program was to reduce production of crops that were in ready supply, hence bolstering farm incomes. The program also conserved soil, hence its title.

Down
1. Outdoor sitting areas LANAIS
A lanai is a type of veranda, a design that originated in Hawaii. A kind blog reader tells me that the etymology of “lanai” seems unclear, but that the island name of “Lana’i” is not related.

2. Dame of mystery AGATHA
Agatha Christie is the best-selling novelist of all time, having sold about 4 billion copies worldwide in total. The only books to have sold in higher volume are the works of William Shakespeare and the Bible.

3. Former heavyweight champ __ Lewis LENNOX
The boxer Lennox Lewis was born in London, England but moved with his family to Ontario, Canada when he was 12-years-old. He won a gold medal for Canada in the 1988 Summer Olympics in Seoul, and soon after moved back to his native England. In 1993 he was declared WBC heavyweight champion for the first time. In his spare time, Lewis is an avid chess player, and funded an after-school chess program for disadvantaged youths.

5. Little beavers KITS
Beavers are monogamous and mate for life. The offspring of a beaver couple are called kits.

6. Cassowary cousin EMU
The cassowary is a large, flightless bird found mainly in New Guinea. One species of cassowary is the third tallest bird on the planet, second only to the ostrich and the emu.

8. __ trunk STEAMER
Back in the late 18th and early 19th centuries, steamer trunks were the equivalent of our modern carry-on bags. They were containers for clothes and other belongings that had flat tops and low profiles so that they could fit under a bunk on a steamer (steam ship) or on a train. Steamer trunks usually contained a passenger’s essentials, with the bulk of the items stored in the main luggage.

11. Maker of SteeL kitchen products OXO
The OXO line of kitchen utensils is designed to be ergonomically superior to the average kitchen too. The intended user of OXO products is someone who doesn’t have the normal range of motion or strength in the hands e.g. someone suffering from arthritis.

13. Free West Coast daily EXAMINER
“The San Francisco Examiner” is a free newspaper that is distributed for free around the Bay Area. The paper was launched in 1863 as the “Democratic Press”, which was opposed to the positions held by President Abraham Lincoln. Two years later, the newspaper’s offices were destroyed by a mob on hearing of the president’s assassination. The paper started up publication again a few month’s later as the “Daily Examiner”.

21. Pound sound BAY
Baying is a deep and prolonged howling, as of a dog.

25. Leek relative CHIVE
Chives are the smallest species of edible onion, and a favorite of mine.

The leek is a national emblem of Wales (along with the daffodil), although I don’t think we know for sure how this came to be. One story is that the Welsh were ordered to wear leeks in their helmets to identify themselves in a battle against the Saxons. Apparently, the battle took place in a field of leeks.

27. Sacks of diamonds? BASES
The bases on a baseball diamond are referred to as “sacks”.

30. Risqué JUICY
“Risqué” is a French word, the past participle of the verb “to risk”. So in English we use “risqué” to mean “racy”, but in French it means “risky”.

31. Seat of Peru’s Constitutional Court AREQUIPA
Arequipa is located in the south of Peru and is the second-most populous city in the country, after the capital Lima. Arequipa has been the center of many uprisings since the city was founded in 1540, and was declared the nation’s capital on two occasions, in 1835 and in 1883.

33. Repeated musical pattern OSTINATO
In music, an ostinato is a piece of melody or a rhythmic pattern that frequently recurs in a piece. A favorite work in the classical repertoire that makes particular use of the ostinato form is Ravel’s “Bolero”.

34. 1994 film about a scandal QUIZ SHOW
“Twenty One” (note the lack of a hyphen) is a TV game show from the fifties. Famously, it was discovered that “Twenty One” was a rigged game, with the audience favorite Charles Van Doren (and others) being fed the answers ahead of time. The whole scandal was the inspiration for the 1994 movie “Quiz Show” in which Ralph Fiennes played Van Doren.

38. Calendario entry DIA
In Spanish we look at a day (dia) on the calendar (calendario).

44. Tale of a whitetail BAMBI
The 1942 Disney classic “Bambi” is based on an Austrian novel written by Felix Salten called “Bambi, A Life in the Woods”. In the original novel, Bambi is a roe deer. Walt Disney changed the species to a white-tailed deer as roe deer were unfamiliar to an American audience. There is a documented phenomenon known as the Bambi Effect, whereby people become more interested in animal rights after having watched the scene where Bambi’s mother is shot by hunters.

49. Douglas __ FIR
Various species of Douglas fir are native to North and Central America, and to Asia. The tree gets its name from the Scottish botanist David Douglas, who introduced the species into Europe.

51. Labor gp. that initially supported FDR CIO
John L. Lewis, founder of the Congress of Industrial Organizations (CIO), supported Democratic presidential candidate Franklin D. Roosevelt (FDR) and helped him win the White House for two terms. By the time the 1940 election came around, Lewis took the position that President Roosevelt was not doing enough to support labor unions and so threatened to resign should FDR be re-elected. FDR won a third term in office, and Lewis stepped down as president of the CIO.