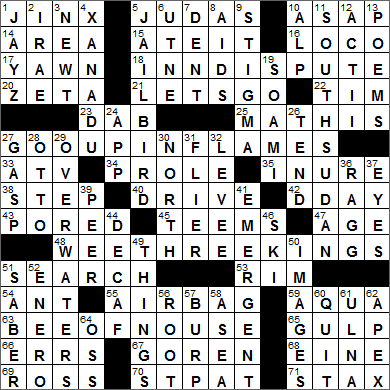 CROSSWORD SETTER: Jim Quinlan
THEME: A Doubled Letter … each of the themed answers is a common phrase that starts with a two-letter word, but the second letter of that word has been repeated to give us a three-letter word instead:

18A. Quibble about accommodations? INN DISPUTE (from “in dispute”)
27A. Marshmallow that’s been toasted too long? GOO UP IN FLAMES (from “go up in flames”)
48A. Small group of tiny monarchs? WEE THREE KINGS (from “We Three Kings”)
63A. Worthless buzzer? BEE OF NO USE (from “be of no use”)

Today’s Wiki-est, Amazonian Googlies
Across
1. Spell JINX
A jinx is a charm or a spell, and the word “jinx” comes from an older word “jyng” from the 17th-century. A “jyng” was another word for the wryneck, a type of bird much used in witchcraft.

5. Traitor JUDAS
A “judas” is a treacherous person, and a term derived from the disciple named Judas Iscariot. Judas was paid thirty pieces of silver to identify Jesus so that he could be arrested. He did so with a kiss, at which point he was taken by the soldiers of the High Priest Caiaphas and handed over to Pontius Pilate, the prefect of the Roman province of Judea.

10. Letters causing a rush ASAP
As soon as possible (ASAP)

16. Bonkers LOCO
In Spanish, if one isn’t sane (sano) one might be described as crazy (loco).

20. Zeus’ beginning? ZETA
One might surmise that the word “Zeus” starts with the Greek letter zeta.

In Greek mythology, Zeus was the ruler of the gods of Mount Olympus. He was also the god of the sky and thunder. The Roman equivalent of Zeus was Jupiter.

22. Director Burton TIM
Movie director and producer Tim Burton makes my least favorite types of movie: dark, gothic, horror fantasies. The list of his titles includes “Edward Scissorhands”, “Sleepy Hollow”, “Sweeney Todd”, “Charlie and the Chocolate Factory” and “Alice in Wonderland”. Also included in each of these movies is Johnny Depp in a starring role, as Depp and Burton are good friends and frequent collaborators. Another frequent star in Burton movies is English actress Helena Bonham Carter, who has been his domestic partner since 2001.

25. “Too Much, Too Little, Too Late” duettist MATHIS
Johnny Mathis had to face a tough choice in 1956. Mathis was a talented high jumper in college and was invited to try out for the US Olympic team destined for the Melbourne Games. At the same time he was scheduled to make his first recordings, in New York. Mathis opted to go to the Big Apple.

“Too Much, Too Little, Too Late” was a hit duet released in 1978 by Johnny Mathis and Deniece Williams. It was a comeback song for Johnny Mathis to some extent, as it was his first chart topper in over two decades.

27. Marshmallow that’s been toasted too long? GOO UP IN FLAMES (from “go up in flames”)
Marshmallow was originally made from a paste from the root of the mallow plant. The mallow plant grows near salt marshes, and is sometimes called the “marsh mallow”. Hence the name of the confection. Unexpected, but interesting …

34. “1984” worker PROLE
George Orwell introduced us to the “proles”, the working class folk in his famous novel “Nineteen Eighty-Four”. Collectively, the proles make up the section of society known as the proletariat.

48. Small group of tiny monarchs? WEE THREE KINGS (from “We Three Kings”)
The Christmas carol “We Three Kings” is a favorite of mine. The carol was written in 1857 by the rector of an Episcopal church in Williamsport, Pennsylvania called John Henry Hopkins, Jr. Hopkins composed “We Three Kings” for a Christmas pageant in New York City.

51. Google, say SEARCH
The search engine “Google” was originally called “BackRub” would you believe? The name was eventually changed to Google, an intentional misspelling of the word “googol”. A googol is a pretty big number, 10 to the power of 100. That would be the digit 1 followed by 100 zeros.

54. “A Bug’s Life” extra ANT
“A Bug’s Life” is a 1998 animated feature film from Pixar. The storyline is based on the film “The Seven Samurai” and the fable of “The Ant and the Grasshopper”.

67. Bridge expert on some “Sports Illustrated” covers GOREN
Charles Goren was a world champion bridge player from Philadelphia. Goren published many books on the subject, and had a daily bridge column that appeared in almost 200 newspapers. He even had a weekly column in “Sports Illustrated”. Goren introduced several techniques and systems that eventually became part of the modern Standard American bidding system that is used by many bridge players today (including me!).

68. Mozart’s “a” EINE
“Eine” is the German indefinite article, used with feminine nouns.

69. Soft-spoken painter Bob ROSS
Bob Ross was an artist and art instructor. Ross created and appeared in the long-running PBS show “The Joy of Painting”, a show which provided instructions for budding artists.

70. Irish hero, briefly ST PAT
There is a fair amount known about St. Patrick, some of which comes from two letters written in his own hand. St. Patrick lived in the fifth century, but was not born in Ireland. He was first brought to Ireland at about 16 years of age from his native Britain, by Irish raiders who made him a slave for six years. Patrick managed to escape and returned to his homeland where he studied and entered the Church. He went back to Ireland as a bishop and a missionary and there lived out the rest of his life. There seems to be good evidence that he died on March 17th (now celebrated annually as St. Patrick’s Day), although the year is less clear. The stories about shamrock and snakes, I am afraid they are the stuff of legend.

71. Pringles competitor STAX
Stax is a brand name of potato snack made by Lay’s. Stax are similar to its famous competitor, Pringles.

Down
1. Now hyphen-less rapper JAY Z
Jay Z, as well as being a successful and very rich rap artist, is married to singer Beyonce.

2. “Dies __” IRAE
“Dies Irae” is Latin for “Day of Wrath”. It is the name of a famous melody in Gregorian Chant, one that is often used as part of the Roman Catholic Requiem Mass.

4. Film estate with a championship golf course XANADU
In the 1941 film “Citizen Kane”, the newspaper magnate Charles Foster Kane builds himself an immense and opulent estate on the Florida coast called Xanadu. Xanadu boasts a Venetian-style canal, complete with gondolas, and a well-stocked zoo. There is also a championship golf course. The estate was inspired by Hearst Castle, the California mansion owned by William Randolph Hearst.

6. __ Reader UTNE
The “Utne Reader” is known for aggregation and republishing of articles on politics, culture and the environment from other sources in the media. The “Utne Reader” was founded in 1984, with “Utne” being the family name of the couple that started the publication.

9. Stain STIGMA
A stigma (plural “stigmata), in a social sense, is a distinguishing mark of disgrace. For example, one might have to suffer the stigma of being in prison. The term derives from the Greek “stigma”, which was a mark or brand.

10. European attraction ALP
There are eight Alpine countries in total:

11. Independent country since 2011 SOUTH SUDAN
South Sudan is an African country that gained her independence in 2011, after a split with Sudan. Sadly, the new nation has been ravaged by a civil war since 2013.

12. When Hamlet says, “The play’s the thing … ” ACT II
In William Shakespeare’s “Hamlet”, the title character speaks the lines:

I’ll have grounds
More relative than this—the play’s the thing
Wherein I’ll catch the conscience of the King.

Prince Hamlet is trying to prove to himself that King Claudius murdered the former king, Hamlet’s father. He decides to insert a few lines about regicide into a play that is to be performed at court. The hope is that Claudius will react to the reference, hence convincing Hamlet of the new king’s guilt.

13. Dickinson output POEMS
On a roadtrip around the country a few years ago, my wife and I had a very disappointing stop in Amherst, Massachusetts intending to visit the old home of Emily Dickinson. We hadn’t done our homework and failed to note that the home was only open for tours on certain days of the week, and not the day we were there (so be warned!). Emily Dickinson wrote nearly 1800 poems in her lifetime, with less than a dozen published before she died in 1886. Emily’s younger sister discovered the enormous collection, and it was published in batches over the coming decades.

24. Trivia Crack, e.g. APP
Trivia Crack is a trivia game played on smartphones that was launched in 2013. The app was developed by a company in Buenos Aires and originally focused on a Latin American audience. Trivia Crack is now available in ten different languages, including English, and became the most downloaded game in Apple’s App Store in December 2014.

30. __ Star NORTH
Because the orientation of the Earth’s axis shifts, albeit very slowly, the position of north relative to the stars changes over time. The bright star that is closest to true north is Polaris, and so we call Polaris the North Star or Pole Star. 14,000 years ago, the nearest bright star to true north was Vega, and it will be so again in about 12,000 years time.

31. Circular FLIER
A fly sheet is a piece of paper on which information is printed, usually to be distributed. A fly sheet is also known as a “flier”.

32. Chevy’s “American Pie” destination LEVEE
In his iconic song “American Pie”, Don McLean “drove [his] Chevy to the levee, but the levee was dry”. These lines are reference to a series of TV commercials for Chevrolet in the fifties in which Dinah Shore sang the words:

Drive your Chevrolet through the USA,
America’s the greatest land of all.
On a highway or a road along a levee …
… life is completer in a Chevy.
So make a date today to see the USA
And see it in your Chevrolet.

44. Joe sans jolt DECAF
It seems that no one really knows why we refer to coffee as “joe”, but we’ve been doing so since early in WWII.

46. Take on moguls SKI
Moguls are the series of bumps in the surface of snow that arise naturally as a succession of skiers make turns on a slope.

64. ’40s spy org. OSS
The Office of Strategic Services (OSS) was formed during WWII in order to carry out espionage behind enemy lines. A few years after the end of the war the OSS functions were taken up by a new group, the Central Intelligence Agency that was chartered by the National Security Act of 1947.