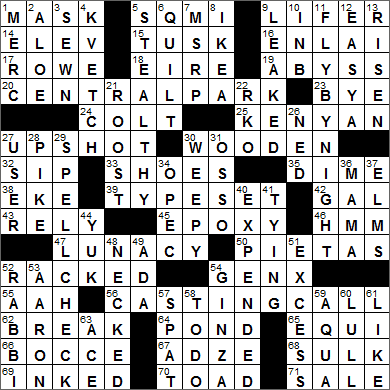 56A. Process for selecting theatrical performers, and a hint to the first word of the answers to starred clues CASTING CALL

Today’s Wiki-est, Amazonian Googlies
Across
1. Halloween costume part MASK
All Saints’ Day is November 1st each year. The day before All Saints’ Day is All Hallows Eve, better known by the Scottish term, “Halloween”.

15. Mammoth feature TUSK
A relatively well-preserved set of woolly mammoth remains were discovered in Siberia in 2012. The remains included some intact cells, and there is talk about the possibility of cloning the animal who died between 4,000 and 10,000 years ago. Scary stuff …

16. China’s Zhou __ ENLAI
Zhou Enlai (also Chou En-Lai) was the first government leader of the People’s Republic of China and held the office of Premier from 1949 until he died in 1976. Zhou Enlai ran the government for Communist Party Leader Mao Zedong, often striking a more conciliatory tone with the West than that of his boss. He was instrumental, for example, in setting up President Nixon’s famous visit to China in 1972. Zhou Enlai died just a few months before Mao Zedong, with both deaths leading to unrest and a dramatic change in political direction for the country.

17. “Dirty Jobs” host Mike ROWE
Mike Rowe is the host of the successful reality show called “Dirty Jobs” that is broadcast by “Discovery Channel”. Rowe is also a spokesperson for Ford Motor Company in a series of television commercials. He is quite the singer too, as he sang professionally with the Baltimore Opera for a while.

18. County Kerry’s isle EIRE
County Kerry is located in the southwest of Ireland. It is a popular tourist destination, largely because it is home to the town of Killarney, which is a jumping off point for the famous Ring of Kerry and the Lakes of Killarney. Kerry’s county town is Tralee, home to the world-famous Rose of Tralee festival.

20. *Manhattan site of Strawberry Fields CENTRAL PARK (giving “central casting”)
“Strawberry Fields” is a memorial in Central Park in New York City. The memorial is a triangular piece of land found directly across from the Dakota Apartments where Lennon lived and was murdered. At the center of the triangle of land is a circular pathway mosaic of stones with the word “Imagine” in the middle. Lennon’s wife, Yoko Ono, contributed over one million dollars to help pay for the memorial’s design and upkeep.

In the world of movies, central casting is the studio department that is responsible for hiring extras and actors needed for bit parts.

25. One from Nairobi KENYAN
Nairobi is the capital and largest city in the African nation of Kenya. The city is named for the Nairobi River, which in turn takes its name from the Maasai “Enkare Nairobi” meaning “Cool Water”. Nairobi was founded in 1899 as a stop on the Kenya-Uganda railroad, at a time when the country was a British colony.

33. Pumps or clogs SHOES
A pump is a woman’s shoe that doesn’t have a strap. Such shoes are probably called “pumps” because of the sound they make while walking in them.

Clogs are shoes that made either completely or partly from wood. The name comes from the 14th-century word “clogge” meaning “lump of wood”.

50. Michelangelo masterpieces PIETAS
The Pietà is a representation of the Virgin Mary holding in her arms the dead body of her son Jesus. The most famous Pietà is probably the sculpted rendition by Michelangelo which is located in St. Peter’s Basilica in Vatican City. In some depictions of Mary with Jesus in her arms, mother and son are surrounded by other figures from the New Testament. These depictions are known as “Lamentations”.

52. Tallied, with “up” RACKED
Back in the mid-1600s, a “tally” was a stick marked with notches that tracked how much one owed or paid. The term came from the Latin “talea” meaning “stick, rod”.

54. Group after boomers GEN-X
The term Generation X originated in the UK where it was the name of a book by Jane Deverson. Her book detailed the results of a study of British youths in 1964, contrasting their lifestyle to those of previous generations. It was Canadian author Douglas Coupland who was responsible for popularizing the term, with his more successful publication “Generation X: Tales for an Accelerated Culture”. By the latest accepted definition, Gen-Xers were born between 1961 and 1981.

64. Place for koi POND
Koi are also called Japanese carp. Koi have been bred for decorative purposes and there are now some very brightly colored examples found in Japanese water gardens.

66. Italian ball game BOCCE
The Italian bowling game of “bocce” (anglicized as “bocci”) is based on a game played in Ancient Rome. “Bocce” is the plural of the Italian word “boccia” meaning “bowl”.

67. Woodworking tool ADZE
An adze (also adz) is similar to an axe, but is different in that the blade of an adze is set at right angles to the tool’s shaft. An axe’s blade is set in line with the shaft.

70. Frog’s kiddie-lit friend TOAD
Frog and Toad are the principal characters in a series of illustrated books by Arnold Lobel that are written for young children who are learning to read. The books were adapted into a 2003 Broadway musical called “A Year with Frog and Toad”.

Down
1. Bygone Ford division, for short MERC
The Mercury brand of car was made by Ford from 1938 until 2011. Mercury was introduced by Henry Ford’s son Edsel Ford. Mercury vehicles were positioned as being more luxurious that the regular Ford models, and more economical than Ford’s high-end Lincoln models.

4. Complain KVETCH
The word “kvetch” comes to us from Yiddish, with “kvetshn” meaning “to complain” or “squeeze”.

8. Swedish furniture chain IKEA
The IKEA furniture stores use the colors blue and yellow for brand recognition. Blue and yellow are the national colors of Sweden, where IKEA was founded and is headquartered.

22. MGM rival RKO
The RKO Pictures studio was formed when RCA (RADIO Corporation of America) bought the KEITH-Albee-ORPHEUM theaters (and Joe Kennedy’s Film Booking Offices of America). The RKO acronym then comes from the words “Radio”, “Keith” and “Orpheum”.

26. Homer’s nice neighbor NED
Ned Flanders lives next door to Homer on TV’s “The Simpsons”. Ned is voiced by actor Harry Shearer and has been around since the very first episode aired in 1989.

28. High-speed highway PIKE
Back in the 15th century a “turnpike” was a defensive barrier across a road. By the 17th century the term was used for a barrier that stopped travellers until a toll was paid. By the 18th century a turnpike (sometimes “pike”) was the name given to a road with a toll.

34. Oil gp. with 12 member nations OPEC
The Organization of the Petroleum Exporting Countries (OPEC) was founded in 1960 at a conference held in Baghdad, Iraq that was attended by Iraq, Kuwait, Iran, Saudi Arabia and Venezuela. Nine more countries joined the alliance soon after, and OPEC set up headquarters in Geneva, Switzerland and then Vienna, Austria in 1965. The basic aim of OPEC was to wrench control of oil prices from the oil companies and to put it in the hands of the sovereign states that own the natural resource.

Aquafresh is a toothpaste that was introduced in 1973. The original product delivered two “stripes” from the tube: a white paste for cavity protection and an aqua gel for fresh breath. This “double protection” formula was augmented in 1983 to “triple protection” with the addition of a red gel for healthy gums.

52. Talmud expert RABBI
The Talmud is a collection of writings by thousands of rabbis and is a central text in Rabbinic Judaism, second only to the Torah.

53. Brother of Moses AARON
In the Bible and the Qur’an, Aaron was the older brother of Moses and was a prophet. Aaron became the first High Priest of the Israelites.

54. Tokyo shopping district GINZA
Ginza is a district in Tokyo that is noted for its western shops, especially the leading fashion stores.