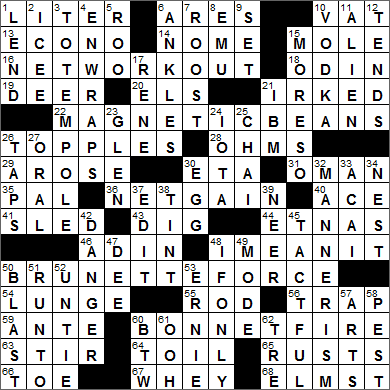 CROSSWORD SETTER: Melanie Miller
THEME: Net Gain … each of today’s themed answers is a common word or phrase, but with NET inserted:

36A. Taxable amount … and a hint to the four longest puzzle answers NET GAIN

Today’s Wiki-est, Amazonian Googlies
Across
1. Unit of volume LITER
On the other side of the Atlantic we use the French spelling for measurements that originated in French, so “metre” for “meter” and “litre” for “liter”.

6. One of the Twelve Olympians ARES
The Greek god Ares is often referred to as the Olympian god of warfare, but originally he was regarded as the god of blood-lust and slaughter. Ares united with Aphrodite to create several gods, including Phobos, Deimos and Eros. The Roman equivalent to Ares was Mars.

14. Bering Sea port NOME
Nome, Alaska has over 3,500 residents, the majority of whom are Native American. The next largest ethnic group in Nome is the white population. The origin of the name “Nome” isn’t well understood, it seems. One theory is that was a misunderstanding of the local Inupiaq word for the phrase “Where at?”

Vitus Bering was a Danish navigator who worked for the Russian Navy. He was the first European to discover Alaska, which he did in 1741. Bering died on the same voyage of discovery and was buried on the largest of the Commander Islands, now called Bering Island in his honor. He also gave his name to the Bering Sea and the Bering Strait.

15. Subterranean critter MOLE
One of the more commonly known facts about my native Ireland is that there are no snakes in the country. A less known fact is that there are no moles either. There are plenty of snakes and moles in Britain, just a few miles away. Over a pint we tend to give the credit to Saint Patrick, but the last ice age is more likely the responsible party …

18. Ruler of the Valkyries ODIN
In Norse mythology, the valkyries are beautiful female attendants of Odin who choose those who must die in battle and those who must live. Half of those who die go to Fólkvangr, the “army field” ruled over by the goddess Freyja. The other half of those who perish go to Valhalla, the hall of the slain that is ruled over by the god Odin. The etymology of “valkyrie” is Old Norse for “chooser of the slain”.

19. Venison source DEER
“Venison” is the meat of a deer. In days of yore, the term applied not just to deer, but to any large game. The word “venison” ultimately derives from the Latin “venare” meaning “to hunt”.

20. End of basketball? ELS
There are two letters L (els) at the end of the word “basketball”.

22. Attractive legumes? MAGNETIC BEANS (“net” + “magic beans”)
“Jack and the Beanstalk” is a fairy tale from England. In the story, young Jack sells the family cow for some magic beans. He plants the beans and a massive beanstalk grows up into the sky. At the top of the beanstalk there lives an ogre. Jack climbs the beanstalk and adventures ensue …

28. Omegas, to a physicist OHMS
The unit of electrical resistance is the ohm (with the symbol omega) named after German physicist Georg Simon Ohm. Ohm was the guy who established experimentally that the amount of current flowing through a circuit is directly proportional to the voltage applied, (V=IR) a relationship that every school kid knows as Ohm’s Law.

35. Chum PAL
A “chum” is a friend. The term originated in the late 1600s as an alternative spelling for “cham”. In turn “cham” was a shortened form of “chambermate”, a roommate at university.

44. Italian white wines ETNAS
Etna wines are made from grapes that are grown on the slopes of Mount Etna, the active volcano on the island of Sicily in Italy.

46. Deuce follower AD IN
In tennis, if the score reaches “deuce” (i.e. when both players have scored three points), then the first player to win two points in a row wins the game. The player who wins the point immediately after deuce is said to have the “advantage”. If the player with the advantage wins the next point then that’s two in a row and that player wins the game. If the person with the advantage loses the next point, then advantage is lost and the players return to deuce and try again. If the one of the players is calling out the score then if he/she has the advantage then that player announces “ad in” or more formally “advantage in”. If the score announcer’s opponent has the advantage, then the announcement is “ad out” or “advantage out”. Follow all of that …?

67. Cheese manufacturing byproduct WHEY
When milk curdles it separates into two parts, the solid curds and the liquid whey.

68. Wes Craven film locale: Abbr. ELM ST
“A Nightmare on Elm Street” is a Wes Craven slasher-horror film, released in 1984. As I don’t do “slasher” nor “horror”, I only learned relatively recently that Johnny Depp was in the movie, making his feature film debut.

Down
2. Arctic Blast maker ICEE
Icee and Slurpee are brand names of those slushy drinks. Ugh …

3. Tlingit feature of Seattle’s Pioneer Square TOTEM POLE
Pioneer Square in Seattle is a neighborhood that once was the heart of the city, the place where the city’s founders settled in 1852. In 1899, some businessmen stole a totem pole from the local Tlingit people and erected it in a park in Pioneer Square. The pole stood there until 1938 when it was destroyed by an arsonist. The Tlingit people were generous enough to carve a new one for the city, although Seattle had agreed to pay them for the one that had been stolen decades before.

5. Joey of fiction ROO
Like most of the characters in A. A. Milne’s “Winnie the Pooh”, the young kangaroo called Roo was inspired by a stuffed toy belonging to Milne’s son Christopher Robin.

“Joey” is the name given to all infant marsupials, not just kangaroos. No one really seems to know for sure what the etymology is of the term “joey”.

8. Grounded Aussie EMU
The emu has had a tough time in Australia since man settled there. There was even an “Emu War” in Western Australia in 1932 when migrating emus competed with livestock for water and food. Soldiers were sent in and used machine guns in an unsuccessful attempt to drive off the “invading force”. The emus were clever, breaking their usual formations and adopting guerrilla tactics, operating as smaller units. After 50 days of “war”, the military withdrew. Subsequent requests for military help for the farmers were ignored. The emus had emerged victorious …

10. Bloody Mary ingredient VODKA
The Bloody Mary is one of my favorite cocktails, perhaps because it seems to taste so differently depending on who makes it. It has numerous ingredients above and beyond the requisite vodka and tomato juice, and has been called “the world’s most complex cocktail”.

17. Russo who plays Frigga in “Thor” RENE
The lovely and very talented actress Rene Russo is a native of Burbank, California. Russo went to highschool (with actor/director Ron Howard), but dropped out in tenth grade. At seventeen, she was given the opportunity to train as a model and within a very short time appeared on the cover of “Vogue”. As her modelling jobs slowed down in her early thirties, Russo made a career change and studied theater and acting. I am so glad she did, as Rene Russo is one of my favorite actresses …

The 2011 movie “Thor” is yet another film based on a comic book hero. Even though I won’t be seeing it (I don’t do comics), I must admit it does have an impressive cast. Chris Hemsworth plays Thor, supported by Natalie Portman, Rene Russo and Anthony Hopkins. And to crown it all, Kenneth Branagh is the director.

21. Lenovo acquired its PC business in 2005 IBM
Lenovo is a Chinese manufacturer of computers. The company is very successful, and sold more personal computers in 2013 than any other vendor worldwide.

24. Smidgen IOTA
Iota is the ninth letter in the Greek alphabet. We use the word “iota” to portray something very small as it is the smallest of all Greek letters.

25. Beverage flavored with cinnamon and cardamom CHAI
Masala chai is a drink made from spiced black tea, spices, a sweetener, and milk. “Chai” is the the Hindi word for “tea”. We often called tea “a cup of char” growing up in Ireland with “char” being our slang word for tea, derived from “chai”.

30. Person, slangily EGG
She’s “a good egg”, for example, an informal use of the word …

33. Popular palm fruit ACAI
Açaí is a palm tree native to Central and South America. The fruit has become very popular in recent years and its juice is a very fashionable addition to juice mixes and smoothies.

34. Hornet hangout NEST
A hornet is a large type of wasp, with some species reaching over two inches in length.

Lady Macbeth is an evil and treacherous woman in William Shakespeare’s “Macbeth”. The most famous line uttered by Lady Macbeth has to be “Out, damned spot! Out, I say!” In this line, Lady Macbeth is frantically rubbing at her hand trying to get rid of an imaginary bloodstain left there after she committed four murders.

47. Welsh/English border river DEE
There are several rivers in the UK called the Dee. The River Dee flowing through parts of Wales and England is probably the most significant as it serves as part of the border between the two countries.

52. Remove, as a cravat UNTIE
The cravat originated in Croatia and was an accessory used with a military uniform. Cravats were introduced to the fashion-conscious French by Croatian mercenaries enlisted into a regiment of the French army. The English placed a lot of emphasis on the knot used for the cravat, and in the period after the Battle of Waterloo the cravat came to be known as a “tie”. What we now call a tie in English is still called a “cravate” in French.

53. Bath-loving Muppet ERNIE
I’ve always believed that the “Sesame Street” characters Bert and Ernie were named after two roles played in the Christmas classic “It’s a Wonderful Life”. In the movie, the policeman’s name is Bert and his taxi-driving buddy is named Ernie. However, the “Sesame Street” folks have stated that the use of the same names is just a coincidence.

57. Culinary pursuits ARTS
Our word “culinary” means “of the kitchen, of food”. The term derives from the Latin “culina” meaning “kitchen, food”. As an aside, “culina” is also the source of our word “kiln”.

62. “I __ Piccoli Porcellini” TRE
“I tre piccoli porcellini” is Italian for “The Three Little Pigs”.
The fairy tale of “The Three Little Pigs” has been around for centuries, although it first appeared in print in the 1840s. One little pig built a house using straw and another built one using wood. The cleverest little pig built its house using bricks.