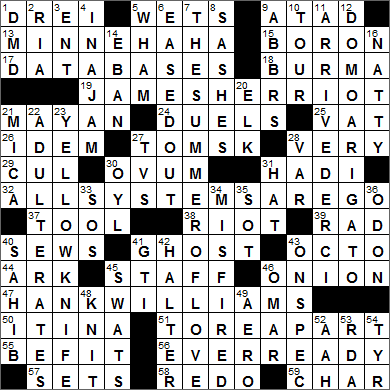 Today’s Wiki-est, Amazonian Googlies
Across
1. Crowd in Berlin? DREI
In German, two (zwei) is company, and three (drei) is a crowd.

13. “Handsomest of all the women,” in an 1855 epic MINNEHAHA
Minnehaha is a character featured in “The Song of Hiawatha”, the epic poem by Henry Wadsworth Longfellow, published in 1855. The name Minnehaha translates in the Dakota language into “waterfall” or “rapid water”, and not into “laughing water” as is oft-quoted (directly from poem).

In the land of the Dacotahs
Lives the Arrow-maker’s daughter,
Minnehaha, Laughing Water,
Handsomest of all the women.
I will bring her to your wigwam,
She shall run upon your errands,
Be your starlight, moonlight, firelight,
Be the sunlight of my people!

15. What a “B” may mean BORON
Boron is the chemical element with the atomic number 5 and symbol B. It lies over to the right in Group 13 of the Periodic Table of the Elements. Uncombined, elemental boron is not found naturally on Earth. The boron that is mined is found in oxide form, not as uncombined boron.

17. Modern mining targets DATABASES
The process of data mining is used to extract information from a database and present it in a form that facilitates further use.

19. “Let Sleeping Vets Lie” author JAMES HERRIOT
James Herriot was the pen name of British veterinarian and author Alf Wight. Herriot wrote an incredibly successful semi-autobiographical series of books called “All Creatures Great and Small”. I must admit to walking surreptitiously past the authors veterinary office in the Yorkshire town of Thirsk while my wife and I were on our honeymoon back in the eighties, hoping to catch a glimpse of the man. No luck, although we did get the inside scoop on the characters in the books from the lady running the B&B where we stayed, over a cup of tea. An enjoyable bit of gossip …

21. Like the ruins of Chichén Itzá MAYAN
Chichén Itzá is a Mayan ruin located in the Mexican state of Yucatán. It is the second most visited archaeological site in the country (after the ancient city of Teotihuacan). Chichén Itzá has seen a surge in the number of visitors since the development of nearby Cancún as a tourist destination.

26. Bibliography note IDEM
Idem is usually abbreviated as “id.” and is the Latin word for “the same”. In research papers idem is used in a list of references, in place of citations “already mentioned above”.

27. 410-year-old Siberian city TOMSK
Tomsk is one of the oldest towns in Siberia, having been founded in 1604. The city gets its name from the Tom River on which it is situated.

29. __ de canard: duck feathers used to tie fishing flies CUL
“Cul de canard” are feathers taken from the rear end of a duck. They are used in fly fishing as they are especially buoyant due to the presence of an oil secreted by the duck’s oil gland. “Cul de canard” might be translated as “duck’s bottom”, although that’s the “polite” translation.

41. 1990 film that featured “Unchained Melody” on its soundtrack GHOST
The fabulous film “Ghost” was the highest-grossing movie at the box office in 1990, bringing in over $500 million, despite only costing $21 million to make. Stars of the film are Patrick Swayze, Demi Moore and Whoopi Goldberg. You might want to check out the stage musical adaptation “Ghost The Musical”, which debuted in 2011 and might still be touring the UK and US.

The lovely song “Unchained Melody” was a huge hit for the Righteous Brothers in 1965. The song was written a decade earlier in 1955 by Alex North and By Zaret as a theme for a prison film called “Unchained”, which explains the title of the tune. The song got a new lease of life in 1990 when it was used in a very sexy scene in the film “Ghost”.

44. Genesis 6 creation ARK
The term “ark”, when used with reference to Noah, is a translation of the Hebrew word “tebah”. The word “tebah” is also used in the Bible for the basket in which Moses was placed by his mother when she floated him down the Nile. It seems that the word “tebah” doesn’t mean “boat” and nor does it mean “basket”. Rather, a more appropriate translation is “life-preserver” or “life-saver”. So, Noah’s ark was Noah’s life-preserver during the flood.

From the King James version of the Bible, Genesis 6:14 …
Make thee an ark of gopher wood; rooms shalt thou make in the ark, and shalt pitch it within and without with pitch.

The Lord is my shepherd, I lack nothing.
He makes me lie down in green pastures,
he leads me beside quiet waters,
he refreshes my soul.
He guides me along the right paths for his name’s sake.
Even though I walk through the darkest valley,
I will fear no evil,
for you are with me;
your rod and your staff,
they comfort me.

47. Subject of the biopic “I Saw the Light” HANK WILLIAMS
“I Saw the Light” is a biographical film about country singer legend Hank Williams that is scheduled to release in 2015. Williams is played by English actor Tom Hiddleston. The movie’s title comes from a 1948 country gospel song written by Williams that he often used to close his shows.

50. Autobiography whose first chapter is “Nut Bush” I, TINA
“I, Tina” is the 1986 autobiography of Tina Turner. The book was so successful it was adapted into a movie called “What’s Love Got to Do With It?” The film version was released in 1993 and starring Angela Bassett as Tina Turner. The first chapter of the biography is called “Nut Bush”, a reference to the small farming community of Nutbush, Tennessee where Turner was born (as Anna Mae Bullock).

An endoscope is an instrument used to make a visual examination of the inside of an organ or a cavity of the body.

5. ’80s pop duo with an exclamation point in its name WHAM!
I just found out that the eighties pop duo that we knew on the other side of the Atlantic as “Wham!” were better known as “Wham! UK” in North America. Apparently there already was a band called Wham! here in the US. Wham! UK was composed of singers George Michael and Andrew Ridgeley. George Michael made it big as a solo artist after the pair broke up, but Ridgeley kind of faded into obscurity, relatively speaking.

7. Hippie phenomenon THE SUMMER OF LOVE
The “Summer of Love” was a gathering of about 100,000 hippies in the Haight-Ashbury district of San Francisco in the summer of 1967. The gathering was heralded by a “Human Be-In” in Golden Gate Park in the middle of January, which attracted 30,000 people. The Summer of Love ended as many students went back to school, and was marked with a mock funeral called “The Death of the Hippie” that was held in early October.

12. Overseas thanks DOMO ARIGATO
“Domo arigato” is Japanese for “thank you very much”.

14. South African-born Middle East diplomat EBAN
Abba Eban was an Israeli diplomat and politician, born Aubrey Solomon Meir Eban in Cape Town, South Africa. While working at the United Nations after WWII, Eban changed his given name to “Abba”, the Hebrew word for “father”. He made this change as reportedly as he could see himself as the father of the nation of Israel.

16. Smart NATTY
A natty dresser is one who dresses smartly and neatly.

21. Mineral whose name is Latin for “crumb” MICA
Mica is a mineral, a sheet silicate. Thin sheets of mica are transparent and are used in place of glass in certain applications. This form of mica is called isinglass, and as it has a better thermal performance than glass it is a great choice for “peepholes’ in boilers and lanterns. Mica is also used in the electronics industry, making use of its unique electrical and thermal insulating properties.

23. Canadian territorial capital YELLOWKNIFE
Yellowknife is the capital city of Canada’s Northwest Territories. The city is located on the north shore of Great Slave Lake, and lies just 250 miles south of the Arctic Circle. The city was named for the Yellowknives Dene aboriginal people who traded tools made from local copper deposits. The tools were “yellow” in color, hence the name.

30. Thimble Theatre name OYL
“Thimble Theater” was the precursor comic strip to the famous “Popeye” drawn by E. C. Segar. Before Popeye came into the story, the brother and sister characters Castor Oyl and Olive Oyl were the main protagonists. And then along comes a sailor …

33. Desperate letters SOS
The combination of three dots – three dashes – three dots, is a Morse signal first introduced by the German government as a standard distress call in 1905. The sequence is remembered as the letters SOS (three dots – pause – three dashes – pause – three dots), although in the emergency signal there is no pause between the dots and dashes, so SOS is in effect only a mnemonic. Similarly, the phrases “Save Our Souls” and “Save Our Ship” are also mnemonics, introduced after the “SOS” signal was adopted.

40. Indian title SAHIB
“Sahib” is most recognized as a term of address in India, where it is used in much the same way as we use “mister” in English. The term was also used to address male Europeans in the days of the British Raj. The correct female form of address is “sahiba”, but in the colonial days the address used was “memsahib”, a melding of “ma’am” and “sahib”

41. Sporty Golf GTI
The Volkswagen Rabbit is a small, front-wheel drive car that is sold as the Volkswagen Golf outside of North America.

42. Bikini option HALTER
The origin of the name “bikini”, a type of bathing suit, seems very uncertain. My favorite story is that it is named after the Bikini Atoll, site of American A-bomb tests in the forties and fifties. The name “bikini” was chosen for the swim-wear because of the “explosive” effect it had on men who saw a woman wearing the garment!

43. How much freelance work is done ON SPEC
The term “free lance” was coined by Sir Walter Scott in his 1820 novel “Ivanhoe”, using it to describe a medieval mercenary warrior. Forty years later, a freelancer was a journalist who did work for more than one publication without a long-term commitment.

49. Sol lead-in AERO-
Strictly speaking, the term “aerosol” defines a suspension of either liquid droplets or solid particles in a gas. A good example of an aerosol is smoke. We tend to use the “aerosol” to describe what comes out of a spray can, even though the liquid droplets usually fall out of the gas and don’t say suspended.

54. One-handed Norse god TYR
Týr is the Norse god of single combat, victory and heroic glory. According to legend, Týr showed great courage when he and his fellow gods were attempting to shackle the wolf monster called Fenrir. The wolf was tricked into accepting bindings that were actually magical ribbons of great strength. Fenrir submitted to the bonds because Týr agreed to place his hand in the wolf’s mouth, as a gesture of assurance that the ribbon was harmless. When Fenrir recognized the deceit, he bit of Týr’s hand. As a result, the god Týr is almost always depicted with only one hand.