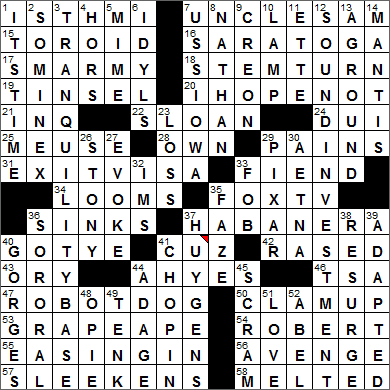 Today’s Wiki-est, Amazonian Googlies
Across
1. Strips near the water ISTHMI
The word “isthmus” (plural “isthmi”) comes the Greek word for “neck”. An isthmus is a narrow strip of land that usually connects two large land masses. The most notable examples of the formation are the Isthmus of Corinth in the Greek peninsula, and the Isthmus of Panama, connecting North and South America.

7. One giving you a pointer? UNCLE SAM
The famous “I want YOU for US Army” poster dates back to 1917. It depicts Uncle Sam pointing to the viewer, encouraging young men to report to the nearest recruiting station. The poster was designed by J. M. Flagg and is based on the similar British poster showing Lord Kitchener that was first issued three years earlier.

15. Tire tube, e.g. TOROID
A torus (plural “tori”) is a shape resembling a doughnut or a tire tube.

17. Sycophantic SMARMY
A sycophant is a selfish person, one who flatters. The term comes from the Greek “sykophantes” which originally meant “one who shows the fig”. This phrase described a vulgar gesture made with the thumb and two fingers.

19. Strands in a tree TINSEL
The custom of decorating trees at Christmas seems to have originated in Renaissance Germany. Those first trees were placed in guildhalls and were decorated with sweets and candy for the apprentices and children. After the Protestant Reformation, the Christmas tree became an alternative in Protestant homes for the Roman Catholic Christmas cribs. The Christmas tree tradition was imported into Britain by the royal family because of its German heritage. That tradition spread from Britain into North America.

22. Jerry who was head coach of the Utah Jazz for 23 seasons SLOAN
Jerry Sloan is a former NBA player and head coach. He is the only coach in NBA history to reach 1,000 wins with the same club, and that team was the Utah Jazz.

24. Over the limit, on the rd. DUI
In some states, there is no longer a legal difference between a DWI (Driving While Intoxicated) and a DUI (Driving Under the Influence). Other states retain that difference, so that by definition a DUI is a lesser offence than a DWI.

25. Verdun’s river MEUSE
The Meuse is a 575-mile long river that rises in France and flows through Belgium and the Netherlands before draining into the North Sea. The river is known as the Mouze in Belgium, and the Maas in the Netherlands.

Verdun-sur-Meuse is a city in northeastern France. The WWI Battle of Verdun took place just north of the city, and lasted for almost the whole of the year 1916. The battle was fought between the French and Germans, with loss of life being about equal between the two factions, the total death toll being about 700,000 men. The Battle of Verdun was primarily an artillery engagement, and some of those overlapping artillery craters are still visible today.

31. What one might need to leave EXIT VISA
A visa is a usually a stamp in one’s passport, an indication that one is authorized to enter a particular country. The word “visa” comes into English, via French, from the Latin expression “charta visa” meaning “paper that has been seen”, or “verified paper”.

33. Buff FIEND
A “buff”, “fiend” or a “nut” is one who is extremely enthusiastic and knowledgeable about a subject.

34. Shuttle sites LOOMS
When weaving with a loom, a shuttle is a tool that carries the thread across the weft yarn, back and forth so that the fabric “grows”.

35. “The Simpsons” shower FOX TV
“The Simpsons” is one of the most successful programs produced by the Fox Broadcasting Company. Homer Simpson’s catchphrase is “D’oh!”, which is such a famous exclamation that it has been included in the Oxford English Dictionary (OED) since 2001.

37. Cuban genre also called the “contradanza” HABANERA
The dance that we call the “habanera” is known as the contradanza in Cuba where it originated. The habanera gained popularity in the 19th century and was the first dance from Cuba to become successful internationally. The name “habanera” is Spanish for “of Havana”.

“Flat” is a word more commonly used in the British Isles than here. A flat is basically an apartment or condominium. The word “flat” is Scottish in origin, in which language it meant a “floor in a house”.

43. Kid with a trombone ORY
Kid Ory was a bandleader and jazz trombonist. At the beginning of the 20th century Ory’s New Orleans band included a young cornet player called … Louis Armstrong.

46. ID checker TSA
The Transportation Security Administration (TSA) was created in 2001, soon after the 9/11 attacks. TSA personnel carry out the baggage and body searches at US airports.

53. Pal of Beegle Beagle GRAPE APE
“The Great Grape Ape Show” was a cartoon from Hanna-Barbera that originally aired on Saturday mornings in the seventies.

54. ’60s defense secretary McNamara ROBERT
Robert McNamara served as Secretary of Defense in the sixties, in the Kennedy and Johnson administrations. McNamara’s name is inextricably linked with the Vietnam War, and specifically with the escalation of the US’s military involvement.

Down
2. ZzzQuil alternative SOMINEX
ZzzQuil, Benadryl, Unisom and Sominex are all brand names for the antihistamine diphenhydramine, which also has sedative properties.

3. Eagle touchdown site TRANQUILITY BASE
We always seem to remember the phrase “The Eagle has landed”, historic words spoken by Neil Armstrong when he put down Apollo 11’s Lunar Excursion Module on the surface of the moon. Looking back I have to say that the words preceding “The Eagle has landed” seem to have even more impact. During the descent to the moon’s surface Armstrong used the call sign “Eagle”, indicating that he was communicating from the LEM. After he killed the engines on touching down, Armstrong’s first words home to Earth were “Houston, Tranquility Base here. The Eagle has landed.” That switch of call sign from “Eagle” to “Tranquility Base” always sends shivers down my spine …

6. Theocritus works IDYLS
An “idyll” (also “idyl”) is a short poem with a pastoral theme, usually depicting the scene in romantic and idealized terms. The word comes from the Greek “eidyllion”, which literally translates to “little picture” but was a word describing a short, poem with a rustic theme.

Theocritus was an ancient Greek poet from Sicily who is remembered especially for his bucolic works, works set in the countryside.

7. It carried FDR to a 1943 “Big Three” meeting USS IOWA
The USS Iowa that saw action in WWII was the fourth ship to be so called by the US Navy. Among her many missions, the Iowa carried President Franklin D. Roosevelt to Casablanca in 1943 for one of the famed war summits with Winston Churchill and Josef Stalin. Today we can visit the Iowa at the Port of Los Angeles, as it is now a floating museum.

8. Lane on Broadway NATHAN
Nathan Lane is a wonderful actor, perhaps most associated with musical theater. Famous roles include Albert in “The Birdcage” and Max in “The Producers”. Best of all though to me, is Lane’s performance in the 1996 film “The Birdcage”.

9. Theban ruler in “Antigone” CREON
“Antigone” is a tragedy written by Greek playwright Sophocles and first performed in 442 BC. Antigone is the daughter of King Oedipus of Thebes, born out of the incestuous relationship with his mother Jocasta.

14. Short prayer? MANTIS
The term “praying mantis” is often used for species of insects more correctly called simply “mantises”. The familiar term refers to the prayer-like posture adopted by the insect with their fore-limbs folded. Strangely, the praying mantis is the only animal that we know with only one ear. That ear is located deep in the thorax or chest.

29. “Cars” studio PIXAR
“Cars” is a 2006 animated feature from Pixar. The great cast of voice actors includes Paul Newman in his last movie role before he passed away in 2008.

30. “Building a healthier world” sloganeer AETNA
When the health care management and insurance company known as Aetna was founded, the name was chosen to evoke images of Mt. Etna, the European volcano.

32. Virtual chats IMS
Even though instant messaging (sending IMs) has been around since the 1960s, it was AOL who popularized the term “instant message” in the eighties and nineties.

33. Time keeper? FOB
A fob is attached to another object to make access to it easier. And so a key fob is a chain attached to a key so that it can be retrieved easily. There are also watch fobs, and the pocket in a vest in which a watch can be placed is called a fob. In fact, the original use of the term “fob” was for a small pocket in which one could carry valuables.

41. Most of his works were for solo piano CHOPIN
Frédéric Chopin was a Polish composer who spent most of his life in France. He was most famous for his piano works in the Romantic style. Chopin was a sickly man and died quite young, at 39. For many of his final years he had a celebrated and tempestuous relationship with the French author George Sand (the nom de plume of the Baroness Dudevant). Those years with Sand may have been turbulent, but they were very productive in terms of musical composition.

48. Tyke of vintage TV OPIE
Opie Taylor is the character played by Ron Howard on “The Andy Griffith Show”. Opie lives with widowed father Andy Taylor (played by Andy Griffith) and his great-aunt Beatrice “Aunt Bee” Taylor (played by Frances Bavier. Ron Howard first played the role in 1960 in the pilot show, when he was just 5 years old. Howard sure has come a long way since playing Opie Taylor. He has directed some fabulous movies including favorites of mine like “Apollo 13”, “A Beautiful Mind” and “The Da Vinci Code”.

51. “A temporary insanity curable by marriage,” per Ambrose Bierce LOVE
Ambrose Bierce was, among other things, an American satirist. He wrote a satirical lexicon called “The Devil’s Dictionary” published in 1911. The book is still popular today, with an updated version released in 2009. It includes “new” definitions from Bierce that were not included in his original work. Roy Morris, Jr. wrote a biography about Bierce called “Ambrose Bierce: Alone in Bad Company”.

52. Explorer Tasman ABEL
Tasmania is the large island lying off the southeast coast of Australia. The Dutch explorer Abel Tasman was the first European to sail past the island, in 1642. Tasman named his discovery Van Dieman’s Land after the Governor of the Dutch East Indies, Anthony van Dieman. The name was officially changed to Tasmania, after the discoverer himself, in 1856. In Australia a more familiar name used is “Tassie”.

For the sake of completion, here is a full listing of all the answers:
Across
1. Strips near the water ISTHMI
7. One giving you a pointer? UNCLE SAM
15. Tire tube, e.g. TOROID
16. New York racing venue SARATOGA
17. Sycophantic SMARMY
18. Skiing maneuver STEM TURN
19. Strands in a tree TINSEL
20. Wincing words I HOPE NOT
21. Ques. INQ
22. Jerry who was head coach of the Utah Jazz for 23 seasons SLOAN
24. Over the limit, on the rd. DUI
25. Verdun’s river MEUSE
28. Dominate, in slang OWN
29. Mighty efforts PAINS
31. What one might need to leave EXIT VISA
33. Buff FIEND
34. Shuttle sites LOOMS
35. “The Simpsons” shower FOX TV
36. Drops SINKS
37. Cuban genre also called the “contradanza” HABANERA
40. Belgian-born artist with the 2012 Grammy-winning album “Making Mirrors” GOTYE
41. Slangy “No reason” CUZ
42. Flattened, as a flat RASED
43. Kid with a trombone ORY
44. Start of a wistful remark AH YES
46. ID checker TSA
47. Tiger Electronics’ Poo-Chi, for one ROBOT DOG
50. Give nothing away CLAM UP
53. Pal of Beegle Beagle GRAPE APE
54. ’60s defense secretary McNamara ROBERT
55. Entering with care EASING IN
56. Right, in a way AVENGE
57. Smooths SLEEKENS
58. Liquidated? MELTED