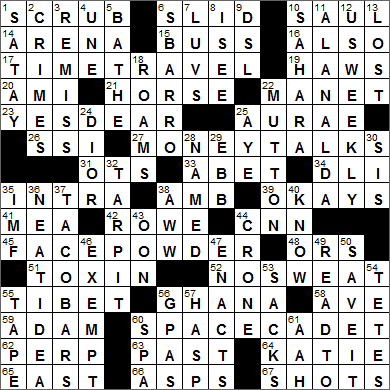 CROSSWORD SETTER: C.C. Burnikel
THEME: Save It … each of today’s themed answers starts with something that we can SAVE:

17A. “Back to the Future” subject TIME TRAVEL (giving “save time”)
27A. “Cash makes things happen” MONEY TALKS (giving “save money”)
45A. Cosmetic applied after foundation FACE POWDER (giving “save face”)
60A. Ditzy one SPACE CADET (giving “save space”)

Today’s Wiki-est, Amazonian Googlies
Across
1. Use an S.O.S pad SCRUB
S.O.S is a brand name of scouring pads made from steel wool impregnated with soap. The product was invented as a giveaway by an aluminum pot salesman in San Francisco called Ed Cox. His wife gave it the name “S.O.S” as an acronym for “Save Our Saucepans”. Note the punctuation! There is no period after the last S, and that is deliberate. When Cox went to register the trademark, he found that “S.O.S.” could not be a trademark because it was used as an international distress signal. So he dropped the period after the last S, and I hope made a lot of money for himself and his wife.

17. “Back to the Future” subject TIME TRAVEL (giving “save time”)
In the fun 1985 movie “Back to the Future”, Marty McFly finds himself back in 1955, and is trying to get BACK to his FUTURE, which is 1985. But on the other hand, 1985 is really Marty’s present, before he went back in time. Why does time travel have to be so complicated …

22. Impressionist Édouard MANET
Édouard Manet was a French painter whose works are mainly classified as Realist. Manet was friends with Impressionists masters like Edgar Degas, Claude Monet and Pierre-Auguste Renoir and greatly influenced the Impressionist movement. The list of Manet’s marvelous paintings includes “Le Déjeuner sur l’Herbe”, “Le Repose” and “A Bar at the Folies-Bergère”.

33. Disable a surveillance camera for, say ABET
The word “abet” comes into English from the Old French “abeter” meaning “to bait” or “to harass with dogs” (it literally means “to make bite”). This sense of encouraging something bad to happen morphed into our modern usage of “abet” meaning to aid or encourage someone in a crime.

34. Ovid’s 551 DLI
The Roman poet Publius Ovidius Naso is today known simply as Ovid. Ovid is usually listed alongside the two other great Roman poets: Horace and Virgil. Ovid was very popular in his day, but somehow he fell foul of Emperor Augustus. For a reason unknown today, Augustus banished Ovid to Tomis, an island in the Black Sea. He lived there for about ten years, until he died.

42. “Dirty Jobs” host Mike ROWE
Mike Rowe is the host of the successful reality show called “Dirty Jobs” that is broadcast by “Discovery Channel”. Rowe is also a spokesperson for Ford Motor Company in a series of television commercials. He is quite the singer too, as he sang professionally with the Baltimore Opera for a while.

48. RN workplaces ORS
Registered nurses (RNs) might be found in an operating room (OR) or emergency room (ER).

55. Dalai Lama’s land TIBET
The Dalai Lama is a religious leader in the Gelug branch of Tibetan Buddhism. The current Dalai Lama is the 14th to hold the office. He has indicated that the next Dalai Lama might be found outside of Tibet for the first time, and may even be female.

56. African country whose capital is Accra GHANA
Accra sits on Ghana’s coast and is a major seaport as well as the country’s capital city. The name “Accra” comes from a local word “Nkran” meaning “ants”, a name chosen because of the large number of anthills found in the area when the city was founded.

58. Ill. and Ind., in Monopoly AVE
Illinois Avenue and Indiana Avenue are properties in the game of Monopoly. The street names in the US version of Monopoly are locations in or around Atlantic City, New Jersey.

60. Ditzy one SPACE CADET (giving “save space”)
The expression “space cadet” is used to describe someone who is eccentric and disconnected with reality. It may even imply that the person is a user of hallucinogens. The phrase has been around since the sixties, and may be derived from the science fiction TV show “Tom Corbett, Space Cadet” which aired in the fifties.

We’ve been using the noun “quarry” to mean “anything chased in a hunt” since the early 17th century. The term derives from the earlier term “”quirre”, which were the entrails of a deer that were given to dogs as a reward after a successful kill.

64. Holmes of “Batman Begins” KATIE
Tom Cruise’s third wife was actress Katie Holmes The high-profile couple were dubbed TomKat by the entertainment media. Cruise and Holmes had one child together, a daughter named Suri who was born in 2006. TomKat divorced in 2012.

“Batman Begins” is a 2005 movie in the “Batman” franchise, in which Christian Bale plays the title character. This film tells the story of how Batman came to be, and deals with Bruce Wayne’s original fear of bats, the death of his parents, and the events leading to his adoption of the Batman persona.

Down
1. Skewered Asian snack SATAY
The dish known as “satay” originated in Java, Indonesia and is marinated pieces of meat served on a skewer in a sauce, often a spicy peanut sauce. “Satay” is the Indonesian spelling, and “sate” is the Malay spelling.

4. One at the Louvre UNE
The Musée du Louvre has the distinction of being the most visited art museum in the whole world. The collection is housed in the magnificent Louvre Palace which used to be the seat of power in France, until 1682 when Louis XIV moved to Versailles.

6. Chain known for its New York pizza SBARRO
The Sbarro chain of pizza restaurants was founded by Italian immigrants, Gennaro and Carmela Sbarro.

9. ISP connection option DSL
The abbreviation “DSL” originally stood for Digital Subscriber Loop, but is now accepted to mean (Asymmetric) Digital Subscriber Line. DSL is the technology that allows Internet service be delivered down the same telephone line as voice service, by separating the two into different frequency signals.

An Internet Service Provider (ISP) is just what the name indicates, a company that provides its customers with access to the Internet.

10. About 30% of Africa SAHARA
The name “Sahara” means “greatest desert” in Arabic and it is just that, a great desert covering almost 4 million square miles of Northern Africa. That’s almost the size of the United States.

12. People shelfmate US WEEKLY
“Us Weekly” is a celebrity gossip magazine, first published in 1977 as “Us”. Originally issued every two weeks, “Us” became a monthly magazine in 1991, and moved to a weekly format in 2000.

24. Christian of fashion DIOR
Christian Dior was a French fashion designer. As WWII approached, Dior was called up by the French military, drawing a temporary halt to his career in fashion. He left the army in 1942 and for the duration of the war designed clothes for wives of Nazi officers and French collaborators. After the war his designs became so popular that he helped reestablish Paris as the fashion center of the world.

28. Dubbed NAMED
Kneel, and the Queen might “dub thee a knight”, if you’re lucky. “Dub” is a specific term derived from Old English that was used to mean “make a knight”. As the knight was also given a knightly name at the same time, “dub” has come to mean “give someone a name”.

32. La Brea attraction TAR PIT
The La Brea Tar Pits are located right in the heart of the city of Los Angeles. At the site there is a constant flow of tar that seeps up to the surface from underground, a phenomenon that has been around for tens of thousands of years. What is significant is that much of the seeping tar is covered by water. Over many, many centuries animals came to the water to drink and became trapped in the tar as they entered the water to quench their thirsts. The tar then preserved the bones of the dead animals. Today a museum is located right by the Tar Pits, recovering bones and displaying specimens of the animals found there. It’s well worth a visit if you are in town …

35. Worldwide lending org. IMF
The International Monetary Fund (IMF) was established at the end of 1945 with 29 major economies supporting and funding an effort to stabilize economies across the globe after WWII. Headquartered in Washington, D.C., today the IMF has 187 member countries.

54. Dijon heads TETES
Dijon is a city in eastern France, in the Burgundy region. Dijon is famous for its mustard, a particularly strong variation of the condiment. The European Union doesn’t protect the name “Dijon” so anyone can use it on a label. That seems fair enough to me, given that 90% of the mustard made in and around Dijon is produced using mustard seed imported from Canada!

Here in the US, an official report from a school listing classes taken and grades received is called a “transcript”.

60. Après-ski option SPA
Après-ski is a French term, meaning “after skiing”, and refers to the good times to be had after coming off the slopes.