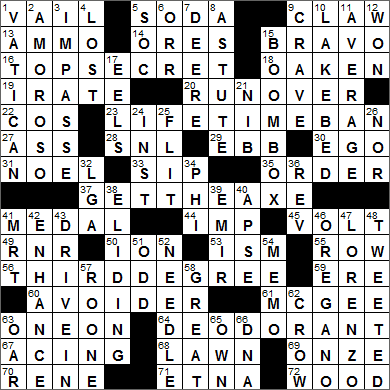 CROSSWORD SETTER: Jeff Stillman
THEME: Deodorants … today’s themed answers are well-known phrases that happen to end with the name of a deodorant. The clues refer to the deodorant, and not the phrase’s usual meaning:

64A. Theme of this puzzle DEODORANT

Today’s Wiki-est, Amazonian Googlies
Across
1. Resort near Arapaho National Forest VAIL
The Vail Ski Resort in Colorado is the largest single-mountain ski resort in the whole country. The resort was opened in 1962, basically in the middle of nowhere. It was given the name Vail after Vail Pass which runs by the mountain (now also called Vail Mountain). The town of Vail, Colorado was established four years later in 1966, and now has a population of about 5,000.

Arapaho National Forest in north-central Colorado was established in 1908 by President Teddy Roosevelt. The 1984 movie “Red Dawn” was set in the forest.

16. Very best 64-Across? TOP SECRET
Secret is an antiperspirant/deodorant made by Procter & Gamble, first introduced in 1956 as a cream that was applied with the fingers (ick!). There followed a roll-on version in 1958, a spray in 1964 and the solid stick in 1978.

23. 64-Across that lasts forever? LIFETIME BAN
Ban was the first roll-on deodorant, introduced in 1952. The formulation for Ban is the same as the brand called Mum, the first commercial deodorant, which dates back to the late 1800s.

31. Winter air NOEL
“Noël” is the French word for the Christmas season, ultimately coming from the Latin word for “birth” (natalis). Noel has come to be used as an alternative word for a Christmas carol.

37. Receive one’s 64-Across shipment? GET THE AXE
Axe is a brand of male toiletries made by Unilever, The same products are sold under the brand name Lynx outside of North America.

45. Battery unit VOLT
The volt is a unit of electric potential, or voltage. I always think of electrical voltage as something like water pressure The higher the pressure of water (voltage), the faster the water flows (the higher the electric current that flows).

56. Last of a trio of 64-Across units? THIRD DEGREE
Sure is a brandname of deodorant in the British Isles. The same product is marketed in North America as Degree.

The phrase “third degree” is used to describe a particularly rough interrogation. We seem to be unsure where the expression originates, but there are theories. One is that it refers the third degree level of Freemasonry, which requires rigor and dedication to attain. Another theory is that it comes from Richard Sylvester who was Chief of Police for Washington, D.C. in the early 1900s. Sylvester saw the first degree of police procedure as arrest, the second degree as transportation to jail, and the third degree as interrogation.

61. Bobby who “thumbed a diesel down,” in a 1971 #1 hit MCGEE
Janis Joplin recorded the song “Me and Bobby McGee” just a few days before she died in 1970. The song was released anyway, and it became Joplin’s only number one single. There have been just two posthumous number one singles: Joplin’s “Me and Bobby McGee”, and Otis Redding’s “(Sittin’ on) the Dock of the Bay”.

Busted flat in Baton Rouge, waiting for a train
And I’s feeling nearly as faded as my jeans.
Bobby thumbed a diesel down just before it rained,
It rode us all the way to New Orleans.

68. Croquet surface LAWN
The very genteel game of croquet is played on lawns all over the world. It’s the game where mallets are used to hit wooden balls through hoops embedded in the grass. The name “croquet” is from French dialect and means “hockey stick”. The game originated in Brittany in France, and was popularized in Ireland in the 1830s.

70. Jeweler Lalique RENE
The French jeweler René Lalique was also a glass designer and was well known for glass art, which included automobile hood ornaments. Lalique designed the art deco glass walls and columns in the dining room and grand salon of the SS Normandie. He also provided much of the interior art for St. Matthew’s Church on Jersey in the Channel Islands, so that it is sometimes referred to as “Lalique’s Glass Church”.

71. Peak near Messina ETNA
Mt. Etna is the largest of three active volcanoes in Italy. Mt Etna is about 2 1/2 times the height of its equally famous sister, Mt. Vesuvius.

Messina is a port, and the third largest city on the Italian island of Sicily. The city’s natural harbor has a curved shape like that of a scythe. When founded by Greek colonists in the 8th century BC, the settlements first name was “Zancle”, from the Greek word for “scythe”.

Down
1. Swiss Guard’s station, with “the” VATICAN
The Pontifical Swiss Guard is a small force of about 110 men responsible for the safety of the Pope. To join the Swiss Guard, a recruit must be a single male citizen of Switzerland who has completed basic training with the Swiss military. The commandant of the Guard suggested in 2009 that the force might be open for admission to female recruits one day, but that would be well in the future.

2. Lovingly, in music AMOROSO
Amoroso is the Italian word for “lovingly” and is used as a direction on a musical score.

3. Standoff IMPASSE
“Impasse” is a French word for a blind alley or an impassable road, and we use the term to mean “stalemate”.

6. Defenseman Bobby with many trophies ORR
Bobby Orr is regarded as one of the greatest hockey players of all time. By the time he retired in 1978 he had undergone over a dozen knee surgeries. At 31 years of age, he concluded that he just couldn’t skate anymore. Reportedly, he was even having trouble walking …

7. Mower maker DEERE
John Deere invented the first commercially successful steel plow in 1837. Prior to Deere’s invention, farmers used an iron or wooden plow that constantly had to be cleaned as rich soil stuck to its surfaces. The cast-steel plow was revolutionary as its smooth sides solved the problem of “stickiness”.

9. Have a jones for CRAVE
The slang term “Jones” is used to mean an intense addiction, a yen, and probably arose in the late sixties out of the prior use of “Jones” for the drug heroin.

25. Move like a monarch FLIT
The monarch butterfly has very recognizable orange and black wings, and is often seen across North America. The monarch is the state insect of several US states and was even nominated as the national insect in 1990, but that legislation was not enacted.

32. Airport on Flushing Bay, in itineraries LGA
Fiorello La Guardia was the Mayor of New York from 1934 to 1945, racking up three full terms in office. The famous airport that bears La Guardia’s name was built at his urging, stemming from an incident that took place while he was in office. He was taking a TWA flight to “New York” and was outraged when the plane landed at Newark Airport, in the state of New Jersey. The Mayor demanded that the flight take off again and land at a small airport in Brooklyn. A gaggle of press reporters joined him on the short hop and he gave them a story, urging New Yorkers to support the construction of a new commercial airport within the city’s limits. The new airport, in Queens, opened in 1939 as New York Municipal, often called “LaGuardia” as a nickname. The airport was officially relabeled as “LaGuardia” in 1947.

Flushing Bay is a tidal embankment in New York City that takes its name from the town of Flushing. Flushing was settled in 1645 by the Dutch and was named for the port of Vlissingen in the southwest Netherlands. “Flushing” is English name for the Dutch port.

34. Letter after upsilon PHI
Phi is the 21st letter of the Greek alphabet.

Upsilon is the Greek letter that gives rise to our English “Y”.

38. Saying “somethin’,” say ELIDING
“To elide” is to pass over, omit or slur a syllable when speaking.

39. Kuwaiti ruler EMIR
The State of Kuwait sits at the northern tip of the Persian Gulf, famously sharing a border to the north with Iraq. After WWI, Kuwait was a Protectorate within the British Empire and then gained independence from the UK in 1961. Iraq annexed Kuwait in 1990, which led to the Gulf War of 1990-1991.

40. Church area APSE
The apse of a church or cathedral is a semicircular recess in an outer wall, usually with a half-dome as a roof and often where there resides an altar. Originally apses were used as burial places for the clergy and also for storage of important relics.

41. “I pity the fool” speaker MR T
Mr. T’s real name is Laurence Tero Tureaud. Mr. T is famous for many things, including the wearing of excessive amounts of jewelry. He started this habit when he was working as a bouncer, wearing jewelry items that had been left behind by customers at a nightclub so that the items might be recognized and claimed. It was also as a bouncer that he adopted the name Mr. T. His catch phrase comes from the movie “Rocky III”. In the film, before he goes up against Rocky Balboa, Mr. T says, “No, I don’t hate Balboa, but I pity the fool”. He parlayed that line into quite a bit of success. He had a reality TV show called “I Pity the Fool”, and produced a motivational video called “Be Somebody … or Be Somebody’s Fool!”.

43. Classic A&W restaurant DRIVE-IN
A&W is a chain of fast-food restaurants that is noted for its draft root beer. The chain was founded by partners Roy W. Allen and Frank Wright, who used the initials of their family names to first name their root beer, and ultimately their restaurants. Many A&W restaurants are drive-ins, with carhops.

Carhops are servers who bring food to customers in their cars at drive-in restaurants. The first carhops were seen at the Pig Stand restaurant in Dallas, Texas in 1921. These male employees would “hop” onto the running board of cars as they entered the restaurant’s parking lot in order to quickly take the customer’s order, hence the name “carhop”.

46. Marjoram kin OREGANO
Marjoram is a fragrant herb that is native to the Mediterranean area. The related species of oregano is sometimes known as wild marjoram.

47. Actor Lamas-Craig LORENZO
Lorenzo Lamas-Craig is an actor from Santa Monica, California who is best known perhaps for playing the character Hector Ramirez on the soap opera “The Bold and the Beautiful”. Lamas-Craig’s stepmother was Esther Williams, who married his father when Lorenzo was eleven years old.

57. TV exec Arledge ROONE
Roone Arledge was an executive at ABC. Arledge made a name for himself in sports broadcasting and then took over ABC News in 1977, a position he held until his death in 2002.

63. Dinghy propeller OAR
Our term “dinghy” comes from the Hindi “dingi”, the word for a small boat.