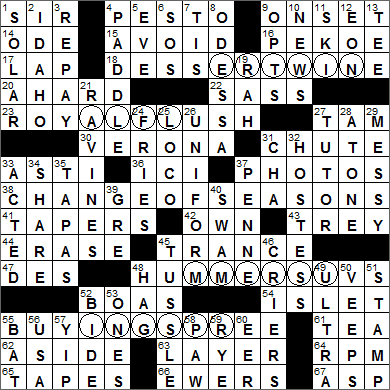 CROSSWORD SETTER: C.W. Stewart
THEME: Change of Seasons … each of today’s themed answers includes a hidden anagram (using the circled letters). Each hidden sequence of letters is a CHANGE (anagram) OF A SEASON:

38A. It happens four times a year … and also in this puzzle’s circles CHANGE OF SEASONS

Today’s Wiki-est, Amazonian Googlies
Across
4. Gnocchi sauce PESTO
The term “pesto” applies to anything made by pounding. What we tend to know as “pesto” sauce is more properly called “pesto alla genovese”, pesto from Genoa in northern Italy. I love, love pesto sauce …

Gnocchi are small dumplings in Italian cuisine that can be made from various ingredients including potato, my personal favorite. The name “gnocchi” might be derived from the Italian “nocchio” meaning “knot in wood”.

14. Keats’ “__ to a Nightingale” ODE
The poet John Keats is famous for writing a whole series of beautiful odes. The most renowned are the so-called “1819 Odes”, a collection from the year 1819 that includes famous poems such as “Ode on a Grecian Urn”, “Ode to a Nightingale” and “Ode to Psyche”.

16. With 61-Across, Sri Lankan product PEKOE
(61A. See 16-Across TEA)
A pekoe (or more commonly, orange pekoe) is a medium-grade black tea. There is no orange flavor in an orange pekoe tea. The “orange” name most likely derived from the name of the trading company that brought the tea to Europe from Asia.

The name Sri Lanka translates from Sanskrit into English as “venerable island”. Before 1970, Sri Lanka was known as Ceylon, a name given to the country during British rule.

18. Sweet sherry, e.g. DESSERT WINE
Sherry is a fortified wine made using grapes from around the town of Jerez de la Frontera (formerly “Xerez” or “Xeres”) in the autonomous community of Andalusia in Spain. The word “sherry” is an anglicized form of the name “Jerez”.

23. Unbeatable hand ROYAL FLUSH
The poker hand called a royal flush is the highest-ranking hand possible. It consists of a run of 10, Jack, Queen, King and Ace, with all in the same suit.

27. Hat worn with a kilt TAM
A tam o’shanter is a man’s cap traditionally worn by Scotsmen. “Tams” were originally all blue (and called “blue bonnets”), but as more dyes became readily available they became more colorful. The name of the cap comes from the title character of Robert Burns’ poem “Tam O’Shanter”.

30. “Romeo and Juliet” city VERONA
Verona is a city in northern Italy. Famously, William Shakespeare set three of his plays in Verona: “Romeo and Juliet”, “The Two Gentlemen of Verona” and “The Taming of the Shrew”.

33. __ Spumante ASTI
Asti is in the Piedmont region of northwest Italy. The region is perhaps most famous for its Asti Spumante sparkling white wine.

43. Long basket, in hoops lingo TREY
A trey of clubs, for example, is a name for the three of clubs in a deck of cards. The name “trey” can also be used for a domino with three pips, and even a three-point play in basketball.

47. Only article in a U.S. state capital name DES
The city of Des Moines is the capital of Iowa, and takes its name from the Des Moines River. The river in turn takes its name from the French “Riviere des Moines” meaning “River of the Monks”. It looks like there isn’t any “monkish” connection to the city’s name per se. “Des Moines” was just the name given by French traders who corrupted “Moingona”, the name of a group of Illinois Native Americans who lived by the river. However, others do contend that French Trappist monks, who lived a full 200 miles from the river, somehow influenced the name.

52. Burlesque wraps BOAS
“Burlesque” came into English from French, although the word is rooted in the Italian “burla”, the word for a joke, or mockery. A burlesque is work of literature, drama or music that is intended to amuse and cause laughter. Burlesques in the US took on a variety show format and were popular in the US from the 1860s. Over time, the variety acts started to include female striptease, and the term “burlesque” has come to be mainly associated with such entertainment. The derivative verb “to burlesque” means “to imitate mockingly”.

55. Pre-holiday mall indulgence BUYING SPREE
Surprisingly, our word “mall”, meaning “shady walk” or “enclosed shopping space”, comes from the Italian for “mallet”. All of our shopping-style malls are named for “The Mall” in St. James’s Park in London. This tree-lined promenade was so called as it used to a famous spot to play the croquet-like game called “pall-mall”. The game derived its name from the Italian for ball (palla) and mallet “maglio”. The London thoroughfare called the Mall still exists, at one end of which is Buckingham Palace. Indeed, parallel to the Mall is a street called Pall Mall.

67. Critter in Egyptian art ASP
The venomous snake called an asp was a symbol of royalty in Ancient Egypt.

2. One of three Hells Canyon states IDAHO
Hells Canyon in the northwestern US is the deepest river gorge in the country. The river that carved out the canyon is the Snake River, itself a tributary of the Columbia.

6. Distress signal SOS
The combination of three dots – three dashes – three dots, is a Morse signal first introduced by the German government as a standard distress call in 1905. The sequence is remembered as the letters SOS (three dots – pause – three dashes – pause – three dots), although in the emergency signal there is no pause between the dots and dashes, so SOS is in effect only a mnemonic. Similarly, the phrases “Save Our Souls” and “Save Our Ship” are also mnemonics, introduced after the “SOS” signal was adopted.

7. “Whether __ nobler …”: Hamlet ‘TIS
To be, or not to be, that is the question:
Whether ’tis nobler in the mind to suffer
The Slings and Arrows of outrageous fortune;
Or to take Armes against a Sea of troubles …
There has been centuries of debate about how one interprets Hamlet’s soliloquy that begins “To be or not to be …”. My favorite opinion is that Hamlet is weighing up the pros and cons of suicide (“to not be”).

8. Ukrainian port ODESSA
The city of Odessa (also “Odesa”) in Ukraine was founded relatively recently, in 1794 by Catherine the Great. The city was originally meant to be called Odessos after an ancient Greek city believed to have been located nearby. Catherine liked the way the locals pronounced the name as “Odessa” and so went with the less Greek-sounding name.

24. Wendy’s side FRIES
Famously, the Wendy’s chain of fast food restaurants was founded by Dave Thomas, in 1969 in Columbus, Ohio. Dave named his establishment after his fourth child, Melina Lou “Wendy” Thomas.

25. Maniacal LOCO
In Spanish, if one isn’t sane (sano) one might be described as crazy (loco).

26. Military outfit UNIFORM
Uniforms are distinctive clothes work by a group of people. That dress alike, are “uniform” in appearance, hence the use of the term “uniform”.

31. Half a dance CHA
The cha-cha-cha (often simplified to “cha-cha”) is a Latin dance with origins in Cuba, where it was introduced by composer Enrique Jorrin in 1953.

35. Spanish finger food TAPAS
“Tapa” is the Spanish word for “lid”, and there is no clear rationale for why this word came to be used for an appetizer. There are lots of explanations cited, all of which seem to involve the temporary covering of one’s glass of wine with a plate or item of food to either preserve the wine or give one extra space at the table.

37. Tubular pasta PENNE
Cylindrical pasta is known in general as “penne”, and there are many variants. For example, ziti is a particularly large and long tube with square-cut ends. “Penne” is the plural of “penna”, the Italian for “feather, quill”.

39. MBA hopeful’s test GRE
Passing the Graduate Record Examination (GRE) is usually a requirement for entry into graduate school here in the US.

46. Old-time broadcasters CRIERS
Town criers make public announcements on the streets, usually shouting “Oyez! Oyez! Oyez!” to attract attention. The term “oyez” derives from the Anglo-Norman word for “listen” and is used in this instance to me “Hear ye!”

51. Passport image STAMP
A visa is a usually a stamp in one’s passport, an indication that one is authorized to enter a particular country. The word “visa” comes into English, via French, from the Latin expression “charta visa” meaning “paper that has been seen”, or “verified paper”.

56. NATO founding member USA
The North Atlantic Treaty Organization (NATO) was founded not long after WWII in 1949 and is headquartered in Brussels, Belgium. The first NATO Secretary General was Lord Ismay, Winston Churchill’s chief military assistant during WWII. Famously, Lord Ismay said the goal of NATO was “to keep the Russians out, the Americans in, and the Germans down.”

59. Reuben bread RYE
There are conflicting stories about the origin of the Reuben sandwich. One is that it was invented around 1914 by Arnold Reuben, an immigrant from Germany who owned Reuben’s Deli in New York.