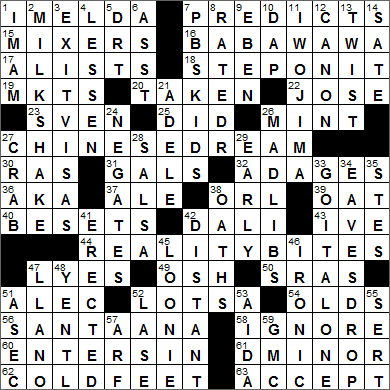 7. Emulates Cassandra PREDICTS
I think Cassandra is such a great name, translating from Greek as “she who entangles men”. The Cassandra of Greek mythology was so beautiful that Apollo gave her the gift of prophecy. There is another story though, that she gained her gift as a seer by spending the night in Apollo’s temple where snakes licked her ears clean so that she could hear the future. Ugh …

16. ’70s “SNL” parody BABA WAWA
Barbara Walters was originally quite upset at the caricature of her performed by Saturday Night Live star, Gilda Radner. She took offense at Radner exaggerating her speech impediment, which of course led to the name “Baba Wawa” being used for “Barbara Walters”. However, when she saw that her own daughter found the skit to be hilarious, Barbara decided that she needed to lighten up.

22. Tenor Carreras JOSE
José Carreras is a celebrated tenor from Barcelona who is perhaps best known to a wider audience as one of the Three Tenors, alongside Plácido Domingo and Luciano Pavarotti.

27. Term used by President Xi Jinping in promoting long-range goals for his people CHINESE DREAM
President Xi Jinping of China has been associated with the phrase “Chinese Dream”, a slogan that he started to use in 2012. President Jinping’s description of the Chinese Dream includes an appeal to young people, who should “dare to dream, work assiduously to fulfill the dreams and contribute to the revitalization of the nation.” It is said that the phrase was inspired by the phrase “American Dream”.

A “dossier” is a collection of papers with information about a person or subject. “Dossier” is a French term meaning “bundle of papers”. The French word comes from the word “dos” meaning “back”. It is suggested that the term “dossier” arose as there was usually a label on the back (dos) of the bundle.

37. Bass, e.g. ALE
The red triangle on the label of a bottle of Bass Ale was registered in 1875 and is UK Registered Trade Mark (TM) No: 00001, the first trademark issued in the world.

38. Magic, on scoreboards ORL
The Orlando Magic basketball team was formed in 1989 as an NBA expansion team. A local paper was asked to run a competition to suggest names for the new team and the community came up with its four top picks of “Heat”, “Tropics”, “Juice” and “Magic”. A committee then opted for “Orlando Magic”. A good choice I think …

42. Artist who wrote “Diary of a Genius” DALI
The famous surrealist painter Salvador Dalí was born in Figueres, Spain. I had the privilege of visiting the Dalí Museum in Figueres some years ago, just north of Barcelona. If you ever get the chance, it’s a “must see” as it really is a quite magnificent building with a fascinating collection.

44. 1994 Ben Stiller comedy REALITY BITES
Ben Stiller is the son of actors Jerry Stiller and Anne Meara. Ben is perhaps as well-known as a director as he is an actor. He made his debut as a director in the film “Reality Bites” in 1994.

47. Corrosive fluids LYES
What we call “lye” is usually sodium hydroxide, although historically the term was used for potassium hydroxide. Lye has many uses, including to cure several foodstuffs. Lye can make olives less bitter, for example. The chemical is also found in canned mandarin oranges, pretzels and Japanese ramen noodles. More concentrated grades of lye are used to clear drains and clean ovens. Scary …

49. Kyrgyzstan province OSH
Osh is the second largest city in the former Soviet Republic of Kyrgyzstan (after the capital Bishkek). Osh was a center of silk production and lies along the old Silk Road, the trade route that traversed Asia.

51. Pianist Templeton ALEC
Alec Templeton was a composer and pianist from Cardiff in Wales. Active from the 1930s to the early 1960s, Templeton played mainly classical and jazz music. He was also blind, and had been so from birth.

61. Key of Beethoven’s Ninth D MINOR
Beethoven’s Ninth Symphony is his wonderful “Choral” symphony. When it was composed in 1824 it was the first time that a major composer had used voices in a symphony. By the time of the Ninth’s premier, Beethoven was essentially deaf. He insisted on sharing the stage with the musical director (who was conducting), and was visibly counting out time but was off by quite a few measures. When the last notes were played there was enthusiastic applause, although Beethoven was still conducting. The lead contralto had to walk over to Beethoven, stop him, and turn him to the audience to receive his adulation.

Down
1. Saudi Arabia’s Abdul Rahman Al-Sudais, for one IMAM
An imam is a Muslim leader, often the person in charge of a mosque or perhaps a Muslim community.

Abdul Rahman Al-Sudais is the imam of the Masjid al-Haram, the Great Mosque of Mecca.

The largest mosque in the world is Al-Masjid Al-Haram in Mecca, sometimes referred to in English as the Sacred Mosque or the Grand Mosque. Al-Masjid Al-Haram is home to the Kaaba, the most sacred location in Islam. Muslims face in the direction of the Kaaba when performing formal worship known as Salat.

3. Permits to leave EXIT VISAS
A visa is a usually a stamp in one’s passport, an indication that one is authorized to enter (or sometimes leave) a particular country. The word “visa” comes into English, via French, from the Latin expression “charta visa” meaning “paper that has been seen”, or “verified paper”.

5. 2000 Richard Gere role DR T
The 2000 movie “Dr. T & the Women” is a pretty good film, starring Richard Gere in the title role. There can’t be many romantic comedies about gynecologists …

Curious George is a character in a series of children’s books written by Hans Augusto and Margret Rey. The couple wrote the original stories in Paris, taking the manuscripts with them as they fled from the city ahead of the German invasion, in 1940.

8. Like “American Hustle” RATED R
“American Hustle” is a 2013 movie with a plotline that is loosely based on the famous FBI ABSCAM sting of the late seventies and early eighties. The film stars Christian Bale and Amy Adams as two con artists who are forced to work with an FBI agent played by Bradley Cooper.

10. Fist bump DAP
The dap is a form of handshake, nowadays often a complicated and showy routine of fist-bumps, slaps and shakes. Some say that “dap” is an acronym standing for “Dignity And Pride”.

The fist bump is that tapping of fists together as a form of greeting. It is a more “hip” version of a handshake, a might be called a “pounding of flesh”.

11. Battle site commemorated on a 3-cent stamp IWO JIMA
Iwo Jima is a volcanic island located south of Tokyo that today is uninhabited. The name is Japanese for “Sulfur Island”, referring to the sulfur mining on which Iwo Jima’s economy once depended. There were about a thousand Japanese civilians living on the island prior to WWII. In 1944, there was a massive influx of Japanese military personnel in anticipation of the inevitable US invasion. As the Japanese military moved in, the civilians were forced out and no one has lived there since.

The Marine Corps War Memorial at the entrance to Arlington National Cemetery is often referred to as the Iwo Jima Memorial. Famously, the memorial is a statue depicting six serviceman raising a US flag on Mount Suribachi during the Battle of Iwo Jima of WWII. The statue is based on a memorable photograph taken during the battle by Joe Rosenthal. The memorial was dedicated by President Eisenhower in 1954. The same scene was used on a 3-cent stamp first issued on July 11, 1945.

12. Vixia camcorder maker CANON
Canon’s Vixia line of camcorders are tapeless models that use digital memory cards for storage. They were introduced in 2008.

14. Fill up SATE
“Sate” is a variant of the older word “satiate”. Both terms can mean either to satisfy an appetite fully, or to eat to excess.

21. “Skyfall” singer ADELE
Adele is the stage name of English singer Adele Adkins. Adele’s debut album is “19”, named after the age she was during the album’s production. Her second album was even more successful than the first. Called “21”, the second album was released three years after the first, when Adele was three years older.

I have not been a fan of Daniel Craig as James Bond (preferring Sean Connery and Pierce Brosnan in the role). However, I saw “Skyfall” when it first came out and have been won over. “Skyfall” is one of the best Bond films so far, in my humble opinion. And Adele’s rendition of the title song is an added plus …

26. Improvisational game MAD LIBS
Mad Libs is a word game, mostly played by children in America. The idea is that one player provides a list of words which are then inserted into blank spots in a story, usually with hilarious results (they say!).

34. Show unwelcome interest EAVESDROP
To “eavesdrop” is to listen in on someone else’s conversation without being invited to do so. The term comes from the practice of spies loitering in the area just outside the walls of a house, particularly in the “eavesdrip”, the ground close to a house that catches the drips of rainwater falling from the eaves of the roof.

Notre Dame de Paris is the spectacular Gothic cathedral that sits on the Île de la Cité, one of the islands in the middle on the River Seine in Paris. Notre Dame is home to many beautiful and significant artifacts, the most famous of which is the Crown of Thorns supposedly worn by Jesus Christ at his execution, placed in the cathedral in 1239. It’s also home to some magnificent gargoyles on the roof, and you can climb up to the roof and take a very close look at them.

45. Canadian dollar coin LOONIE
The great northern loon is the provincial bird of Ontario, and the state bird of Minnesota. The loon once appeared on Canadian $20 bills and also appears on the Canadian one-dollar coin, giving the coin the nickname “the Loonie”.

47. Peruvian prairie LLANO
“Llano” is the Spanish word for “plain”.

48. Tovah Feldshuh Broadway role YENTL
Tovah Feldshuh is an American actress, who first experienced real celebrity after playing Helena Slomova in the miniseries “Holocaust” in 1978. She had the leading role in “Yentl” on Broadway, a role later to be played by Barbra Streisand on the big screen. She also appeared in the 1985 movie version of “Brewster’s Millions” alongside Richard Pryor.

52. Use a beam on LASE
The term “laser” is an acronym standing for “Light Amplification by Stimulated Emission of Radiation” (LASER). It has been pointed out that a more precise name for laser technology is “Light Oscillation by Stimulated Emission of Radiation”, but the resulting acronym isn’t quite so appealing, namely LOSER …

53. Radamès’ love AIDA
“Aida” is the famous opera by Giuseppe Verdi, actually based on a scenario written by French Egyptologist Auguste Mariette. Mariette also designed the costumes and stages for the opening performance. The opera was first staged in 1871 in an opera house in Cairo. In the storyline, Aida is an Ethiopian princess brought into Egypt as a slave. Radamès is an Egyptian commander who falls in love with her, and then of course complications arise!

59. Safari maker GMC
The Chevrolet Astro is a minivan that GM made from 1985 to 2005. The same car was also sold as the GMC Safari.