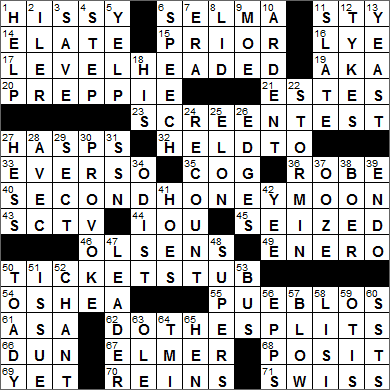 CROSSWORD SETTER: Bruce Venzke & Gail Grabowski
THEME: Do the Splits … each of today’s themed answers starts with something that is often SPLIT:

Today’s Wiki-est, Amazonian Googlies
Across
6. Alabama civil rights march city SELMA
The Bloody Sunday march took place between Selma and Montgomery, Alabama on 7 March 1965. The 600 marchers involved were protesting the intimidation of African-Americans registering to vote. When the marchers reached Dallas County, Alabama they encountered a line of state troopers reinforced by white males who had been deputized that morning to help keep the peace. Violence broke out with 17 marchers ending up in hospital, one nearly dying. Because the disturbance was widely covered by television cameras, the civil rights movement picked up a lot of support that day.

14. Send to seventh heaven ELATE
In cosmology associated with some religious traditions, the universe is said to be made up of Seven Heavens. The highest of these is the “seventh heaven”.

16. Drain-clearing chemical LYE
What we call “lye” is usually sodium hydroxide, although historically the term was used for potassium hydroxide. Lye has many uses, including to cure several foodstuffs. Lye can make olives less bitter, for example. The chemical is also found in canned mandarin oranges, pretzels and Japanese ramen noodles. More concentrated grades of lye are used to clear drains and clean ovens. Scary …

20. Private school attendee PREPPIE
A “preppy” is a student or graduate of a preparatory school. Such a school is designed to prepare students for college, and is often private and expensive in terms of fees.

27. Padlocked fasteners HASPS
A hasp might be a clasp on a door that slips over a looped staple so that it might be fastened with say a padlock.

40. Romantic anniversary getaway SECOND HONEYMOON (giving “split second”)
The concept of a honeymoon vacation only started in the early 1800s. In Britain, wealthy couples would take a “bridal tour” together after wedding, visiting those friends and relatives who could not attend the ceremony. The etymology of “honeymoon” isn’t very clear, and may even have a negative derivation as it might suggest that the sweetness (honey) of love is doomed to wane like a passing phase of the moon. The equivalent terms in some other languages are “moon of honey” (French), “honey month” (Welsh) and “tinsel week” (German).

46. “Full House” acting twins OLSENS
I know very little about the Olsen twins, but I am told that folks believe Mary-Kate and Ashley to be identical twins. They look very much alike, but are in fact fraternal twins. The sisters were cast as Michelle Tanner on the eighties sitcom “Full House”, taking turns playing the role.

49. January, to Juan ENERO
In Spanish, the year (el año) starts in January (enero) and ends in December (diciembre).

54. Irish actor Milo O’SHEA
Milo O’Shea was a great Irish character actor from Dublin who has appeared in everything from “Romeo and Juliet” to “The West Wing”. Sadly, O’Shea passed away in 2013, in New York City.

55. Hopi homes PUEBLOS
A pueblo is a Native American village, a term used in the American Southwest. The buildings in a pueblo are usually made of stone and adobe mud.

66. Pester for payment DUN
“To dun” is to insist on payment of a debt. The etymology of the term is unclear, with one suggestion that it dates back to a famous debt collector in London named Joe Dun.

67. Bull on a glue container ELMER
Elsie the Cow is the mascot of the Borden Company. Elsie first appeared at the New York World’s Fair in 1939, introduced to symbolize the perfect dairy product. Elsie was also given a husband named Elmer the Bull. Elmer eventually moved over to the chemical division of Borden where he gave his name to Elmer’s Glue.

71. Sandwich cheese with ham SWISS
Swiss cheese is a relatively generic term, a type of cheese produced in various countries and not necessarily in Switzerland. What they all have in common though, is a resemblance to the original Swiss Emmental cheese.

Down
1. “SOS!” HELP!
The combination of three dots – three dashes – three dots, is a Morse signal first introduced by the German government as a standard distress call in 1905. The sequence is remembered as the letters SOS (three dots – pause – three dashes – pause – three dots), although in the emergency signal there is no pause between the dots and dashes, so SOS is in effect only a mnemonic. Similarly, the phrases “Save Our Souls” and “Save Our Ship” are also mnemonics, introduced after the “SOS” signal was adopted.

2. Robert who played Anthony Soprano Jr. ILER
The actor Robert Iler’s most famous role was A.J., son of mob leader Tony Soprano in HBO’s “The Sopranos”. Apparently Iler’s screen persona has spilled over into his personal life, as he was arrested for armed robbery of two tourists in 2001 (and pleaded guilty to a lesser charge).

9. Cohort of Curly and Larry MOE
If you’ve seen a few of the films starring “The Three Stooges” you’ll have noticed that the line up changed over the years. The original trio was made up of Moe and Shemp Howard (two brothers) and Larry Fine (a good friend of the Howards). This line up was usually known as “Moe, Larry and Shemp”. Then Curly Howard replaced his brother when Shemp quit the act, creating the most famous trio, “Moe, Larry And Curly”. Shemp returned when Curly had a debilitating stroke in 1946, and Shemp stayed with the troupe until he died in 1955. Shemp was replaced by Joe Besser, and then “Curly-Joe” DeRita. When Larry Fine had a stroke in 1970, it effectively marked the end of the act.

12. Tricycle riders TYKES
“Tyke” has been used playfully to describe a young child since at least 1902, but for centuries before that a tyke was a cur or mongrel, or perhaps a lazy or lower-class man.

18. “__ Girl Friday”: 1940 Cary Grant comedy HIS
The wonderful, wonderful actor Cary Grant was born in Bristol in England, and was given the name Archibald Leach. In the 1949 Howard Hawks film “His Girl Friday”, there’s a line where Grant describes the fate suffered by someone who crossed him. He names that person “Archie Leach”, an ad-lib using his real name.

25. North Carolina university ELON
Elon is a city in the Piedmont region of North Carolina, close to the city of Burlington. Elon University is a private liberal arts school founded in 1889.

27. Gas brand with collectible toy trucks HESS
The Hess Corporation is an oil company based in New York City. In 1964, the company started selling toy trucks with the Hess logo on them, in Hess gas stations. The company has been selling them every since, bringing out new models just before Christmas. Hess toy trucks have become quite collectible and the old ones can fetch a pretty penny.

30. Egg on PROVOKE
The verb “edge” has been used to mean to incite, to urge on, from the 16th century. Somewhere along the way, “edge” was mistakenly replaced with “egg”, giving us our term “to egg on” meaning “to goad”.

31. ID on an IRS form SSN
The main purpose of a Social Security Number (SSN) is to track individuals for the purposes of taxation, although given its ubiquitous use, it is looking more and more like an “identity number” to me. The social security number system was introduced in 1936. Prior to 1986, an SSN was required only for persons with substantial income so many children under 14 had no number assigned. For some years the IRS had a concern that a lot of people were claiming children on their tax returns who did not actually exist. So, from 1986 onward, it is a requirement to get an SSN for any dependents over the age of 5. Sure enough, in 1987 seven million dependents “disappeared”.

38. Afrikaans speaker BOER
“Boer” is the Dutch and Afrikaans word for “farmer”, a word that was used to describe the Dutch-speaking people who settled parts of South Africa during the 1700s.

50. Sycophant TOADY
A sycophant is a selfish person, one who flatters. The term comes from the Greek “sykophantes” which originally meant “one who shows the fig”. This phrase described a vulgar gesture made with the thumb and two fingers.

A “toady” is someone who is very servile, and somewhat of a parasite. Derived from “toad-eater” the term originally applied to the assistant of a “quack”, a seller of useless potions that had no actual benefit to health. The “toady” would eat an apparently poisonous toad in front of an audience, so that the charlatan could “cure” him or her with one of the potions for sale.

53. Urban transport BUS
We use the term “bus” for a mode of transportation, an abbreviated form of the original “omnibus”. We imported “omnibus” via French from Latin, in which language it means “for all”. The idea is that an omnibus is a “carriage for all”.

56. Omar of “House” EPPS
Omar Epps is the actor who played Eric Forman on the excellent television series “House”. Prior to playing Dr. Foreman, Epps had a recurring role playing Dr. Dennis Grant on “ER”.

58. Italian actress Virna LISI
Virna Lisi is an Italian film actress who made a few movies in Hollywood in the sixties. Lisi appeared opposite Jack Lemmon in the fun movie “How to Murder Your Wife” in 1965, and with Frank Sinatra in “Assault on a Queen” in 1966.

59. Elevator pioneer OTIS
Elevators (simple hoists) have been around for a long time. What Elisha Otis did was come up with the “safety elevator”, a design that he showcased at the 1853 World’s Fair in New York. At the Fair, Otis would stand on an elevated platform in front of onlookers and order his assistant to cut the single rope holding up the platform. His safety system kicked in when the platform had only fallen a few inches, amazing the crowd. After this demonstration, the orders came rolling in.

60. Former Mach 2 fliers, briefly SSTS
The most famous supersonic transport (SST) is the retired Concorde. Famously, the Concorde routinely broke the sound barrier, and cruised at about twice the speed of sound. Above Mach 2, frictional heat would cause the plane’s aluminum airframe to soften, so airspeed was limited.

The Mach number of a moving object (like say an airplane) is its speed relative to the speed of sound. A plane travelling at Mach 2, for example, is moving at twice the speed of sound. The term “Mach” takes its name from the Austrian physicist Ernst Mach who published a groundbreaking paper in 1877 that even predicted the “sonic boom”.

63. World Cup cry OLE!
The International Federation of Association Football (“Fédération Internationale de Football Association” in French) is usually referred to by the acronym “FIFA”. FIFA is the governing body of the game of soccer (association football), and the organizer of the FIFA World Cup held every four years.

64. Texter’s “Keep the details to yourself” TMI
Too Much Information (TMI)

65. One in a coop group HEN
An Old English word for basket (“cypa”) started to be used in the 14th century as the word “coop”, meaning a small cage for poultry, a word we still use today.