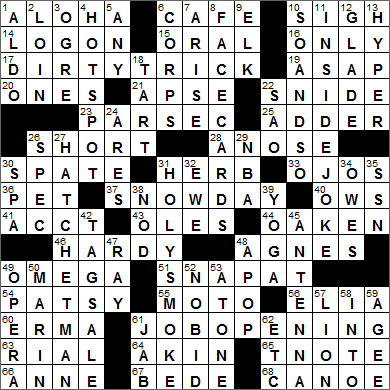 61A. Employment opportunity, and a hint to the first word of the answers to starred clues JOB OPENING

Today’s Wiki-est, Amazonian Googlies
Across
1. Honolulu “howdy” ALOHA
The Hawaiian word “Aloha” has many meanings in English: affection, love, peace, compassion and mercy. More recently “aloha” has come to mean “hello” and “goodbye”, but only since the mid-1800s.

20. White Monopoly bills ONES
The commercial game of Monopoly is supposedly a remake of “The Landlord’s Game” created in 1903 by a Quaker woman called Lizzie Phillips. Phillips used her game as a tool to explain the single tax theory of American economist Henry George. The Landlord’s Game was first produced commercially in 1924. The incredibly successful derivative game called Monopoly was introduced in 1933 by Charles Darrow, who became a very rich man when Parker Brothers bought the rights to the game just two years later in 1935.

21. Church recess APSE
The apse of a church or cathedral is a semicircular recess in an outer wall, usually with a half-dome as a roof and often where there resides an altar. Originally apses were used as burial places for the clergy and also for storage of important relics.

31. Trumpeter Alpert HERB
Herb Alpert still plays the trumpet today, but he is also a talented painter and sculptor. His works are seen regularly in exhibitions all around the world.

44. Like the old bucket of song OAKEN
An old oaken bucket is a traditional trophy awarded in Indiana, and was chosen as the prize when an annual trophy game was inaugurated between Purdue and Indiana in 1925. The particular bucket selected is supposedly one that dates back to the 1840s. Each year the football game is played, a link is added to the chain attached to the bucket. Each link is engraved with either a “P” or and “I”, or perhaps an “I-P”, depending on who wins the football game.

“The Old Oaken Bucket” is a poem by American author Samuel Woodworth. The words of the poem were set to music in 1826:

How dear to this heart are the scenes of my childhood,
When fond recollection presents them to view!
The orchard, the meadow, the deep-tangled wild-wood,
And every loved spot which my infancy knew!
The wide-spreading pond, and the mill that stood by it,
The bridge, and the rock where the cataract fell,
The cot of my father, the dairy-house nigh it,
And e’en the rude bucket that hung in the well-
The old oaken bucket, the iron-bound bucket,
The moss-covered bucket which hung in the well.

46. The __ Boys: fictional detectives HARDY
“The Hardy Boys” series of detective stories for children and teens was created by Edward Stratemeyer. The Hardy Boys first appeared way back in 1927, but I lapped them up in the 1960s.

48. Moorehead of “Bewitched” AGNES
Agnes Moorehead was an actress best remembered for her role as Endora, Samantha’s mother on the sitcom “Bewitched”. Moorehead died in 1974 from uterine cancer. She was one of over 90 out of 220 cast and crew members of the 1956 movie “The Conqueror” who all died from cancer, including co-stars Susan Hayward and John Wayne. There is wide speculation that the people working on the film were affected by radiation from eleven nuclear explosions that had taken place the prior year at the Yucca Flats Nevada Test Site that was located nearby and upwind.

49. Last Greek letter OMEGA
Omega is the last letter of the Greek alphabet and is the one that looks like a horseshoe. The word “omega” literally means “great O” (O-mega). Compare this with the Greek letter Omicron meaning “little O” (O-micron).

55. Japanese detective Mr. __ MOTO
The mysterious Mr. Moto is a Japanese secret agent who appears in six novels by American author, John P. Marquand. Mr. Moto was famously played by Peter Lorre in a series of eight films released in the 1930s.

56. Director Kazan ELIA
Elia Kazan won Oscars for best director in 1948 for “Gentleman’s Agreement” and in 1955 for “On The Waterfront”. In 1999 Kazan was given an Academy Lifetime Achievement Award. He also directed “East of Eden”, which introduced James Dean to movie audiences, and “Splendor in the Grass” that included Warren Beatty in his debut role.

60. Bombeck of household humor ERMA
Erma Bombeck wrote for newspapers for about 35 years, producing more than 4,000 witty and humorous columns describing her home life in suburbia.

63. Iranian currency RIAL
The “Rial” is name of the currency of Iran (as well as Yemen, Oman, Cambodia and Tunisia).

65. Govt.-backed investment T-NOTE
A Treasury note (T-Note) is a government debt that matures in 1-10 years. A T-Note has a coupon (interest) payment made every six months. The T-note is purchased at a discount to face value, and at the date of maturity can be redeemed at that face value. A T-Bill is a similar financial vehicle, but it matures in one year or less, and a T-Bond matures in 20-30 years.

66. Ill-fated Boleyn ANNE
Anne Boleyn was the second wife of Henry VIII of England. Anne was found guilty of high treason after about a thousand days of marriage to Henry, accused of adultery and incest (probably trumped-up charges). She was executed, but perhaps her legacy lived on in her only child, as her daughter reigned for 45 very prosperous years as Queen Elizabeth I.

67. George Eliot’s “Adam __” BEDE
“Adam Bede” was the first novel written by the English writer George Eliot (aka Mary Ann Evans). It was published in 1859 and has been in print since then, over 150 years.

Down
1. Gucci of fashion ALDO
Gucci was founded in Rome in 1921, by Guccio Gucci. Guccio’s son Aldo took over the company after his father’s death in 1953. It was Aldo who established the international presence for the brand and opened the company’s first overseas store, in New York City.

2. Pork cut LOIN
The cut known as “loin” is the tissue along the top of the ribs.

6. The “C” in USMC CORPS
The US Marine Corps (USMC) is the smallest of the four branches in the US Department of Defense (DOD).

9. Antlered grazer ELK
The elk (also known as the wapiti) is the one of the largest species of deer in the world, with only the moose being bigger. Early European settlers were familiar with the smaller red deer back in their homelands, so when they saw the “huge” wapiti they assumed it was a moose, and incorrectly gave it the European name for a moose, namely “elk”. The more correct name for the beast is “wapiti”, which means “white rump” in Shawnee. It’s all very confusing …

22. __ Paulo, Brazil SAO
São Paulo is the largest city in Brazil. São Paulo is also the city with the highest number of helicopters in the world. This is partly driven by the horrendous traffic jams in São Paulo, but also by the wealthy having a very real fear of being kidnapped on the city’s streets.

24. Greek war god ARES
The Greek god Ares is often referred to as the Olympian god of warfare, but originally he was regarded as the god of bloodlust and slaughter. Ares united with Aphrodite to create several gods, including Phobos, Deimos and Eros. The Roman equivalent to Ares was Mars.

29. L.A. Clippers’ org. NBA
The Los Angeles Clippers NBA team started off life as the Buffalo Braves in 1970. The Braves took on the Clippers name when the franchise moved to San Diego in 1978. The new team name was chosen in honor of the great clipper ships that used to pass through San Diego Bay. The San Diego Clippers were sold in 1982 to real estate developer Donald Sterling, who moved the team to his native Los Angeles two years later. That move was not approved by the NBA, which resulted in a lawsuit and a $6 million fine, but the team was allowed to stay in its new home.

35. Govt.-issued ID SSN
The main purpose of a Social Security Number (SSN) is to track individuals for the purposes of taxation, although given its ubiquitous use, it is looking more and more like an “identity number” to me. The social security number system was introduced in 1936. Prior to 1986, an SSN was required only for persons with substantial income so many children under 14 had no number assigned. For some years the IRS had a concern that a lot of people were claiming children on their tax returns who did not actually exist. So, from 1986 onward, it is a requirement to get an SSN for any dependents over the age of 5. Sure enough, in 1987 seven million dependents “disappeared”.

39. Discipline using mats YOGA
In the West we tend to think of yoga as a physical discipline, a means of exercise that uses specific poses to stretch and strengthen muscles. While it is true that the ancient Indian practice of yoga does involve such physical discipline, the corporeal aspect of the practice plays a relatively small part in the whole philosophy. Other major components are meditation, ethical behavior, breathing and contemplation.

42. Bric-a-brac disposal event TAG SALE
Bric-a-brac is a French phrase (actually “bric-à-brac”) that was used as far back as the 16th century. Back then it was a nonsense term meaning “at random” or “any old way”. Since Victorian times we have used the phrase in English to mean a collection of curios, statues and the like. In modern usage, bric-a-brac tends to be a selection of cheaper items.

45. Rabbit ears ANTENNA
Remember the television antenna called a “rabbit ears”? I don’t recall being told this when I was younger, but to get the best reception the length of the “ears” needs to be set at about one half of the wavelength of the signal of the target channel. If only I had known …

49. “Aida,” for one OPERA
“Aida” is a famous opera by Giuseppe Verdi, actually based on a scenario written by French Egyptologist Auguste Mariette, who also designed the costumes and stages for the opening performance. The opera was first performed in 1871 in an opera house in Cairo. In the storyline, Aida is an Ethiopian princess brought into Egypt as a slave. Radames is an Egyptian commander who falls in love with her, and then of course complications arise!

50. County on San Francisco Bay MARIN
When you leave the city of San Francisco via the famous Golden Gate Bridge, you cross into Marin County.