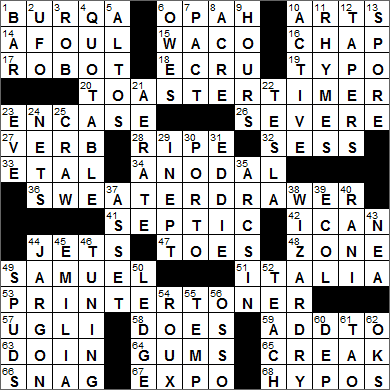 CROSSWORD SETTER: Jascha Smilack
THEME: Punny Answers … each of today’s themed answers is a common phrase, and the corresponding clue reinterprets that phrase in a “punny” way:

20A. One keeping tabs on the best man? TOASTER TIMER
36A. Portrait artist at a gym? SWEATER DRAWER
53A. Coach for a newspaper employee? PRINTER TONER

Today’s Wiki-est, Amazonian Googlies
Across
1. Traditional Islamic garment BURQA
A burqa (also “burka”) is a garment worn by some women in the Islamic tradition to cover up their bodies when in public.

6. Big fish OPAH
Opah is the more correct name for the fish also known as the sunfish, moonfish or Jerusalem haddock. I’ve seen one in the Monterrey Aquarium. It is huge …

15. Brazos River city WACO
In recent years, the city of Waco, Texas is perhaps most famous as the site of a siege and shootout between ATF agents and members of the Protestant sect known as the Branch Davidians. Shortly after ATF agents tried to execute a search warrant, shots were fired and at the end of the fight six people inside the Branch Davidian compound were dead, as were four agents. A fifty-day siege ensued at the end of which a final assault resulted in members of the community setting fire to the compound. Only nine people walked away from that fire. 50 adults and 25 children perished.

The Brazos River is the longest river in the state of Texas. It was originally called “Rio de los Brazos de Dios” by the Spanish, which translates as “the River of the Arms of God”. So, the Brazos is literally “the arms” in English.

17. Primus or Helena, in a classic play ROBOT
In the science fiction play “R.U.R” by Karel Čapek, Primus and Helena are two robots that develop human-like characteristics and fall in love.

18. Tan relative ECRU
The shade called ecru is a grayish, yellowish brown. The word “ecru” comes from French and means “raw, unbleached”. “Ecru” has the same roots as our word “crude”.

20. One keeping tabs on the best man? TOASTER TIMER
The tradition of “toasting” probably dates back to the reign of Charles II, when the practice was to drink a glass of wine to the health of a beautiful or favored woman. In those days, spiced toast was added to beverages to add flavor, so the use of the word “toast” was an indicator that the lady’s beauty would enhance the wine. Very charming, I must say …

34. Of a battery terminal ANODAL
A battery is a device that converts chemical energy into electric energy. A simple battery is made up of three parts: a cathode, an anode and a liquid electrolyte. Ions from the electrolyte react chemically with the material in the anode producing a compound and releasing electrons. At the same time, the electrolyte reacts with the material in the cathode, absorbing electrons and producing a different chemical compound. In this way, there is a buildup of electrons at the anode and a deficit of electrons at the cathode. When a connection (wire, say) is made between the cathode and anode, electrons flow through the resulting circuit from the anode to cathode in an attempt to rectify the electron imbalance.

41. Tank type SEPTIC
Anaerobic organisms are those that do not require oxygen to live. A good example would be the bacteria working away in a septic tank. It’s fortunate that these bacteria are anaerobes, otherwise the tank would have to be opened up to the external atmosphere.

49. Biblical prophet SAMUEL
According to the Bible, Samuel was a leader of the Israelites before they began to be ruled by a king. Samuel anointed Saul and David, the first two kings of Israel.

51. Roma’s home ITALIA
In Italian, the city of Rome (Roma) is in Italy (Italia).

57. Jamaican fruit UGLI
The ugli fruit is a hybrid of an orange and a tangerine, first discovered growing wild in Jamaica where most ugli fruit comes from today. “UGLI” is a trademark name that is a variant of “ugly”, a nod to the fruits unsightly wrinkled rind.

66. Start of a run, maybe SNAG
A “snag” is a pull or a tear in a fabric. A snag, particularly in stockings, might lead to a run. And on the other side of the Atlantic, a “run” is called a “ladder”.

Down
4. Like Twain and Wilde, e.g. QUOTABLE
Samuel Langhorne Clemens was the real name of the author Mark Twain. Twain wasn’t the only pen name used by Clemens. Early in his career he signed some sketches as “Josh”, and signed some humorous letters that he wrote under the name “Thomas Jefferson Snodgrass”. The name of Mark Twain came from the days when Clemens was working on riverboats on the Mississippi. A riverboatman would call out “by the mark twain” when measuring the depth of water. This meant that on the sounding line, according to the “mark” on the line, the depth was two (“twain”) fathoms, and so it was safe for the riverboat to proceed.

8. One of 640 in a square mile ACRE
At one time, an acre was defined as the amount of land a yoke of oxen could plow in a day. This was more precisely defined as a strip of land “one furrow long” (i.e. one furlong) and one chain wide. The length of one furlong was equal to 10 chains, or 40 rods. A area of one furlong times 10 rods was one rood.

13. Fern seed SPORE
Ferns are unlike mosses, in that they have xylem and phloem, making them vascular plants. They also have stems, leaves and roots, but they do not have seeds and flowers, and reproduce using spores. Spores differ from seeds in that they have very little stored food.

22. Palo Alto-based automotive company TESLA
Tesla Motors is a manufacturer of electric vehicles based in Palo Alto, California. Tesla is noted for producing the first electric sports car, called the Tesla Roadster. The current base price of a roadster is about $100,000, should you be interested …

25. Dad or fish preceder CRAW
“Crawdad” and “crawfish” are alternative names for crayfish, with “crawdad” being more common in the south of the country.

30. City south of Lisboa PORTO
As has been pointed out by kind blog readers, there’s an error here as Oporto is located north of Lisbon.

31. Murphy who voices Donkey in “Shrek” EDDIE
Eddie Murphy is a multi-faceted performer and entertainer from the Bushwick neighborhood in Brooklyn, New York. Murphy was a comedian on “Saturday Night Live” from 1980 to 1984. He has also appeared in several hit movies, the success of which make Murphy the fourth-highest grossing actor in the country, as of 2014.

38. Potter’s specialty WIZARDRY
The author of the amazingly successful “Harry Potter” series of books is J. K. Rowling. Rowling wrote the first book when she was living on welfare in Edinburgh in Scotland, and in longhand. She would often write in local cafes, largely because she needed to get her baby daughter out of the house (she was a single mom), and the youngster would tend to fall asleep on walks. Within five years, the single mom on welfare became a very rich woman, and is now worth over $1 billion!

40. Indian royal RANI
“Raja” (also “rajah”) is word derived from Sanskrit that is used particularly in India for a monarch or princely ruler. The female form is “rani” (also “ranee”) and is used for a raja’s wife.

44. Tongue JARGON
“Jargon” can mean nonsensical and meaningless talk, or the specialized language of a particular group, trade or profession. The term is Old French, with the more usual meaning of “a chattering”. How apt …

49. Taters SPUDS
The word “spud” is used as a slang term for a potato and was first recorded in the mid-1800s, in New Zealand would you believe?

54. Béchamel base ROUX
Béchamel sauce is a roux made from butter and flour cooked in milk. It is sometimes known simply as white sauce. Béchamel is also considered one of the five “mother sauces” of French cuisine, as it is the base of other sauces (along with espagnole, velouté, hollandaise and sauce tomate). For example, adding cheese to the Béchamel mother sauce creates Mornay sauce.

béchamel, espagnole, velouté, and allemande.[1] In the early 20th century, Auguste Escoffier refined this list to the contemporary five “mother sauces” by dropping allemande as a daughter sauce of velouté, and adding hollandaise and sauce tomate

56. Bone, to Benito OSSO
“Osso” is the Italian word for bone as in the name of the dish Osso Buco: braised veal shanks.

61. Lao Tzu principle TAO
Lao Tse (also Lao-Tzu) was a central figure in the development of the religion/philosophy of Taoism.