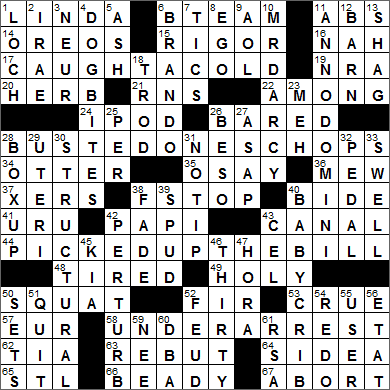 CROSSWORD SETTER: Don Rosenthal
THEME: Under Arrest … each of today’s themed answers starts with a synonym of “UNDER ARREST”.

17A. Started to sneeze and cough, say CAUGHT A COLD
28A. Really worked hard BUSTED ONE’S CHOPS
44A. Paid for everyone’s dinner PICKED UP THE BILL

Today’s Wiki-est, Amazonian Googlies
Across
1. Beatle Paul’s first wife LINDA
Linda Eastman is best-known for her marriage to Paul McCartney. Having said that, I was more aware of Linda’s work as a photographer prior to her relationship with the ex-Beatle. She really knew how to take black & white images. In 1968, Eastman’s portrait of Eric Clapton was the first photo by a woman to be used on the front cover of “Rolling Stone” magazine.

11. Tummy muscles ABS
The abdominal muscles (“abs”) are more correctly referred to as the rectus abdominis muscles. They are all called a “six-pack” in a person who has developed the muscles and who has low body fat. In my case, more like a keg …

20. Basil or rosemary HERB
Traditionally, basil is considered “the king of herbs”. In fact, the herb’s name comes from the Greek “basileus” meaning “king”.

The herb rosemary is reputed to improve the memory. As such, rosemary has been used as a symbol of remembrance, especially in Europe and Australia. For example, mourners might throw sprigs of rosemary into graves, symbolically remembering the dead. The character Ophelia in William Shakespeare’s “Hamlet” utters the line “There’s rosemary, that’s for remembrance”. The name of the herb comes from the Latin “ros marinus” which means “dew of the sea”. The idea is that rosemary can in fact grow in some arid locations with only the moisture that is carried by a sea breeze.

21. IV monitors RNS
A registered nurses (RN) might hook you up to an intravenous drip (IV).

24. Musical Apple IPOD
The iPod is Apple’s signature line of portable media players. The iPod first hit the market in 2001 with a hard drive-based device, now known as the iPod Classic. Later models all use flash memory, allowing a smaller form factor. The smallest of the flash-based models is the iPod Shuffle, which was introduced in 2005.

34. Critter that sleeps floating on its back OTTER
The fur of the sea otter is exceptionally thick. It is in fact the densest fur in the whole animal kingdom.

35. National Anthem starter O SAY
“O say can you see by the dawn’s early light” is the opening line of “The Star-Spangled Banner” by Francis Scott Key.

37. Gen-__: post-baby boomers XERS
The term Generation X originated in the UK where it was the name of a book by Jane Deverson. Her book detailed the results of a study of British youths in 1964, contrasting their lifestyle to those of previous generations. It was Canadian author Douglas Coupland who was responsible for popularizing the term, with his more successful publication “Generation X: Tales for an Accelerated Culture”. By the latest accepted definition, Gen-Xers were born between 1961 and 1981.

38. Camera setting F-STOP
Varying the f-stop in a lens varies how big the lens opening (the aperture) is when a photograph is taken. Smaller apertures (higher f-stop values) admit less light, but result in a greater depth of field (more of the photograph is in focus).

41. Small S.A. country URU
The official name of Uruguay is the Oriental Republic of Uruguay, reflecting the nation’s location on the eastern coast of South America. It is a relatively small country, the second-smallest on the continent, after Suriname. In 2009, Uruguay became the first country in the world to provide a free laptop and Internet access to every child. Now there’s a thought …

42. Red Sox star Big __ PAPI
The Dominican-American baseball player David Ortiz has the nickname “Big Papi”. After each home run that Ortiz scores, he looks upwards and points to the sky, a tribute to his mother who died in a car crash in 2002 when she was only 46 years old.

43. Panama divider CANAL
The Panama Canal was predated by the Panama Railway. The railway’s route actually determined the eventual route of the canal. The impetus to build a canal was spurred on by the success of the Suez Canal which opened in 1869. Work on the Panama Canal started in 1881, but things did not go smoothly at all. Companies involved in the project went bankrupt, one after the other. Eventually the US government bought its way into the project with President Roosevelt handing over millions of dollars to the country of Panama. The canal was finally completed in 1914. All in all, about 27,500 workers died during construction. A kind blog reader highly recommends the book “The Path Between the Seas” by David McCullough, should anyone want to read more about the fascinating tale of Panama Canal’s construction.

52. Holiday tree FIR
The custom of decorating trees at Christmas seems to have originated in Renaissance Germany. Those first trees were placed in guildhalls and were decorated with sweets and candy for the apprentices and children. After the Protestant Reformation, the Christmas tree became an alternative in Protestant homes for the Roman Catholic Christmas cribs. The Christmas tree tradition was imported into Britain by the royal family because of its German heritage. That tradition spread from Britain into North America.

53. Rock’s Mötley __ CRUE
Mötley Crüe is an American rock band, from Los Angeles. They’ve been around since 1981, co-founded by the famous drummer Tommy Lee. Tommy Lee is also known for his two celebrated marriages, the first with Heather Locklear and the second with Pamela Anderson. The name “Mötley Crüe” was chosen as someone once described the band members as a “motley looking crew”. The spelling was made to look a little more exotic, with the umlauts added over the “o” and “u” one day, as the band were drinking bottles of “Löwenbräu” beer!

57. Continent north of Afr. EUR
The continent of Europe was named for Europa, a Phoenician princess of Greek mythology.

62. Aragon aunt TIA
Aragon is an autonomous community in the northern part of Spain that shares a border with France in the Pyrenees.

65. Home of the Cardinals: Abbr. STL
The St. Louis Cardinals were originally called the “Brown Stockings”, changing their name to the “Perfectos” in 1899. That obviously didn’t go down well with the locals, as the owners changed it one year later to the Cardinals.

2. “Dies __”: hymn IRAE
“Dies Irae” is Latin for “Day of Wrath”. It is the name of a famous melody in Gregorian Chant, one that is often used as part of the Roman Catholic Requiem Mass.

6. Godfather portrayer BRANDO
Marlon Brando won the Oscar for Best Actor for his portrayal of Vito Corleone in the 1972 blockbuster “The Godfather”. He turned down the award and didn’t attend the ceremony. Instead he sent a Native American rights activist called Sacheen Littlefeather who made a speech protesting the depiction of Native Americans in Hollywood movies. Brando wasn’t the first person to refuse an Oscar. George C. Scott did the same thing when he won for playing the title role in 1970’s “Patton”. Scott just didn’t like the whole idea of “competing” with other actors.

8. Self-image EGO
Sigmund Freud created a structural model of the human psyche, breaking it into three parts: the id, the ego, and the super-ego. The id is that part of the psyche containing the basic instinctual drives. The ego seeks to please the id by causing realistic behavior that benefits the individual. The super-ego almost has a parental role, contradicting the id by introducing critical thinking and morals to behavioral choices.

11. In the year of the Lord, in dates ANNO DOMINI
The designations Anno Domini (AD, “year of Our Lord”) and Before Christ (BC) are found in the Julian and Gregorian calendars. The dividing point between AD and BC is the year of the conception of Jesus, with AD 1 following 1 BC without a year “0” in between. The AD/BC scheme dates back to AD 525, and gained wide acceptance soon after AD 800. Nowadays a modified version has become popular, with CE (Common/Christian Era) used to replace AD, and BCE (Before the Common/Christian Era) used to replace BC.

13. Layered haircut SHAG
A shag cut is a layered hairstyle. Meg Ryan was famous for wearing a shag cut for many years.

29. Wombs UTERI
The Latin “uterus” (plural “uteri”) translates as both “womb” and “belly”. The Latin word was derived from the Greek “hystera” also meaning womb, which gives us the words “hysterectomy”, and “hysterical”.

31. Inept waiter’s comeuppance NO TIP
To receive one’s “comeuppance” is to get one’s just deserts, an unpleasant consequence for one’s actions. The term likely comes from the concept of being told to “come up” to a higher authority for judgment.

43. Animation frame CEL
In the world of animation, a cel is a transparent sheet on which objects and characters are drawn. In the first half of the 20th century the sheet was actually made of celluloid, giving the “cel” its name.

45. Seoul-based Soul maker KIA
The Kia Soul is a compact car produced in South Korea, although it was designed by Kia here in the US, in Irvine, California. Yep, the Kia Soul is made in Seoul …

46. Minimum age for a U.S. senator THIRTY
The US Constitution defines the minimum age to hold certain federal offices. A person must be at least 35 to be President or Vice President, 30 to be a US Senator, and 25 to be a member of the US House of Representatives. The youngest people to hold these offices were:

47. Jewish wedding dance HORA
The hora is a circle dance that originated in the Balkans. It was brought to Israel by Romanian settlers, and is often performed to traditional, Israeli folk songs. The hora (also horah) is a regular sight at Jewish weddings.

59. Wedding page word NEE
“Née” is the French word for “born” when referring to a female. The male equivalent is “né”.

61. Pretoria’s land: Abbr. RSA
Pretoria is the executive capital of the Republic of South Africa (RSA), one of three capital cities in the country. Cape Town is the legislative capital, and Bloemfontein is the judicial capital.