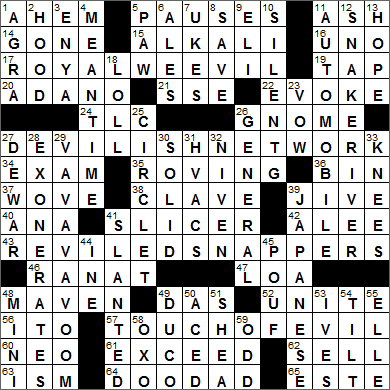 CROSSWORD SETTER: Jeffrey Wechsler
THEME: Touch of Evil … each of today’s themed answer is a common phrase, but with EVIL inserted:

Today’s Wiki-est, Amazonian Googlies
Across
15. Potassium hydroxide, e.g. ALKALI
The “opposite” of an acid is a base. Acids turn litmus paper red, and bases turn it blue. Acids and bases react with each other to form salts. An important subset of the chemicals called bases are the alkalis, the hydroxides of the alkali metals and of ammonium. The term “alkali” is sometimes used interchangeably with “base”, especially if that base is readily soluble in water.

17. Threat to the queen’s cotton? ROYAL WEEVIL (“royal ‘we’” + “evil”)
A weevil is a small beetle, known for the damage that it can do to crops. The boll weevil damages cotton plants by laying eggs inside cotton bolls. The young weevils then eat their way out. Some weevils have snouts that are as long as their body.

The royal “we” is more correctly called the majestic plural, and is the use of a plural pronoun to describe a single person in a high office. I suppose the most often quoted phrase that uses the majestic plural is, “We are not amused”, often attributed to Queen Victoria.

20. Hersey’s “A Bell for __” ADANO
“A Bell for Adano” is a novel written by John Hersey. Hersey’s story is about an Italian-American US Army officer, Major Joppolo, who found a replacement for a town’s bell stolen by fascists. “A Bell for Adano” was made into a film in 1945, the same year the novel won a Pulitzer.

40. 39-Down carrier ANA
(39D. About 125 million people JAPANESE)
All Nippon Airways (ANA) is a Japanese airline, second in size only to Japan Airlines (JAL).

42. Protected at sea ALEE
“Alee” is the direction away from the wind. If a sailor points into the wind, he or she is pointing “aweather”.

43. Really unpopular fish? REVILED SNAPPERS (“red snappers” + “evil”)
The red snapper that we get in restaurants is often not the true “red snapper” species (Lutjanus campechanus). Frequently we are served other species of snapper or rockfish, in order to meet the high demand.

47. Mauna __ LOA
Mauna Loa on the “big island” of Hawaii is the largest volcano on the planet (in terms of volume). The name “Mauna Loa” is Hawaiian for “Long Mountain”.

48. Expert MAVEN
I’ve always loved the word “maven”, another word for an expert. Maven comes into English from the Yiddish “meyvn” meaning someone who appreciates and is a connoisseur.

49. “__ Kapital” DAS
“Das Kapital” (entitled “Capital” in English versions) is a book about political economy written by Karl Marx, first published in 1867. The book is in effect an analysis of capitalism, and proffers the opinion that capitalism relies on the exploitation of workers. Marx concludes that the profits from capitalist concerns come from the underpaying of labor.

57. 1958 Orson Welles film noir … and a hint to 17-, 27- and 43-Across TOUCH OF EVIL
“Touch of Evil” is a 1958 film noir that is very much Orson Welles project. Welles wrote the screenplay, directed the film and co-starred. Other stars are Charlton Heston and Janet Leigh, with Marlene Dietrich supporting. Apparently Welles got the directing job at the behest of Heston (Be-hest … Heston … laugh, everyone!).

62. Bear’s cry SELL
The terms “bull” and “bear” markets come from the way in which each animal attacks. A bull thrusts his horns upwards (an “up” market), whereas a bear swipes with his paws downward (a “down” market).

65. Town near Padua ESTE
Este is a town in the Province of Padua in the north of Italy. The town gave its name to the House of Este, a European princely dynasty. The House of Hanover that ruled Britain from 1714 to 1901, when Queen Victoria died, was perhaps the most notable branch of the House of Este.

– The Taj Mahal: the famous mausoleum built in memory of Mumtaz Mahal.
– Agra Fort: the site where the famous Koh-i-Noor diamond was seized.
– Fatehpur Sikri: a historic city that’s home to well-preserved Mughal

3. Irish musician with four Grammys ENYA
Enya’s real name is Eithne Ní Bhraonáin, which can translate from Irish into Enya Brennan. Her Donegal family (in the northwest of Ireland) formed a band called Clannad, which included Enya. In 1980 Enya launched her very successful solo career, eventually becoming Ireland’s best-selling solo musician. And, she sure does turn up a lot in crosswords!

7. Oahu entertainers UKES
The ukulele (“uke”) originated in the 1800s and mimicked a small guitar brought to the Hawaiian Islands by Portuguese immigrants.

10. 26-Across feature SILENT G
(26A. Subject of the first picture in Mussorgsky’s “Pictures at an Exhibition” GNOME)
The letter G in the word “gnome” is silent.

12. Part of Oregon’s border SNAKE RIVER
The Snake River in the US northwest is the largest tributary of the Columbia River.

13. Last thing in Pandora’s box HOPE
In Greek mythology, Pandora was the first woman. Pandora was created by the gods, with each god bestowing on her a gift. Her name can be translated from Greek as “all-gifted”. Pandora is famous for the story of “Pandora’s Box”. In actual fact, the story should be about Pandora’s “Jar” as a 16th-century error in translation created a “box” out of the “jar”. In the story of Pandora’s Box, curiosity got the better of her and she opened up a box she was meant to leave alone. As a result she released all the evils of mankind, just closing it in time to trap hope inside.

25. Round ornament CIRCLET
A “circlet” is a ring-shaped ornament, especially one that adorns the head.

27. John of Scotch fame DEWAR
Dewar’s is a blended Scotch whisky introduced in 1846 by John Dewar. Dewar’s White Label is the company’s most popular Scotch, first created in 1899, with a taste that is described as “heather and honey”. Dewar’s also make some single malts, under the labels Aberfeldy 12 and Aberfeldy 21. Today, Dewar’s is owned by Bacardi.

31. Climate control systs. HVACS
The heating, ventilating and air conditioning (HVAC) company called Trane was formed in 1913 by father and son James and Reuben Trane. James was a Norwegian immigrant, and Reuben earned his mechanical engineering degree at the University of Wisconsin.

32. Jewel thief portrayer in “The Pink Panther” NIVEN
The great British actor David Niven is perhaps best known for playing Phileas Fogg in “Around the World in 80 Days” and Sir Charles Litton in “The Pink Panther”. I enjoy so many Niven movies, but my favorite has to “Separate Tables” from 1958, for which he was awarded the Best Actor Oscar. Niven even played the iconic role of James Bond, in the 007 spoof film “Casino Royale” released in 1967.

44. Halogen suffix -INE
The halogens are a group of elements in the periodic table consisting of fluorine, chlorine, bromine, iodine and astatine. The term “halogen” was the name that was originally proposed for chlorine when it was first discovered. When it was passed over in favor of chlorine, the name “halogen” was given to the group of elements to which chlorine belonged.

45. High hair style POUF
The “pouf” is an “updo” type of hairstyle that was popularized in the 18th-century France by Marie Antoinette. The French queen first sported the pouf at the coronation of her husband, Louis XVI. Ladies of the day would often wear many ornaments and decorations in their hair set in a pouf, such as pearls, feathers and even ships.

49. Household glue brand DUCO
Duco is a brand of household cement that was developed by DuPont.

51. __ butter SHEA
“Shea butter” is a common moisturizer or lotion used as a cosmetic. It is a fat that is extracted from the nut of the African shea tree. There is evidence that shea butter was used back in Cleopatra’s Egypt.

The patriotic song “America” is also known by its first line, “My Country, ‘Tis of Thee”. The song was written by Samuel Francis Smith in 1831, and was the de facto national anthem of the country until “The Star-Spangled Banner” was declared the official anthem in 1931. The melody of “My Country, ‘Tis of Thee” is identical with the British national anthem, “God Save the Queen”.

Charles Ives was one of the great classical composers, probably the first American to be so recognized. Sadly, his work largely went unsung (pun!) during his lifetime, and was really only accepted into the performed repertoire after his death in 1954.

58. Good Grips kitchenware brand OXO
The OXO line of kitchen utensils is designed to be ergonomically superior to the average kitchen too. The intended user of OXO products is someone who doesn’t have the normal range of motion or strength in the hands e.g. someone suffering from arthritis.

59. “They say there is divinity in __ numbers”: Falstaff ODD
In William Shakespeare’s “The Merry Wives of Windsor”, Falstaff has the lines:

This is the third time; I hope good luck lies in odd numbers. Away I go. They say there is divinity in odd numbers, either in nativity, chance, or death. Away!

Sir John Falstaff is the lead character in Shakespeare’s “The Merry Wives of Windsor” and a supporting character in the two “Henry IV” plays. Falstaff is a self-promoting, obese and cowardly man. In “King Henry IV, part I”, Falstaff refers to his portly size, saying, “thou seest I have more flesh than another man, and therefore more frailty.”