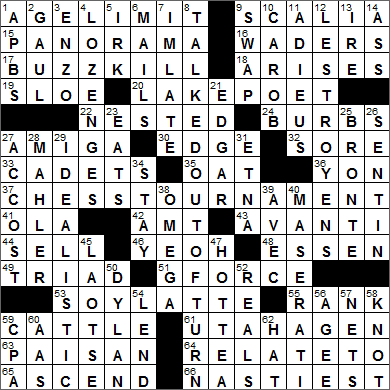 Today’s Wiki-est, Amazonian Googlies
Across
9. “Making Your Case: The Art of Persuading Judges” co-author SCALIA
Antonin Scalia was appointed to the Supreme Court by President Reagan in 1986, and is now the longest-serving member of the court. Justice Scalia’s minority opinions are known for the scathing language that he uses to criticize the Court’s majority.

19. Purplish fruit SLOE
The sloe is the fruit of the blackthorn bush, and the main flavoring ingredient in sloe gin.

20. Robert Southey, notably LAKE POET
The Lake Poets were a group of Romantic poets who lived in the Lake District of northern England in the late 1700s and early 1800s. The three most prominent members of the group were William Wordsworth, Samuel Taylor Coleridge and Robert Southey.

Robert Southey was perhaps the least well-known of the three main Lake Poets, the others being William Wordsworth and Samuel Taylor Coleridge. The Lake Poets were a group of Romantic poets who lived in the Lake District of northern England in the late 1700s and early 1800s. Southey was also a prolific biographer, publishing books about the lives of John Bunyan, Oliver Cromwell, Horatio Nelson and other. He was England’s Poet Laureate for three decades, until his death in 1843.

O Were my love yon lilac fair,
Wi’ purple blossoms to the spring,
And I a bird to shelter there,
When wearied on my little wing;
How I wad mourn when it was torn
By autumn wild and winter rude!
But I wad sing on wanton wing
When youthfu’ May its bloom renew’d.

37. Mating setting CHESS TOURNAMENT
In the game of chess, when the king is under immediate threat of capture it is said to be “in check”. If the king cannot escape from check, then the game ends in “checkmate” and the player in check loses. In the original Sanskrit game of chess, the king could actually be captured. Then a rule was introduced requiring that a warning be given if capture was imminent (today we announce “check!”) so that an accidental and early ending to the game doesn’t occur.

43. Forward, in Firenze AVANTI
Florence is the capital city of the Tuscany region in Italy. Something from or related to Florence is described as “Florentine”. The city is known as “Firenze” in Italian.

46. Michelle of “Crouching Tiger, Hidden Dragon” YEOH
Michelle Yeoh is an actress from Malaysia who appeared in several Hong Kong action films in which she did her own stunts and martial arts scenes. Her most famous performance was in the 2000 movie “Crouching Tiger, Hidden Dragon”, although I best know her for playing opposite Pierce Brosnan in the Bond film “Tomorrow Never Dies”.

48. Zollverein Industrial Complex city ESSEN
The Zollverein Industrial Complex is a former coal mine in the city of Essen, Germany. The mine closed in 1986, and the nearby coking plant ceased operations in 1993. After closure, one of the shafts (Shaft 12) was declared a heritage site and is now toured by visitors. Shaft 12 has been described as the “most beautiful coal mine in the world”.

49. Set of closely related notes TRIAD
A triad is a group of three, and specifically in music is a chord is made up of three notes.

51. Measure of concern for aerobatic pilots G-FORCE
The force of gravity that we all feel is referred to as “one G”. As gravity is a actually an accelerating force, acceleration is measured relative to that force of gravity. So, if we are sitting in a vehicle that accelerates at 3G, then we are experiencing a force that is three times that which we feel from the gravitational pull of the earth. Zero-G is weightlessness that is experienced when in space, outside the influence of the earth’s gravity.

53. Starbucks order SOY LATTE
The term “latte” is an abbreviation of the Italian “caffelatte” meaning “coffee (and) milk”. Note that in the correct spelling of “latte”, the Italian word for milk, there is no accent over the “e”. An accent is often added by mistake when we use the word in English, perhaps meaning to suggest that the word is French.

59. __ call CATTLE
Mass auditions for less experienced actors are often referred to as “cattle calls”. The term is used because the aspiring thespians are usually all herded into one large room to await their turn on stage.

61. “Respect for Acting” writer UTA HAGEN
Uta Hagen was a German-born American actress. Hagen married Jose Ferrer in 1938, but they were divorced ten years later after it was revealed that she was having a long-running affair with Paul Robeson. Her association with Robeson, a prominent civil rights activist, earned her a spot on the Hollywood Blacklist during the McCarthy Era. This forced her away from film, but towards a successful stage career in New York City.

“Respect for Acting” is a textbook used in acting classes that was written by actress and teacher Uta Hagen and first published in 1973. Hagen published a follow-up textbook in 1991 called “Challenge for the Actor”.

Down
1. BOLO equivalents APBS
A BOLO is a police alert, an acronym standing for “be on the look-out”. A BOLO can also be called an APB, an “all-points bulletin”.

2. Caesarean section? GAUL
The Gauls were a Celtic race, with Gaul covering what is now known as France and Belgium. We use the term “Gallic” today, when we refer to something pertaining to France or the French.

Supposedly, when Julius Caesar marched back to Rome from Gaul, as he defiantly “crossed the Rubicon” with his army, he uttered the words “Alea iacta est” (“The die is cast”).

3. Footwear designer Angiolini ENZO
Enzo Angiolini was a designer of shoes in Florence, Italy and Manhattan, New York. Angiolini passed away in 1993, but his brand lives on.

4. Pharmacy buys LOZENGES
Back in the 14th century, a “lozenge” was a diamond shape. The original lozenges, which were tablets held in the mouth to dissolve, had this diamond shape and hence the name.

10. Evergreen with edible pods CAROB
The carob is a tree or shrub in the pea family, mainly grown for its seed pods. The carob seeds are dried or roasted, and when powdered or chipped make a good substitute for chocolate.

12. Berlioz opera based on the “Aeneid” LES TROYENS
“Les Troyens” (The Trojans) is a grand opera by Hector Berlioz based on Virgil’s epic poem the “Aeneid”. “Les Troyens” was Berlioz’s magnum opus. Sadly, he never got to see it performed.

13. Land where hurling reportedly originated: Abbr. IRE
Hurling is the national sport of my homeland of Ireland. It’s played with a stick called a hurley and a ball called a “sliotar”. It’s thought to be the fastest team sport in the world, and certainly has to be the oldest as it predates Christianity and was brought to Ireland by the Celts.

23. “Good __”: Alton Brown show EATS
Alton Brown is a celebrity chef who is behind the Food Network show “Good Eats”, and the host of “Iron Chef America”.

27. Buttonhole ACCOST
“To buttonhole” someone is to detain them in conversation. Our contemporary term evolved from the 18th-century “to button-hold”. One might imagine holding someone by the coat button to detain him or her.

28. Composer of an incomplete Tenth Symphony MAHLER
I’m still trying to keep an open mind when it comes to the music of Gustav Mahler, but I find it hard to appreciate. Mahler was an Austrian composer, active in the late-Romantic period. During his own lifetime he was most notable as a conductor, and his compositions gained in popularity only after his death in 1911. Mahler’s music was banned as “degenerate” during the Nazi Era, as Mahler was Jewish.

When Gustav Mahler died in 1911, he left his final work unfinished. The “Symphony No. 10” was relatively complete, in the form of a draft, but was not orchestrated. Several composers have “completed” the work, most notably British musician Deryck Cooke in the sixties.

31. Site of Vulcan’s workshop ETNA
Our word “volcano” comes from “Vulcano”, the name of a volcanic island off the coast of Italy. The island’s name comes from Vulcan, the Roman god of fire. The Romans believed that the island of Vulcano was the chimney of the forge belonging to the god Vulcan. The Romans also believed that the eruptions on Mount Etna in Sicily were caused by Vulcan getting angry and working his forge so hard that sparks and smoke flew out of the top of the volcano.

38. 007’s watch since 1995 OMEGA
Omega is a manufacturer of high-end watches based in Switzerland. An Omega watch was the first portable timepiece to make it to the moon.

40. Car with a trident emblem MASERATI
Maserati is a manufacturer of luxury cars in Italy. The company was founded in Bologna in 1914 by five brothers: Alfieri, Bindo, Carlo, Ettore and Ernesto Maserati. The company uses a trident logo that is based on the trident depicted in the Fountain of Neptune in the Piazza Maggiore in Bologna.

47. Spot in the afternoon HOT TEA
The reference here is to the oft quoted English phrase “a spot of tea”. Mind you, I’ve only ever heard that said in jest …

56. Miracle Mets star AGEE
Tommie Agee was a Major League Baseball player who played mainly with the Indians, White Sox and Mets. He was one of the “Amazin’ Mets”, and was famous for making two phenomenal catches in game three of the 1969 world series, potentially saving five runs.

62. Outline in the Arby’s logo HAT
The Arby’s chain of fast food restaurants was founded in 1964 by two brothers, Forrest and Leroy Raffel. The name “Arby’s” is a homonym of “RB’s”, standing for “Raffel Brothers”.