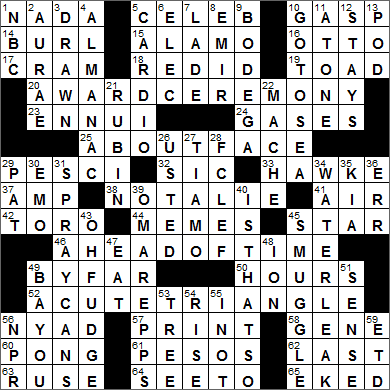 CROSSWORD SETTER: Tom Uttormark & C.C. Burnikel,
THEME: A-New Interpretation … today’s themed answers are common phrases starting with the letter A. Each phrase has been reinterpreted for the clue, using that letter A as an indefinite article:

Today’s Wiki-est, Amazonian Googlies
Across
1. Nothing, in Nogales NADA
Nogales (properly called “Heroica Nogales”) is a city in the Mexican State of Sonora. Nogales lies right on the Mexico-US border, opposite the city of Nogales, Arizona.

14. “The Big Country” Oscar winner Ives BURL
As well as being an actor, Burl Ives was a folk singer, which was his original calling. In Hollywood he had a distressing experience with the House Unamerican Activities Committee and avoided being blacklisted by cooperating to some level with McCarthy and his team. This cooperation created a rift between him and Pete Seeger in particular, a fellow singer whom he “discussed” with the committee.

“The Big Country” is a 1958 western with a star-studded cast including Gregory Peck, Jean Simmons, Charlton Heston and Burl Ives. The film earned Burl Ives an Oscar as Best Supporting Actor.

15. Hertz competitor ALAMO
The third largest car rental company right now is Alamo, a relative newcomer founded in 1974. Alamo made inroads (pun intended!) into the market by popularizing the idea of “unlimited mileage”.

The Hertz car rental company was started in 1918 by Walter L. Jacobs in Chicago. He began with just twelve model T Ford cars available for rent. In 1923, the car rental operation was bought out by John D. Hertz who incorporated it into his truck and coach manufacturing company.

16. Germany’s von Bismarck OTTO
Germany first became a country of her own in 1871 when the Princes of the various independent German states met at Versailles outside Paris to proclaim Wilhelm of Prussia as the Emperor of the German Empire. The man behind this historic development was Wilhelm’s Ministerpräsident, Otto von Bismarck. Von Bismarck was a powerful figure in Prussia and indeed on the world stage, earning him the nickname of the “Iron Chancellor”.

20. One hospital celebration? A WARD CEREMONY (from “award ceremony”)
The Old English “weard” was used for a protection or guarding, or the persion carry out that protection. The sense of guardianship evolved into our “ward”, used for administrative disctricts back in the late 1500s. The usage was extended to rooms in a hospital in the mid 1700s.

23. The blahs ENNUI
“Ennui” is the French word for boredom, a word that we now use in English. It’s one of the few French words we’ve imported that we haven’t anglicized and actually pronounce “correctly”.

24. Radon and ozone GASES
Radon is a radioactive gas, a byproduct produced when uranium decays naturally in the earth. Radon gas can collect and accumulate in buildings and rooms that are particularly well insulated with very little air exchange. The danger is very real, as radon is listed as the second most frequent cause of lung cancer after cigarette smoke.

Ozone gets its name from the Greek word ozein, meaning “to smell”. It was given this name as ozone’s formation during lightning storms was detected by the gas’s distinctive smell. Famously, there is a relatively high concentration of the gas in the “ozone layer” in the Earth’s stratosphere. This ozone layer provides a vital function for animal life on the planet as it absorbs most of the sun’s UV radiation. A molecule of ozone is made up of three oxygen atoms, whereas a “normal” oxygen has just two atoms.

25. One mug from the boxing ring? A BOUT FACE (from “about-face”)
The verb “to mug” means to make an exaggerated facial expression. The term comes from mugs used to drink beer (called Toby mugs) that are the made in the shape of heads with grotesque expressions. “Mug” can also be a noun meaning “face”.

29. Joe of “Casino” PESCI
Joe Pesci got his big break in movies with a supporting role in “Raging Bull” starring Robert De Niro, earning Pesci an Oscar nomination early in his career. There followed a string of gangster roles played alongside De Niro, namely “Once Upon a Time in America”, “Goodfellas” and “Casino”. But I like Pesci’s comedic acting best of all. He was marvelous in the “Home Alone” films, the “Lethal Weapon” series, and my personal favorite, “My Cousin Vinny”. Pesci gets a mention in the stage musical “Jersey Boys”, which isn’t too surprising as he is one of the show’s producers.

32. [Not my typo] SIC
“Sic” indicates that a quotation is written as originally found, perhaps including a typo. “Sic” is Latin for “thus, like this”. The term is more completely written as “sic erat scriptum”, which translates as “thus was it written”.

33. Ethan of “Before Midnight” HAWKE
Ethan Hawke is a Hollywood actor who made his breakthrough in a supporting role in “Dead Poet’s Society”, playing opposite Robin Williams. Hawke was married to Uma Thurman, with whom he has two children.

42. “Count on it” lawnmower brand TORO
Toro is a manufacturer of mainly lawn mowers and snow removal equipment based in Bloomington, Minnesota. The company was started in 1914 to build tractor engines.

44. Fast-spreading Internet phenomena MEMES
A “meme” (short for “mineme”) is a cultural practice or idea that is passed on verbally or by repetition from one person to another. The term lends itself very well to the online world where links, emails, files etc. are so easily propagated.

45. Michelin rating unit STAR
Michelin is a manufacturer of tires based in France. The company was founded by brothers Édouard and André Michelin in 1888. The brothers were running a rubber factory at the time, and invented the world’s first removable pneumatic tire, an invention that they used to launch their new company. Michelin is also noted for rating restaurants and accommodation in its famous Michelin Travel Guides, awarding coveted Michelin “stars”.

46. One news magazine managing editor? A HEAD OF “TIME” (from “ahead of time”)
“Time” magazine has a readership of about 25 million, making it the largest circulation weekly news magazine in the world.

56. Long-distance swimmer Diana NYAD
Diana Nyad is a long-distance swimmer. Nyad holds the distance record for a non-stop swim without a wet-suit, a record that she set in 1979 by swimming from Bimini to Florida. In 1975 she became the fastest person to circle Manhattan in a swim that lasted 7 hours 57 minutes. More recently, in 2013, she became the first person to swim from Cuba to Florida without the protection of a shark cage. She was 64 years old when she made that swim!

58. Hereditary code carrier GENE
A gene is a section of a chromosome that is responsible for a particular characteristic in an organism. For example, one gene may determine eye color and another balding pattern. We have two copies of each gene, one from each of our parents, with each copy known as an allele.

61. Cozumel cash PESOS
Cozumel is an island in the Caribbean of the coast of the Yucatán Peninsula in Mexico. It is a tourist destination, and is especially attractive to scuba divers. My son and I spent a great week there diving some years ago.

4. Annually updated reference ALMANAC
A nautical almanac is a book used by navigators, usually at sea. The main content has traditionally been tables of star position designed to help determine one’s geographical position. Some almanacs also include tide tables.

5. Pulse-boosting exercise, for short CARDIO
Aerobic exercise is moderate activity, designed to be at a low enough intensity that very little anaerobic activity takes place. In other words, the exercise is at a level where oxygen is taken in in order to burn fat and carbohydrate to create energy. Anaerobic exercise is more intense and uses carbohydrate (glycogen) in the muscle to provide energy, without the need for oxygen. Aerobics are also called “cardio” as the exercises strengthen the cardiovascular system.

7. Fill with cargo LADE
The verb “lade” meaning “to load” comes from an Old English word “hladan”. Lade also used to mean “to draw water” and indeed gave us our word “ladle”. So “lade” and “ladle” are close cousins.

8. Qatari bigwig EMIR
In English, emir can also be written as emeer, amir and ameer (watch out for those spellings in crosswords!).

Qatar is a sovereign state in the Middle East occupying the Qatar Peninsula, itself located in the Arabian Peninsula. Qatar lies on the Persian Gulf and shares one land border, with Saudi Arabia to the south. Qatar has more oil and gas reserves per capita of population than any other country in the world. In 2010, Qatar had the fastest growing economy in the world, driven by the petrochemical industry. Qatar is scheduled to who the 2022 FIFA World Cup, although the nation’s eligibility to do so is under question after a far-reaching bribery scandal was uncovered at the sport’s governing body.

9. Hispanic convenience store BODEGA
“Bodega” is the Spanish term for a winery, or these days for a grocery store. One might call a bodega a “ma-and-pa” shop, a “madre-y-padre” shop in Spanish.

22. Papier-__ MACHE
Papier-mâché is an artistic medium made from strips of paper, or pulped paper, that is bound with an adhesive. “Papier-mâché” translates from French as mashed or chewed paper.

27. Words of grande affetto TI AMO
In Italian, one usually says “ti amo” (I love you) with “grande affetto” (much affection).

28. Bass staff symbol F-CLEF
Clef is the French word for “key”. In music, a clef is used to indicate the pitch of the notes written on the stave. The bass clef is also known as the F-clef, and the treble clef is the G-clef.

30. Expressive rock genre EMO
The musical genre of “emo” originated in Washington D.C. in the 80s, and takes its name from “emotional hardcore”. “Emo” is also the name given to the associated subculture. Not my cup of tea …

35. Sorento automaker KIA
The Kia Sorento is an SUV.

36. Throw wide of the cutoff man, say ERR
That would be in baseball …

47. Nosh EAT
Our word “nosh” has been around since the late fifties, when it was imported from the Yiddish word “nashn” meaning “to nibble”. We use “nosh” as a noun that means snack, or as a verb meaning to eat between meals.

49. Louisiana wetland BAYOU
A bayou is a marshy inlet or outlet of a lake or river, usually with stagnant or slow-moving water. The exact origins of the term “bayou” is uncertain, but it is thought perhaps to come from the Choctaw (a Native American people from the southeast) word “bayuk”, meaning “small stream”.