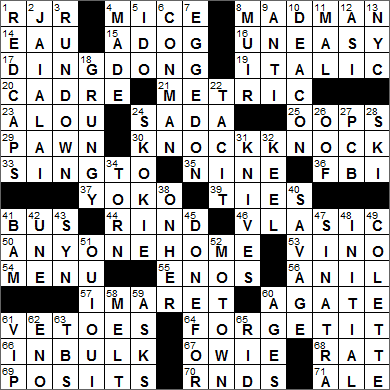 CROSSWORD SETTER: Matt Skoczen
THEME: Let Me In … our themed answers today describe what happens to a visitor trying to get into an empty abode:

Today’s Wiki-est, Amazonian Googlies
Across
1. Big initials in tobacco RJR
The R.J. Reynolds Tobacco Company (RJR) was founded by Richard Joshua “R. J.” Reynolds. Reynolds founded his business in Winston-Salem, North Carolina in 1875. The company employed nearly 30,000 people in the area at its peak, but now has fewer than 3,000 employees locally.

4. Devices with scroll wheels MICE
The first computer mouse was invented at the Stanford Research Institute in 1963, by one Douglas Engelbart. Sadly for him, his patent ran out before mice became standard equipment on computers, so he never made any money from his amazing invention.

19. Emphatic type ITALIC
Italic type leans to the right. The style is known as “italic” because the stylized calligraphic form of writing originated in Italy, probably in the Vatican.

20. Training group CADRE
A “cadre” is most commonly a group of experienced personnel at the core of a larger organization that the small group trains or heavily influences. “Cadre” is a French word meaning a “frame”. We use it in the sense that a cadre is a group that provides a “framework” for the larger organization.

23. Baseball family name ALOU
Jesus Alou played major league baseball, as did his brothers Matty and Felipe, and as does Felipe’s son Moises.

24. Actress Thompson of “Family” SADA
Sada Thompson was an actress from Des Moines, Iowa. Thompson is best known for playing the mother and wife in the eighties television drama series called “Family”.

29. Queen-to-be, maybe PAWN
In the game of chess, the pawns are the weakest pieces on the board. A pawn that can make it to the opposite of the board can be “promoted” to a piece of choice, usually a queen. Using promotion of pawns, it is possible for a player to have two or more queens on the board at one time. However, standard chess sets come with only one queen per side, so a captured rook is often used as the second queen by placing it on the board upside down.

36. Justice Dept. division FBI
What we know today as the FBI was set up in 1908 as the BOI, the Bureau of Investigation. The name was changed to the Federal Bureau of Investigation in 1935. The Bureau was set up at the behest of President Theodore Roosevelt. President Roosevelt was largely moved to do so after the 1901 assassination of President McKinley, as there was a perception that anarchists were threatening law and order. The FBI’s motto uses the organization’s initialism, and is “Fidelity, Bravery, Integrity”.

37. Sean’s mom YOKO
Sean Taro Ono Lennon is the only child of John Lennon and Yoko Ono. Sean’s godfather is Elton John. Sean is a musician and composer, and has a band called the Ghost of a Saber Tooth Tiger.

39. Unlikely Monopoly outcomes TIES
The commercial game of Monopoly is supposedly a remake of “The Landlord’s Game” created in 1903 by a Quaker woman called Lizzie Phillips. Phillips used her game as a tool to explain the single tax theory of American economist Henry George. The Landlord’s Game was first produced commercially in 1924. The incredibly successful derivative game called Monopoly was introduced in 1933 by Charles Darrow, who became a very rich man when Parker Brothers bought the rights to the game just two years later in 1935.

46. “Big crunch” pickle brand VLASIC
Apparently Vlasic invented the glass-packed, shelf-stable pickle. The company adopted the stork mascot in the late sixties, with the stork originally carrying a baby. The mascot was a play on the perception that pregnant women have a higher than average appetite for pickles.

56. Indigo source ANIL
Anil is another name for the indigo plant, as well as the name for the blue indigo dye that is obtained from it. The color of anil is relatively close to navy blue. The main coloring agent in indigo dye is a crystalline powder called indigotin.

57. Ottoman shelter IMARET
Imarets were inns or hostels used by pilgrims throughout the Ottoman Empire. The network of imarets was set up to provide food to anyone in need, so also served as “soup kitchens”.

61. Nixes VETOES
“Veto” comes directly from Latin and means “I forbid”. The word was used by tribunes of Ancient Rome to indicate that they opposed measures passed by the Senate.

69. Assumes to be true POSITS
“To posit” is to assume as fact, to lay down as a “position”.

71. Porter kin ALE
Porter is a dark beer that originated in London in the 1700s and is named for the street and river porters with whom it was very popular. Porter is a well-hopped beer made using brown malt, which gives it the dark color.

Down
1. Baggage handlers REDCAPS
“Redcap” is a term used for a railroad station porter here in North America. That term comes from the fact that redcaps wear red caps!

2. Game with cestas and pelotas JAI ALAI
The essential equipment in the sport of jai alai is the pelota (ball) and the cesta (wicker scoop).

3. Seedy RUN-DOWN
(18D. Seedy GRUNGY)
We use the word “seedy” to mean “shabby”. The usage probably arose from the appearance of a flowering plant that has gone to seed.

7. Stirred up EGGED ON
The verb “to egg on”, meaning “to goad”, has nothing to do with birds’ eggs. Rather, the term evolved from “to edge on”, to move forward a small amount.

8. Conservationist John MUIR
John Muir was a famous American naturalist, although he was born in Scotland. He published “My First Summer in the Sierra” in 1911, describing one of his favorite places in the country, the Sierra Nevada range in California. Muir was a co-founder of the Sierra Club.

13. B’way setting NYC
Broadway really is, and always has been, the Main Street of New York City. It started out as the Wickquasgeck Trail that was trampled into the Manhattan brush land by the Native Americans of the area. In the days of the Dutch, the trail became the main road though the island of Manhattan, down to the New Amsterdam settlement in the south. The Dutch described it as a “Breede weg”, a broad street or broad way. The name Broadway was adopted as the official name for the whole thoroughfare in 1899 … on Valentine’s Day.

24. Chicago suburb SKOKIE
The Chicago suburb of Skokie was incorporated in 1888 under the name Niles Center. The name was changed in 1940 to Skokie, which comes from a Potawatomi word for “marsh”.

27. Banned chem. contaminant PCB
Polychlorinated biphenyls (PCBs) were banned with good reason. Apart from their link to cancer and other disorders in humans and animals, they are extremely persistent in the environment once contamination has occurred. Among other things, PCBs were used as coolants and insulating fluids in electrical gear such as transformers and large capacitors.

31. Sushi chef’s array KNIVES
Sushi is a Japanese dish that has as its primary ingredient cooked, vinegared rice. The rice is usually topped with something, most often fish, and can be served in seaweed rolls. If you want raw fish by itself, then you have to order “sashimi”.

38. “Rings __ Fingers”: 1942 Fonda/Tierney film ON HER
“Rings on Her Fingers” is a 1942 comedy film about a department store salesgirl (played by Gene Tierney) who is asked to impersonate a society belle. The heroine falls for a hard-working accountant (played by Henry Fonda). I don’t think I’ve seen this one, but I’m putting it on the list as I do love screwball comedies …

47. Ol’ Blue Eyes SINATRA
Frank Sinatra was the only child of Italian immigrants living in Hoboken, New Jersey. Like so many of our heroes, Sinatra had a rough upbringing. His mother was arrested several times and convicted of running an illegal abortion business in the family home. Sinatra never finished high school, as he was expelled for rowdy conduct. He was later arrested as a youth on a morals charge for carrying on with a married woman, which was an offence back then. But Sinatra straightened himself out by the time he was twenty and started singing professionally.

In 1973, Frank Sinatra came out of retirement with a TV special and an album called “Ol’ Blue Eyes is Back”. The nickname stuck.

49. “Gigi” author COLETTE
The best known work of French novelist Sidonie-Gabrielle Colette is “Gigi”, the source material for the wonderful film starring Leslie Caron in the title role. The novel that brought Colette celebrity was published in 1920, called “Cheri”. “Gigi” followed much later, in 1944. “Cheri” was adapted into a screen version starring Michelle Pfeiffer. Colette led a very colorful life. She had three marriages, an affair with her stepson, and many affairs with other women.

52. Four Tops’ record label MOTOWN
Motown Records is a record label that was founded in 1959 in Detroit (aka “Motor City” or “Motown”). The founder of Motown records was Berry Gordy, Jr.

62. Brian of Roxy Music ENO
Brian Eno is a musician, composer and record producer from England who first achieved fame as the synthesiser player with Roxy Music. As a producer, Eno has worked with David Bowie, Devo and U2.

63. Airer of some MLB postseason games TBS
The tbs cable television station started out in 1967 as local broadcast TV station in Atlanta. The station’s first call letters were WJRJ-TV, and this was changed to WTCG in 1970 when it was acquired by Ted Turner (the TCG stood for Turner Communications Group). In 1976, Turner started distributing WTCG via satellite making its programming available in other parts of the country. WTCG was only the second channel to transmit via satellite, following HBO. The difference was that WTCG was broadcast without requiring a premium subscription. The station’s call sign was changed again in 1979, to WTBS, and in 1981 adopted the moniker “Superstation WTBS”.