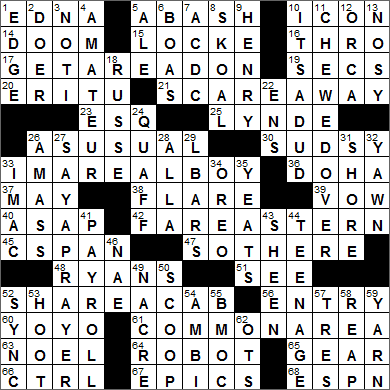 CROSSWORD SETTER: Bruce Haight
THEME: Common Area … each of today’s has something in COMMON; they all contain the hidden word AREA:

61A. Group space, and a hint to the answers to starred clues COMMON AREA

17A. *Figure out, as someone’s poker strategy GET A READ ON
21A. *Frighten off SCARE AWAY
33A. *Disney film cry of discovery I’M A REAL BOY
42A. *Chinese, say FAR-EASTERN
52A. *Ride crosstown together, perhaps SHARE A CAB

Today’s Wiki-est, Amazonian Googlies
Across
1. Mrs. Garrett on “The Facts of Life” EDNA
Charlotte Rae is an American actress, best known for playing the character Edna Garrett on two sitcoms from the seventies and eighties: “Diff’rent Strokes” and “The Facts of Life”. Towards the end of the series, the Edna Garrett character operated her own gourmet food shop called “Edna’s Edibles”.

10. Twitter’s bird, e.g. ICON
I have never tweeted in my life, and have no plans to do so (but one should never say “never”). Twitter is a microblogging service that limits any post sent to just 140 characters. In a sense, it is similar to this blog. Here I send out a post once a day containing information that I think might be useful to folks (thank you for reading!). I don’t think I could send out much of interest using just 140 characters.

15. “An Essay Concerning Human Understanding” author LOCKE
John Locke was the English philosopher who postulated that the mind was a blank slate (or “tabula rasa”) and that we fill that slate with our experiences and observations.

20. “Un Ballo in Maschera” aria ERI TU
Every crossword constructors’ favorite aria “Eri tu” is from Verdi’s opera “Un ballo in maschera” (A Masked Ball). The opera tells the story of the assassination of King Gustav III of Sweden during a masked ball.

23. Office suite door letters ESQ
The title “esquire” is of British origin and is used differently today depending on whether one is in the US or the UK. Here in America the term is usually reserved for those practicing the law (both male and female). In the UK, “esquire” is a term of gentle respect reserved for a male who has no other title that one can use. So a mere commoner like me might receive a letter from the bank say, addressed to W. E. Butler Esq.

33. *Disney film cry of discovery I’M A REAL BOY
In the 1940 movie “Pinocchio”, the title character changes from a puppet into a human and declares “I’m a real boy!”

36. Qatar’s capital DOHA
Doha is the capital city of the state of Qatar located on the Persian Gulf. The name “Doha” translates from Arabic as “the big tree”.

37. Fifth of a dozen MAY
The month of May was named after Maia, the Greek goddess of fertility.

38. Solar __ FLARE
A “solar flare” is a sudden energy release from the surface of the Sun that can be perceived as a flash of brightness and an eruption of magnetic energy. That magnetic energy reaches the Earth about two days after the event, and can disrupt long-range radio communications on our planet. The location of solar flares has been strongly linked to sunspot groups, groups of dark spots on the Sun’s surface.

42. *Chinese, say FAR-EASTERN
In geographical terms there are three “Easts”. The Near East and Middle East are terms that are often considered synonymous, although “Near East” tends to be used when discussing ancient history and “Middle East” when referring to the present day. The Near/Middle East encompasses most of Western Asia and Egypt. The term “Far East” describes East Asia (including the Russian Far East), Southeast Asia and South Asia.

45. Place to follow politics C-SPAN
C-SPAN is a privately-funded, nonprofit cable channel that broadcasts continuous coverage of government proceedings. C-SPAN Video Library is an amazing online archive provided by C-SPAN that offers a complete audio and video archive of Congressional proceedings going back to 1987. Users can search the archive for free, by topic, speaker date and more. When the site was launched in 2010, the archive already contained 160,000 hours of programming. There is a is a section of the archive called “Congressional Chronicle” that is particularly easy to navigate.

48. “__ Daughter”: 1970 film RYAN’S
“Ryan’s Daughter” is a 1970 David Lean film about a married woman in Ireland who has an affair with a British army officer in 1916. It is an epic work lasting about 200 minutes, complete with intermission and entr’acte. The impressive cast includes Robert Mitchum, Trevor Howard, John Mills, Leo McKern and Sarah Miles.

60. Go up and down YO-YO
Would you believe that the first yo-yos date back to 500 BC? There is even an ancient Greek vase painting that shows a young man playing with a yo-yo. Centuries later Filipinos were using yo-yos as hunting tools in the 1500s. “Yo-yo” is a Tagalog (Filipino) word meaning “come-come” or simply “return”.

63. Seasonal refrain NOEL
“Noël” is the French word for the Christmas season, ultimately coming from the Latin word for “birth” (natalis). Noel has come to be used as an alternative name for a Christmas carol.

64. Assembly line worker ROBOT
Karel Čapek was a Czech writer noted for his works of science fiction. Čapek’s 1920 play “R.U.R.” is remembered in part for introducing the world to the word “robot”. The words “automaton” and “android” were already in use, but Capek gave us “robot” from the original Czech “robota” meaning “forced labor”. The acronym “R.U.R.”, in the context of the play, stands for “Rossum’s Universal Robots”.

67. Films with many extras EPICS
According to the “Guinness Book of World Records”, the record for most extras appearing in a movie is held by 1982’s “Gandhi”. The funeral scene used 300,000 extras, with about two thirds of the crowd being volunteers and the rest paid a small fee.

Down
4. Greenhorn AMATEUR
A “greenhorn” is a young-horned animal, a term that is now applied to any inexperienced person.

The Heavy Metal band known as AC/DC was formed by two brothers in Australia. The group is usually called “Acca Dacca” down under. AC/DC’s first studio album, released in 1975, was whimsically titled “High Voltage”.

8. “Bottoms up!” SKOAL!
Skoal is a Swedish toast, with roots in the old Norse word “skaal” meaning “cup”.

12. Marine threat ORCA
The taxonomic name for the killer whale is Orcinus orca. The use of the name “orca”, rather than “killer whale”, is becoming more and more common. The Latin word “Orcinus” means “belonging to Orcus”, with Orcus being the name for the Kingdom of the Dead.

18. Charlotte __ RUSSE
Charlotte Russe is a cold dessert consisting of Bavarian cream set in a mold layered with ladyfingers. The dessert was named by its creator in honor of Princess Charlotte, daughter of British King George IV, and in honor of Czar Alexander I of Russia (“russe” is French for “Russian”).

33. 1998 Apple debut IMAC
The iMac is a desktop computer platform from Apple introduced in 1998. One of the main features of the iMac is an “all-in-one” design, with the computer console and monitor integrated. The iMac also came in a range of colors, that Apple marketed as “flavors”, such strawberry, blueberry and lime.

34. __ cookies ‘n creme: Jell-O flavor OREO
If you like Jell-O, then you want to stop by LeRoy, New York where you can visit the only Jell-O museum in the world. While at the museum, you can walk along the Jell-O Brick Road …

35. “Leda and the Swan” poet YEATS
In Greek mythology, Leda was the beautiful Queen of Sparta who was seduced by Zeus when he took the form of a swan. Leda produced two eggs from the union. One egg hatched into the beautiful Helen, later to be known as Helen of Troy and over whom the Trojan War was fought. The other egg hatched into the twins Castor and Pollux. Castor and Pollux had different fathers according to the myth. Pollux was the son of Zeus and was immortal, while Castor was the son of Leda’s earthly husband, and so he was a mortal. William Butler Yeats wrote a famous sonnet called “Leda and the Swan” in 1924. Peter Paul Rubens made a copy of a painting called “Leda and the Swan” by Michelangelo, which is now lost.

46. “Fat chance, laddie” NAE
Nae is the Scottish vernacular for “no”.

49. Abalone shell layer NACRE
The strong iridescent material laid down by some mollusks on the inside of their shells is called “nacre”, and nacre is also the material that makes up pearls. The creature lays down nacre as a defensive mechanism, protecting the soft tissue of its body from the rough surface of the outer shell. Similarly, it uses nacre to encapsulate harmful debris or a parasite that penetrates the shell, and that’s how a pearl is formed. Cultured pearls are made by inserting a tissue graft from a donor oyster, around which nacre is laid down.

The large edible sea snails that we call abalone are called “ormer” in the British Isles. The abalone shell resembles a human ear, giving rise to the alternative names “ear shell” and “sea ear”.

54. Prefix with valence AMBI-
The prefix “ambi-” that we use to mean “both” is a Latin word that actually means “around” or “round about”. “Ambivalence” was originally just a psychological term, describing “serious conflicting feelings”. Later it came to mean uncertainty about which course to follow.