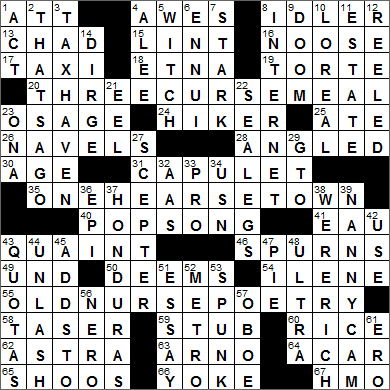 CROSSWORD SETTER: John Lampkin
THEME: Er, Becomes Or, We Hear … each of today’s themed answers is a common phrase with an “er” sound switched to an “or” sound:

20A. Cuisine to swear by? THREE-CURSE MEAL (from “three-course meal”)
35A. Site of a mortician’s monopoly? ONE-HEARSE TOWN (from “one-horse town”)
55A. Ode to a Nightingale? OLD NURSE POETRY (from “Old Norse poetry”)

Today’s Wiki-est, Amazonian Googlies
Across
1. Short one at the bar? ATT
Attorney (att.)

15. Thread bits LINT
“Lint”, meaning “fluff”, is one of those terms that I had to learn when I moved to the US. We call the same thing “fuzz” on the other side of the Atlantic.

16. Running bowline, e.g. NOOSE
As an ex-sailor, I have a thing about knots, and the bowline … it’s one of my favorites. It’s the simple but effective loop knot, the one that’s made by “the frog coming out of the pond, going around the tree, and going back into the pond”. There is also a sliding version called a running bowline.

18. Mediterranean landmark ETNA
Mt. Etna is the largest of three active volcanoes in Italy. Mt Etna is about 2 1/2 times the height of its equally famous sister, Mt. Vesuvius. Etna is home to a 110-km long narrow-guage railway, and two ski resorts.

19. Dessert that just sounds wrong TORTE
A torte is a type of cake made primarily with eggs, sugar and ground nuts (but no flour).

The word “tort” is a French word meaning “mischief, injury or wrong”. Tort law is generally about negligence, when the action of one party causes injury to another but that action falls outside of the scope of criminal law.

23. __ orange OSAGE
The Osage orange is also known as the horse apple, and is a deciduous tree native to North America. The wood of the tree was prized by Native Americans, particularly the Osage nation, who used it to make bows. The Osage Orange was also called “bois d’arc” (meaning “bow-wood”) by early French settlers, a reference to the local usage. This French name was corrupted into “bodark” and “bodarc”, another name for the same tree.

25. Downed a link, say ATE
Link sausages are so called as they can come in chains, with each sausage being a link in that chain.

28. Caught porgy and bass ANGLED
We use the verb “to angle” to mean “to fish” because “angel” was an Old English word for a hook.

Fish belonging to the family Sparidae are called bream or porgies.

30. Ice __ AGE
Ice ages are periods in the Earth’s history when there are extensive ice sheets present in the northern and southern hemispheres. One might argue that we are still in an ice age that began 2.6 million years ago, as evidenced by the presence of ice sheets covering Greenland and Antarctica.

31. Feuding house of Verona CAPULET
William Shakespeare’s “Romeo and Juliet” is all about the love between the two title characters, which is forbidden as the pair come from two families who are sworn enemies. Early in the play, Romeo (a Montague) sneaks into a masquerade ball being held by the Capulets in the hope of meeting a Capulet girl named Rosaline. Instead, he meets and falls for Juliet, also a Capulet. Tragedy ensues …

Verona is a city in northern Italy. Famously, William Shakespeare set three of his plays in Verona: “Romeo and Juliet”, “The Two Gentlemen of Verona” and “The Taming of the Shrew”.

35. Site of a mortician’s monopoly? ONE-HEARSE TOWN (from “one-horse town”)
We use the term “hearse” for a vehicle used to transport a dead body to the place of burial. The original meaning, still used sometimes today, is for a framework hanging over a coffin that holds candles.

40. Swift output POP SONG
Singer Taylor Swift had one of her first gigs at the US Open tennis tournament when she was in her early teens. There she sang the national anthem and received a lot of favorable attention for the performance.

55. Ode to a Nightingale? OLD NURSE POETRY (from “Old Norse poetry”)
The poet John Keats is famous for writing a whole series of beautiful odes. The most renowned are the so-called “1819 Odes”, a collection from the year 1819 that includes famous poems such as “Ode on a Grecian Urn”, “Ode to a Nightingale” and “Ode to Psyche”.

Florence Nightingale is known as the founder of modern nursing. Nightingale worked as a nurse, tending wounded soldiers during the Crimean War. There she became known as “The Lady with the Lamp” as she routinely made her rounds during the night. Not long after returning to London, Nightingale set up the first secular nursing school in the world, at St. Thomas’ Hospital.

58. Shock source TASER
Victor Appleton wrote a novel for young adults called “Tom Swift and His Electric Rifle”. The company that developed the TASER electroshock weapon named its product as a homage to the novel. The acronym TASER stands for “Thomas A. Swift’s Electric Rifle”.

60. Quinoa alternative RICE
Quinoa is a grain crop that is more closely related to beetroots and spinach that it is to cereals and grasses. Quinoa is mainly cultivated for its edible seeds, which are high in protein. The seeds are also gluten free, which seems to be a big deal these days. I do like my quinoa …

63. New Yorker cartoonist Peter ARNO
Peter Arno was a cartoonist from New York who had his work published mainly in “The New Yorker” magazine from 1925 until he passed away in 1968. Arno’s real name was Curtis Arnoux Peters.

66. Linking device YOKE
A yoke is that wooden beam used between a pair of oxen so that they are forced to work together.

Down
3. Green shelter? TAX HAVEN
“Green” is American slang for “money” and is a reference to the green color of the bills (along with black). Green was chosen for the back of US banknotes back during the Civil War, with black being the color on the front. It was felt that the color green was a symbol of stability. This led to the bills being nicknamed “greenbacks”. Ever since then, US banknotes have been printed in green and black, with black being the predominant color on the front, and green on the back.

4. “Hard __!”: captain’s command ALEE
“Alee” is the direction away from the wind. If a sailor points into the wind, he or she is pointing “aweather”.

5. Baker’s neighbor in “Into the Woods” WITCH
“Into the Woods” is Stephen Sondheim musical that premiered in 1986. The storyline uses characters from several fairy tales, including “Little Red Riding Hood”, “Jack and the Beanstalk”, “Rapunzel” and “Cinderella”. The borrowed characters are held together with an underlying original tale about a baker and his wife who long to have a child, but cannot due to a curse placed on them by a witch.

6. Jaded state ENNUI
“Ennui” is the French word for boredom, a word that we now use in English. It’s one of the few French words we’ve imported that we haven’t anglicized and actually pronounce “correctly”.

Our term “jaded”, meaning tired and feeling a little “ho-hum”, comes from the noun “jade” which in the 14th century was an old, worn-out horse.

10. Cosmetics giant L’OREAL
L’Oréal is a French cosmetics company, the largest cosmetics and beauty company in the world.

14. Gloomy air DIRGE
A “dirge” is a slow and mournful musical piece, like a funeral hymn.

21. Shocking swimmer EEL
Electrophorus electricus is the biological name for the electric eel. Despite its name, the electric “eel” isn’t an eel at all, but rather what is called a knifefish, a fish with an elongated body that is related to the catfish. The electric eel has three pairs of organs along its abdomen, each capable of generating an electric discharge. The shock can go as high as 500 volts with 1 ampere of current (that’s 500 watts), and that could perhaps kill a human.

27. Sovereign symbol SCEPTER
A scepter is a ceremonial staff, often held by a monarch.

29. Bygone muscle car GTO
The Pontiac GTO was produced by GM from 1964 to 1974, and again by a GM subsidiary in Australia from 2004 to 2006. The original GTO’s design is credited to Pontiac chief engineer at the time John DeLorean, who later was found the DeLorean Motor Company.

32. Small juice sources? AAS
Those would be AA batteries.

36. Prefix for a lifesaving “Pen” EPI-
EpiPen is a brand name of epinephrine auto-injector. An EpiPen delivers a measured dose of epinephrine, usually for the treatment of an allergic reaction.

37. Mosquito Coast country HONDURAS
The Mosquito Coast was the name given to an area along the east coast of Central America, an area in present-day Honduras and Nicaragua. The name has nothing to with the insect, and instead is derived from the local Miskito people.

39. Concerned parent’s installation NANNY CAM
I think that it is legal to record video with a hidden camera, at least to monitor the behavior of a caregiver in your home. Apparently there is also a law that prohibits the recording of audio. So, “nanny cams” are sold without audio capability. But (disclaimer) that’s just what I read, so don’t take my word for it!

43. Mandated amounts QUOTAS
A “quota” is an allotment, a term originally used with reference to the number of soldiers of quantity of supplies required from a particular town or district.

47. Sales meeting metaphor PIE
A “pie chart” can also be referred to as a “circle graph”.

53. Spirit SPUNK
We’ve been using the word “spunk” to mean “pluck, courage” since the late 1700s. Prior to that it was a Scottish word meaning “spark” that we absorbed into English.

56. Emperor famous for playing an instrument that hadn’t been invented yet NERO
The Great Fire of Rome raged for five and a half days in 64 AD. Of the fourteen districts of Rome, three were completely destroyed and seven more suffered serious damage. The emperor at the time was of course Nero, although reports that he fiddled, played his lyre or sang while the city burned; those accounts are probably not true. In fact, Nero was staying outside of Rome when the fire started and rushed home on hearing the news. He organized a massive relief effort, throwing open his own home to give shelter to many of the citizens who were left living on the street.

57. Wind in the reeds OBOE
The oboe is perhaps my favorite of the reed instruments. The name “oboe” comes from the French “hautbois” which means “high wood”. When you hear an orchestra tuning before a performance you’ll note (pun intended!) that the oboe starts off the process by playing an “A”. The rest of the musicians in turn tune to that oboe’s “A”.

61. Ranch closing? -ERO
A ranchero is someone employed on a ranch, and is a word with Spanish roots.